Ah, Italy. Once again, it graces the screen with beautiful scenery and spectacular panoramas. This time, however, when Angelina Jolie visits Venice, Italy gets the boot. The European cityscape just doesn’t offer as good a view as Angelina does. The mega-star has never looked better, especially with how fully she embraces the Italian-sexiness that several other actresses celebrated onscreen in 2010, notably Julia Roberts in Eat, Pray, Love and Tilda Swinton in I am Love. It’s only too bad, though, that while Jolie provides a whirlwind adventure, everyone else onboard The Tourist is about as much fun as a trip to the Vatican.
The Tourist, though, is a delightfully convoluted caper. True, one would expect something a little more substantial from a script by three Oscar winners, but as escapist fare, the film does all right. The adventure begins when a team of investigators, led Inspector John Acheson of Scotland Yard (Paul Bettany), trails Jolie’s Elise Ward through the streets of Paris. Acheson et al are on a manhunt for Alexander Pierce, a financial crook who owes the UK roughly three-quarters of a billion pounds in back taxes. Elise is their only lead on Pierce, and she gives them the slip by making it from her sidewalk café to the Gare du Lyon, where she hops a train for Venice. Onboard, she cosies up to Frank, an unsuspecting American tourist played by Johnny Depp. Naturally, Acheson manages to get some of his men onto to train, and they quickly assume that Elise is in the midst of a rendezvous with Pierce. 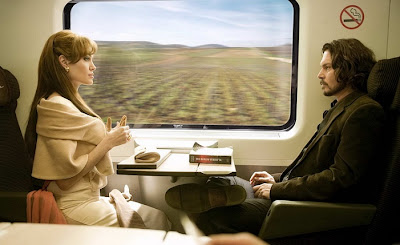 On the train, Elise and Frank engage in some witty, albeit contrived, banter that references everything from To Catch a Thief to North by Northwest. Yes, The Tourist is both as glitzy and as outlandish as the Cary Grant-Alfred Hitchcock escapades. Unfortunately, Florian Henckel von Donnersmarck does not do blockbuster entertainment as well as Hitch. The Tourist is the polar opposite of FHvD’s last film, The Lives of Others (2006’s Oscar winner for Best Foreign Film). The Lives of Others is a sparse production, but also a robust and politically charged espionage thriller. It’s a bit of a surprise, then, how frequently some overblown aesthetics and a distracting score mar The Tourist. (Not to mention one of the most preposterous endings in recent memory.) It’s not all bad, though. Much of the film is beautifully composed and pleasantly stylish. 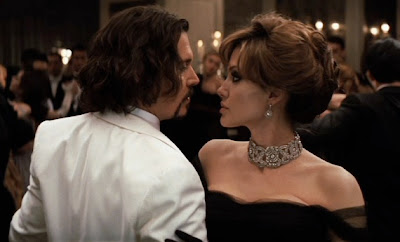 Likewise, the cast is rather uneven. Johnny Depp is shockingly boring as Frank. Depp’s trademark zaniness might have come in handy in The Tourist and drwan out the humour from the more ridiculous moments of the script. Since he performs the role on autopilot, however, much of the film falls flat. (Barbara Walters might have been less stiff and awkward in this role.) Likewise, the supporting cast is uniformly dull, though one should expect that the minute Rufus Sewell appears onscreen. Jolie seems to be the only actor in the mix who understands that one can act and have fun at the same time. Jolie, moreover, demonstrates that by taking such delight in her performance, so too will the audience.
Like most trips, though, The Tourist is more fun than not. As always, there are a few unnecessary diversions and annoying travel companions; however, if one accepts the bumpiness of the ride and takes it for what it is, it’s a pleasant escape. And one can certainly find a worse tour guide than Angelina Jolie!
Posted by Pat Mullen at 12/13/2010 01:54:00 PM