The Days that We Have Seen 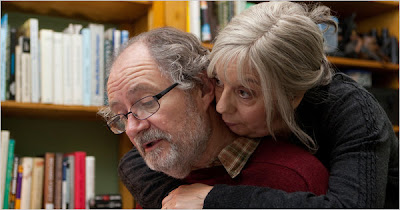 It’s funny to review Another Year immediately after Blue Valentine. The latter film presents the exuberance of finding love, but it also depicts the difficulty in maintaining such interpersonal harmony forever. Another Year, on the other hand, proposes that finding love is a necessity.
Another Year, like Blue Valentine, focuses primarily on one couple: Tom and Gerri, played with jolly good humour by Jim Broadbent and Ruth Sheen, respectively. As the title of the film suggests, the story recounts another year in their marriage. Tom and Gerri seem quite happy together, and there’s no reason they shouldn’t be: they are sweethearts from their university days, and both of them have found moderately successful jobs in which they’re happy (he’s a geologist and she’s a counsellor). More importantly, though, they have a grown-up son, Joe (Oliver Maltman), and they’ve grown old together making the best of things and enjoying life as a family. 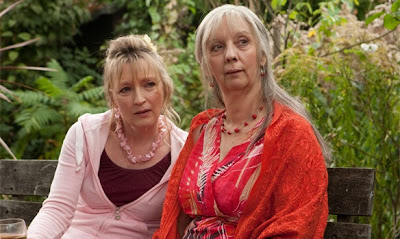 Writer/director Mike Leigh contrasts Tom and Gerri’s good fortune by introducing several of their closest friends, many for whom “another year” connotes another step towards failure. The first of Ruth’s friends (and the most frequent to appear) is Mary, played by Lesley Manville. Mary works as a secretary at the hospital where Ruth counsels. The two have been friends for years, and Leigh demonstrates the strength of their relationship through a scene depicting an after-work drink at the pub. There Mary banters to Ruth about how proud she is with her life. Ruth never exhibits the slightest judgement, even when Mary pounds back another glass of wine to prove her point (or, more likely, to reassure herself).
Despite Mary’s strong appearance, Manville deftly reveals Mary’s anxiety over finding a mate. Throughout their chat, Mary’s eyes dart around the room – she’s on the prowl, searching for any man who can be fooled by her age. In other scenes, Mary seems desperate for the same security that Gerri has with Tom. Even with Joe does Mary become too forward, which makes the isolation of the film’s loveable lush even more disheartening.

Come summer, Tom and Gerri host a barbeque for Tom’s good friend Ken (Peter Wight). Like Mary, Ken is alone. He’s a bit of a boozehound, too, which seems to be the first signifier of life’s unfairness. Ken also has a soft spot for Mary, and the barbeque may all be a ruse by Tom and Gerri to set their two friends up. Mary, however, is more excited by the sexy new car she just bought, and she flaunts it about like a trophy of her spinsterly strength. “I’m like Thelma and Louise,” she says during the fading summer hours.
As the seasons change and the days get darker, so does the film. In not only narrative and tone, but its colour palette changes as well – Leigh does a remarkable job of reflecting the mindset of his characters. Leigh’s fly-on-the-wall portrait of Tom and Gerri’s marriage, and the specific dates that mark another year gone by, offers a touching slice of life: it seems that there is much to look forward to in growing old, if one has the same ingredients as Tom and Gerri. 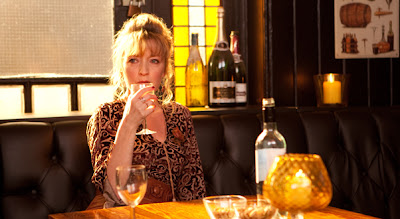 There’s something about Mary, though, that elevates Another Year beyond greatness. Manville’s face expresses more emotion and substance than several pages of Leigh’s impeccable dialogue. Mary’s sad eyes and quivering chin offer a vexing contradiction in putting on a brave face to mask one’s insecurity. Particularly in the final shot of the film, when the camera pans around the dinner table and comes to rest on a medium shot of Mary with all the life drained from her face, the film ends with a sorrowful note of regret. As Mary’s eyes droop and she consoles herself with another glass of Chardonnay, the expression on Manville’s face suggests that Mary ultimately resigns from life and accepts her fate as an old maid. Manville’s final showpiece in silent acting is more shattering than the heartache of Blue Valentine.
Another Year presents a realistic and humanist portrait of reconciling one’s aspirations with the unforeseen consequences of life. Leigh’s astute script and the note-perfect efforts of his ensemble – particularly Manville – make Another Year his most poignant film to date. Another Year is essential for moviegoers young and old.

Another Year plays at The Bytowne until Feb 3rd, and again March 1-3.