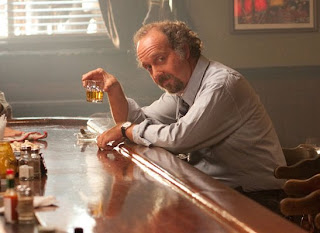 The HFPA put on a decent show tonight. Ricky Gervais was also funny as the host, although I suspect he may be discovered in the trunk of a car by the night's end...As expected, The Social Network swept the Golden Globes with 4 wins including Best Picture (Drama) and Best Director for David Fincher. I'm very happy that Natalie Portman and Colin Firth won in the dramatic leads, and also with the wins for Carlos and the sensational Claire Danes in the Miniseries/ TV Movie Categories. The highlight of the night, however, was Paul Giamatti's Best Actor win for Barney's Version. Giamatti's performance is among my favorites of the year, and I expected Jake Gyllenhaal to take the prize for Love and Other Drugs. I'm also happy that Giamatti won because he gave a great speech that celebrated Canada - how nice to see Canadian film acknowledged for once!

As far as my predictions went, I did ok: I missed three, although two gaffs went to the nominee for whom I was rooting. The other was In a Better World for Best Foreign film, which I haven't had a chance to see. Winners after the cut.