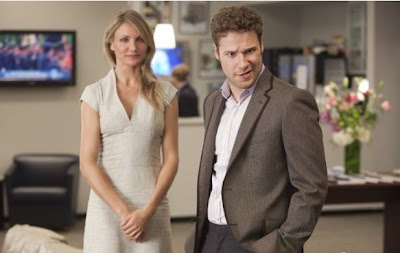 Britt’s obnoxiousness is drastically heightened by the arrogance of Seth Rogen. Rogen's boorish antics work well in a Judd Apatow movie, but they quickly grow tiresome in The Green Hornet. Rogen is so caught up in his pompous/arrogant frat boy routine that The Green Hornet often falters in the funny bits. It all seems juvenile and desperate, and a complete waste of ninety million dollars. (And significantly more brain cells!) 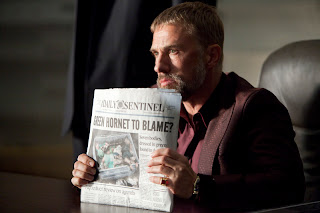 The Green Hornet becomes more disastrous via the stylistic efforts of art house director Michel Gondry. While Gondry’s quirky superimpositions and kinetic editing work wonders in Eternal Sunshine of the Spotless Mind, they prove fatal to The Green Hornet. Gondry’s visual flairs, moreover, only appear sporadically and thus disorient the viewer. They also make the film uneven and cheesy. Actually, Gondry’s cheese complements the hamminess of Rogen’s performance quite nicely.
The Green Hornet offers a perfect example for any film snob eager to lament Hollywood as an offensive assembly line producing nothing more than idiotic garbage. The sad thing is that The Green Hornet makes that appear to be the case, for despite all the razzle-dazzle of the production, the film is pretty dull. Regardless, The Green Hornet will undoubtedly be back for a second go, as the ending of the movie suggests. At least bees die after their first sting!