Prepared to be Scorched 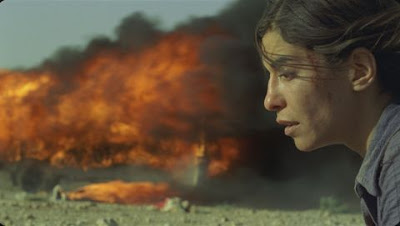 So many films rely upon the ideal that equates the discovery of truth with freedom. Incendies radically subverts this fairy tale ideology and suggests that truth is neither discernable, nor knowable, nor desirable. Based on the acclaimed play by Wajdi Mouada, Denis Villeneuve’s adaptation of Incendies is a harrowing return journey through incomprehensibly dire politics and suffering.
The film offers two narratives, both of which send their protagonists on an emotionally draining odyssey. The present day story features twins Jeanne and Simon Marwan, played by Mélissa Désormeaux-Poulin and Maxim Gaudette. Jeanne and Simon are in the process of reading the last will and testament of their mother. Their notary, and long-time friend Jean (Rémy Girard) offers them two letters from their mother: one is to be delivered to their father, the other to their brother. The existence of the two is a startling revelation for the twins, as neither received mention from their mother during her lifetime. Simon refuses to give in to his mother’s posthumous game, but Jeanne opts to search in hopes that meeting her father and brother will settle the troubles of the past. Her decision sends her to the Middle East, from which her mother fled during wars and political crises of the mid-1970’s. 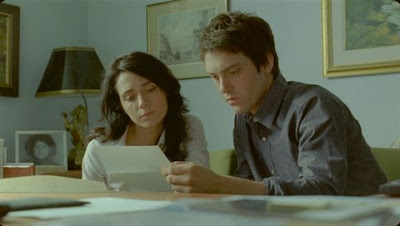 As Jeanne’s quest raises larger questions about her mother’s past, Incendies cuts back and forth to chronicle the events that eventually led her mother, Narwal (Lubna Azabel) to Canada. The story of Narwal’s survival is astonishing: her narrative begins with her narrowly escaping an honour killing at the hands of her brothers. Narwal has brought shame on her family by openly seeing a Muslim man and becoming pregnant. (Narwal is a Christian.) As a result, Narwal’s family sends the baby away after delivery; however, Narwal’s aunt tattoos the baby so that Narwal can one day find her son. The loss thrusts an understandable fixation upon Narwal and she crosses the violent terrain of her war-torn nation to get him back. 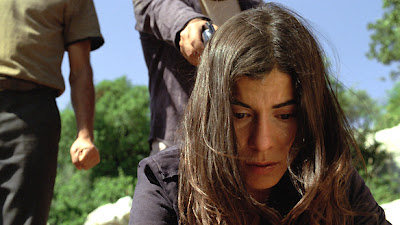 The successive scenes of Incendies culminate not so much as a slow burn, but more like a series of powder kegs that erupt with maximal force. The centrepiece of the film is also its most emotionally exhausting moment: while en route to a rural town, the van in which Narwal travels is stopped by Christian militia, who execute the driver and then open fire on the vehicle they assume to be full of Muslims. They then set fire to the van, and Narwal narrowly escapes by promoting her faith. She emerges from the event completely traumatized and psychologically singed by the violent fundamentalist politics. The scene leaves one breathless, and the length it takes the viewer to recover almost mutes the scenes that follow. The power of the scene nonetheless demonstrates Villeneuve’s remarkable skill in orchestrating a complex and emotionally explosive film. 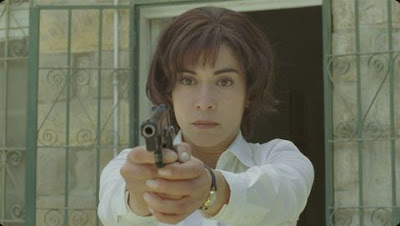 Overall, the production of Incendies is equally flawless. Azabel is excellent as Narwal, and the supporting cast members are equally fine. The film also features a phenomenal sound design that repeatedly marks Narwal’s trauma by reviving the ringing that surely plagued her ears incessantly during the gunfire and terror that ultimately brought her to Canada. Villeneuve also employs a strong soundtrack that smartly combines a sombre score by Grégoire Hetzel with a series of contemporary pop songs that add to the film, rather than detract. (The film uses “You and Whose Army” by Radiohead to particularly good effect.) Finally, the desaturated cinematography by André Turpin exploits the barrenness of the Middle Eastern landscape to accentuate the bleak prospects of the protagonists.
As Narwal and Jeanne/Simon’s journey both reach their climax, Incendies offers a conclusion whose power rivals the film’s turning point. That Incendies has such an extreme emotive effect defies the conventional need for narrative closure and clean resolution. Villeneuve’s film, furthermore, seeks not to understand or justify the horrifying politics or consequences of the characters’ actions; rather, as he does in Polytechnique, Villeneuve suggests that extreme acts of violence defy comprehension or justification. The overwhelming toll of the film further implores a critical evaluation of the events. Incendies is a tremendous film whose power leaves one smoldering and scorched.

Make sure to see Canada's Oscar nominee for Best Foreign language film! Incendies plays at The Bytowne until Feb 10.