Teardrops on My Guitar 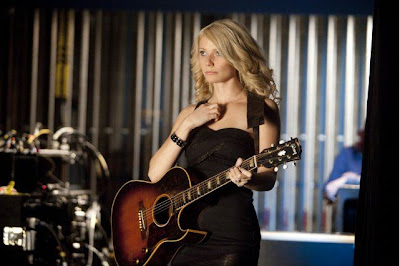 At approximately the same time last year, almost to this very day, Crazy Heart opened in wide release and treated audience to the performance of Jeff Bridges as Bad Blake, a down and out country star hoping to make a comeback. Twelve months later, Gwyneth Paltrow appears as Kelly Canter, a country star who has hit rock bottom after losing one fight too many to a flock of Wild Turkeys. Like Bad Blake, Kelly’s hoping for a return to fame and like Bad Blake (again…) she needs just one song to make things right.
The parallels between Country Strong and Crazy Heart are the largest impediments to the former film being a greater success. In terms of narrative, the films are not exactly twins, although the similarities are numerous: in Crazy Heart, Blake falls for Jean (Maggie Gyllenhaal), a young reporter who seems too good for him. In Country Strong, Kelly’s beau is a young country star named Beau (played by Garrett Hedlund), whose innocent star-potential risks being corrupted by Kelly’s toxic alcoholism. Similarly, Crazy Heart features a symbolic subplot of Blake trying to make amends by caring for (and losing) Jean’s son, while Country Strong features a more heavy-handed thread in which Kelly cares for a wounded bird that she names Loretta Limb. The pace and look are roughly the same in both films as well, albeit somewhat slower and cruder this time around. Heck, even the font of the opening credits looks the same! Despite the numerous overlaps between the two, Country Strong can still be appreciated as more than a Dixie Chick redux of Scott Cooper’s 2009 film. 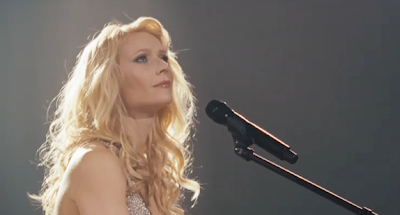 While Gwyneth Paltrow does not fill the look of a grizzled has-been as well as Bridges does, she ultimately serves the role quite well. Particularly in scenes in which Kelly finds herself a sad mess with tears and mascara running down her face, Paltrow effectively goes behind the glamour of her character and exhibits the draining emotional toil of constantly living in the media spotlight. Paltrow also performs quite capably in her musical numbers (although she frequently forgets to play the chords while air-playing the guitar). Like Bridges, Paltrow sings surprisingly well. Moviegoers may remember Paltrow’s shaky vocals in Duets, but it seems that Gwyneth has rigorously trained her pipes during the past decade. Especially in Kelly’s final performance of Home, the song that motivates Kelly throughout the film, Paltrow hits all the right notes. 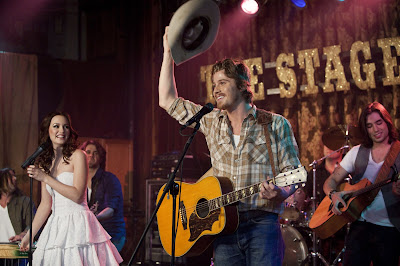 Country Strong benefits from a strong supporting cast as well. Garrett Hedlund fares exceedingly better as Beau than he did as Jeff Bridges son in Tron: Legacy (another Crazy Heart connection!); additionally, Hedlund offers the best musical performance amongst the cast and could easily transition himself into a lucrative music career. Tim McGraw also adds another impressive character role to his résumé after his successful turns in The Blind Side and Friday Night Lights. Surprisingly, McGraw is the only member of the ensemble who does not perform a musical number. Finally, Leighton Meester of “Gossip Girl” fame offers a serviceable performance that makes an annoying character less so.
The strength of Paltrow and the ensemble mostly compensates for the predictability of Feste’s script. Country Strong frequently adheres to the formula of most films depicting the tumultuous career of a star performer. The films lack of originality dulls its impact even further, as it frequently echoes films, such as The Wrestler, La Vie en Rose, or Ray that realized similar narratives with stronger cinematic flair. 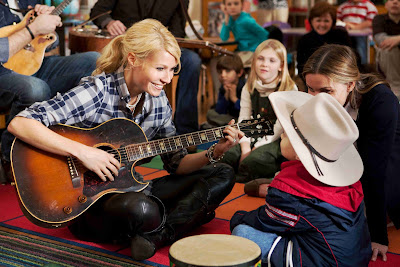 Despite the films recurrent lapses into routine, Country Strong redeems itself with a surprise ending. After Kelly’s final performance, Feste takes the film into unexpected territory: The twist of Kelly’s comeback offers a poignant commentary on the hardship of celebrity and elevates Country Strong above the banality of a Taylor Swift album.  If Feste had only been so fearless throughout the rest of the film, Country Strong may have equalled the pedigree of other tragic tales that have gone before it.
Posted by Pat Mullen at 1/08/2011 02:25:00 PM