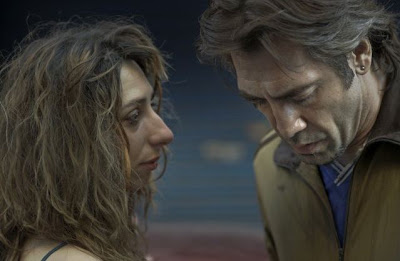 Biutiful, the fourth film by director Alejandro González Iñárritu, is ugli on the outside, but pritty on the inside. As the title suggests, though, imperfection is one of film’s assets. It’s also the film’s downfall, because Iñárritu offers an unrelentingly bleak odyssey that almost collapses under the weight of its own misery. Fortunately, the strength of Javier Bardem’s lead performance as Uxbal easily sustains the burden of Iñárritu’s heaviness and makes Biutiful a compelling film.
Bardem’s Uxbal seems like a shady character. He’s somehow implicated in black market dealings – his job is mostly relegated to paying off the cops. He also is involved in a human trafficking ring, but whether his job is limited to finding jobs for the migrants, or is as large as actually bringing them across the border, remains unclear. Either way, Uxbal profits from the hardship of others. Iñárritu makes it seem understandable, if not acceptable, because Uxbal does it all to support his two kids – He’s separated from their bipolar/addiction riddled mother, Marambra (played by Maricel Alvarez, who’s a real firecracker in the film). Additionally, Uxbal is dying of cancer, but despite the doctor’s prognosis, he refuses to believe the inevitable.
Uxbal also happens to be a psychic, and he makes a few extra bucks on the side by acting as a medium between the bereaved and the departed. Death looms everywhere in Biutiful, but thanks to the quietly powerful nature of Bardem’s performance, the moments in which Uxbal communicates with the dead are among the film’s strongest and most revelatory moments. It’s also in these scenes that Iñárritu offers his most inspired filmmaking through depicting spirits when they are ready to move from one world to the next. Some of the ghosts, like Uxbal, are not ready to leave, and Iñárritu stages their resistance with bone-chilling effectiveness. It’s the stuff that nightmare are made of. 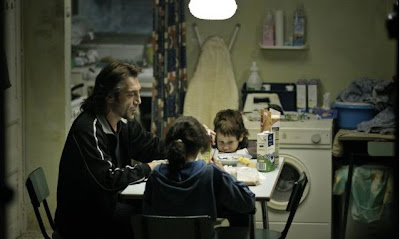 To heighten the horror, Iñárritu sets Biutiful within the backside of trendy Barcelona. The film takes place in alleyways, warehouses, morgues, and trade posts of the black market. The settings of Uxbal’s final days are all places of transience, filled with drifters and vagrants who have been pushed to the outskirts. Even his home is a run-down, roach infested hellhole. In part, the desolation of the film offers a biting portrait of globalization and migrancy. Iñárritu drives the point home quite explicitly by colour coding the subtitles so that viewers can realize the multiple dialects that compose the soundtrack. North American audiences, apparently, are too dumb to notice shifts from Spanish to Chinese (or too deaf).
The subtitles are merely one example of the director’s heavy-handedness in conveying the themes of the film. At times, Iñárritu creates smart visual parallels: for example, one scene features a shot of Marambra as she slowly exhales a wispy billow of cigarette smoke, which Iñárritu counterpoints with a shot of a smokestack pumping carcinogens into the atmosphere. (Uxbal’s cancer, however, would have sufficed as a potent metaphor for the degradation.) Unfortunately, though, Iñárritu runs amok with his message and he oversaturates the film with shots of homeless citizens, mouldy walls, and crawling bugs. It seems that there is nothing the director won’t fetishize in order to convey the wretchedness of it all.
Part of the problem with Biutiful could be that this is Iñárritu’s first film made without the collaboration of screenwriter Guillermo Arriaga. It’s not that the Biutiful is poorly written – more of the flaws stem from directorial choices – but the film falls short of the greatness of Babel, 21 Grams, and Amores Perros. It is nice, though, to see that Iñárritu can still tell a gripping story without relying upon the non-linear narrative that defines all of Arriaga’s scripts. Despite being the most straightforward of Iñárritu’s films, Biutiful also seems to be the most daring. It’s just unfortunate that Biutiful lacks the subtlety and the sense of release offered by his equally sombre precursors. 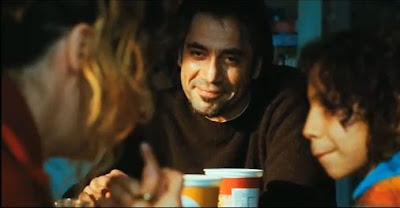 There is, however, a light at the end of the long dark tunnel of the film, and that’s Javier Bardem’s raw performance as Uxbal. Especially in the final act, when Uxbal does all he can to leave a bright future for his kids (for he lost his own father as a boy), Bardem is a stirring revelation. It’s amazing that a character with such humanity emerges from the same actor who terrified audiences as the psychopathic killer in No Country for Old Men. Bardem’s laudable work steers the barrenness of the film towards redemption, and through him, the biuty of the film resonates clearly.

Biutiful plays at the Bytowne in Ottawa until Feb. 24.