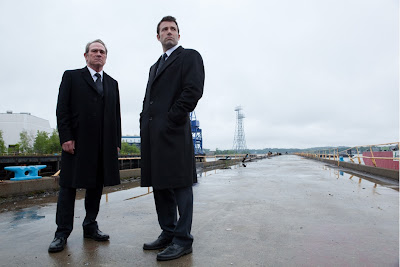 To live the American Dream: When dad heads off for work in the morning, he leaves his giant, well decorated house in the suburbs and he arrives at the office to clock eight or nine hours towards a six-figure salary. He rests easy because he knows that mom is taking care of the kids, and that there are two cars in the garage – each with a full tank of gas. It seems like a fairy tale in the first season of Mad Men, but viewers know that by season three, Don Draper reveals the Dream as nothing more than a cruel joke.
So does The Company Men, this impressive debut by writer/director John Wells. Wells’s film suggests that such idealism should go back to the 1950’s where it belongs. When Bobby Walker (Ben Affleck) is abruptly let go from his high-level sales job at GTX after years of hard work and loyal service, he joins a workforce of Americans who must pander their MA’s, PhD’s, and decades of experience for whatever job they can get. The greatest challenge for Bobby, however, is not finding a new job, but saving face to his wife, Maggie, (Rosemarie DeWitt) and his children. Bobby also masquerades around Boston as if he is still one of the company big shots: From keeping up appearances at the golf club to zipping around in his Porsche, Bobby fanatically clings to the hope that life will go on. He even turns down a construction job from Maggie’s brother Jack (Kevin Costner), acting as if manual labour is beneath him, even when Maggie goes back to work and insists that they are going to lose their house. 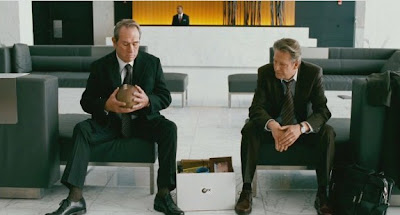 Two of Bobby’ co-workers, Gene (Tommy Lee Jones) and Phil (Chris Cooper), remain at GTX, saved only by their seniority. They both know that their time is limited, however, as they see more of their co-workers vacating their desks. Gene especially takes a dire perspective on the American Dream when the company’s President, and his best friend (Craig T. Nelson), dispenses with more of his employees so that the senior members can retain their luxurious lifestyles. 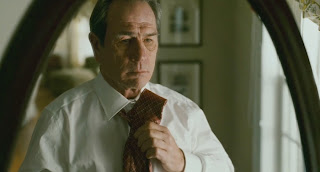 Wells unfolds the drama is a series of parallel storylines that follow Bobby, Gene, and Phil as they re-evaluate their business strategies and personal plans. Each story offers a smart analysis of how capitalism, etc. hits the average American hard within the contemporary market. Wells’s story is also well served by a top form cast (despite some struggles with their Bawhstin accents). Tommy Lee Jones is especially good as Gene, on whom the erosion of GTX has the most transformative effect, as is Rosemarie DeWitt as the strong and pragmatic Maggie. Overall, The Company Men displays an efficient workforce that produces a stirring parable. The potency of The Company Men diminishes only through its over-length.
With its astute take on recession-era America, The Company Men makes a nice companion piece to Jason Reitman’s 2009 film Up in the Air. Whereas the latter film depicted the consequences of the economic troubles through the moral reawakening of George Clooney’s suave terminator, The Company Men explores the other perspective. The film looks at the Americans who lost their jobs, and asks how a nation can recover when so many people are left stranded. Although The Company Men arrives in theatres over one year after Reitman’s film, the subject matter is hardly stale. Only two weeks ago did The Onion release a satirical article stating that the World Heritage Committee officially recognized the Gap between the Rich and the Poor as the Eighth Wonder of the World. As a result, The Company Men is quite timely, only it just doesn’t deal with the economic downturn quite as artfully as Up in the Air does. 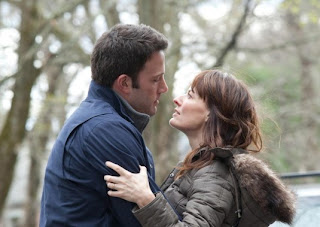 The Company Men nonetheless offers a touching portrait of difficult times. The film sounds sentimental, but rather than succumbing to feel-good corniness, The Company Men urges moviegoers to take a critical reappraisal of the circumstances that led to current economic woes. It also invites audiences to adopt a socially conscious attitude that is more oriented towards the needs of family and friends. The Company Men optimistically suggests that if moviegoers just have faith, courage, and, yes, enthusiasm, everything will be all right.
Posted by Pat Mullen at 2/07/2011 06:03:00 PM