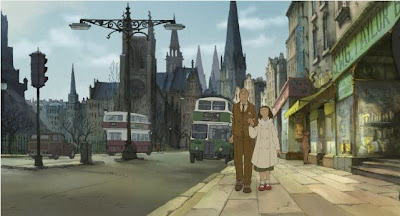 Just a few quick words today on The Illusionist, the new film by French filmmaker Sylvain Chomet. Like Chomet’s breakthrough film, The Triplets of Belleville, The Illusionist is a charming and whimsical tale. It also features exquisitely quirky animation, as well as some of the most biutiful beautiful landscapes rendered on film– the gothic landscapes of Edinburgh are the most striking in the film. In some ways, The Illusionist resembles an eighty-minute trek through a watercolour wing at an art gallery.
Despite the wonderful visual flair of The Illusionist, the film might have been stronger as an animated short, and not as a full-length feature. Like The Triplets of Belleville, the film has minimal dialogue – just a few mumbles and irks from the characters – and the slow-pace of the film does not always work to its advantage. The Illusionist, however, is driven by a beautiful piano score by Chomet, which works in time with the characters and often substitutes for dialogue. The film also becomes increasingly repetitive as its Parisian magician hops about the UK, doing odd jobs during the day and then performing in pubs or theatres at night. The Illusionist has little in terms of plot or narrative, and thus becomes a tedious series of familiar episodes. Chomet offers many offbeat scenarios and oddball characters, which make the film amusing, just not consistently so. 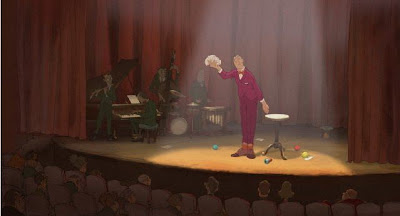 The film is also an exercise in nostalgia. The screenplay for The Illusionist is based on an unfilmed script by the late French filmmaker Jacques Tati. Shamefully, it is hard to say whether The Illusionist does him justice, never having seen one of Tati’s films; however, the film features a nice nod to the director when the illusionist runs into a screening of Mon oncle at a movie theatre. The similarities between the illusionist and Tati’s onscreen character suggest that Chomet’s magician is a respectful homage to Tati’s work.
The scene in the movie theatre occurs towards the end of the film; afterwards, The Illusionist becomes unexpectedly sad. The turn in the illusionist’s fate offers a sombre comment on changes in modernity and the like, but it’s surprisingly off-putting to emerge from an animated film feeling down and not rejuvenated by the magic of movies. Perhaps that is the irony of The Illusionist; since it’s about a magician, after all... one would expect him to conjure up the same joie de vivre that makes The Triplets of Belleville so exciting.
Posted by Pat Mullen at 2/13/2011 04:32:00 PM