Something Glorious comes to Blu-Ray!

Appearing on Blu-Ray and DVD today is Glorious 39, a spectacular hidden gem that is well worth seeking out. I saw Glorious 39 during TIFF 2009 and it absolutely entranced me. As far as festival favourites went that year, it was second only to Precious. 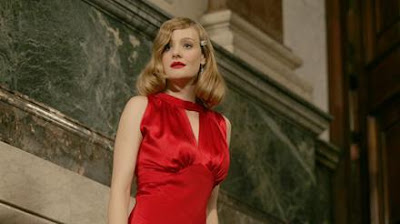 Set in the summer of 1939 – apparently, the most glorious summer Britain ever had – Glorious 39 tells of the calm before the storm. The film explores the paranoia of pre-war England through the eyes of Anne Keyes (Romola Garai), the adopted daughter of an aristocratic family. The film thus offers a chilling thriller, as well as an absorbing reconstruction of an aspect of history rarely captured on film: that in which Brits turned on their compatriots in order to quash anti-Nazi sentiment. I don’t want to say much else in terms of plot because the film quickly sneaks up on you, but through the treacherous inter-family treason at the Keyes estate, Anne quickly begins to see that wonderful summer as the transition between two worlds.
Written and directed by Stephen Poliakoff, the film exploits mundane aspects of the everyday to explore what happens when a nation is on the cusp of social turmoil. Glorious 39 has the intrigue of an Alfred Hitchcock film combined with fluid and stunning aesthetics that are reminiscent of Atonement. (And a beautiful score, too.) Anchoring the film is a showstopper of a performance by Romola Garai as Anne – such work should have made her a star. It didn’t, though, because the film unfortunately bombed in Britain in 2009 and never made it overseas. It’s surprising that the film didn’t take off, though, since it also features Bill Nighy, Julie Christie, and Christopher Lee (maybe the Brits just don’t like to air their dirty laundry?). Regardless, Glorious 39 is a great film and I’d proudly cite this direct-to-DVD treasure on my “Best of” list come December.