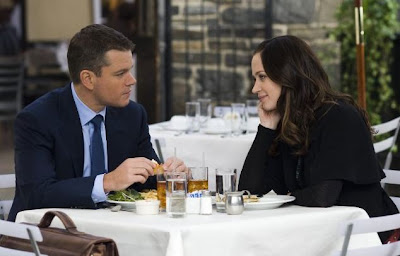 That unseen, unnamed man; he just loves to pull the strings, does he not? The Chairman never appears during The Adjustment Bureau (or does he?), but that doesn’t stop his myriad of fedora-clad henchmen from bending the laws of fate. It might all sound confusing, but this is actually a deceptively simple and straightforward adaptation of the short story by Philip K. Dick. It might just be that I’m a sucker for old-fashioned Hollywood love-stories, but The Adjustment Bureau is cinematic escapism at its best: it offers fast-paced entertainment, yet it avoids the idiocy that often accompanies such slick productions.
Much like the storytelling, the hero, David Norris (Matt Damon), turns out to be more than he appears. David is a suave and charismatic New York congressman running for Senator. Like a recent well-spoken politician, David’s campaign champions him as being a man of the people and he appeals to the younger demographic far more than his competitors do. David’s status as the front-runner in the race, however, takes a turn more abrupt than that of The Social Network when the New York Post runs a full-page photo exposing his frat-boy antics to the voters. 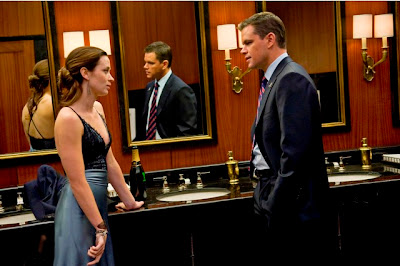 When David finally decides to concede defeat on election night, he recedes to the bathroom to rehearse his speech in private. While in the loo, he meets a gorgeous woman, Elise (Emily Blunt) on the run from security (she crashed a wedding). Elise offers David some impassioned political musings, and David returns the favour by sweeping her up in a big Hollywood kiss. From the first meeting between David and Elise, there is a palpable spark between Damon and Blunt, and it’s obvious that it’s love at first sight between the two characters. 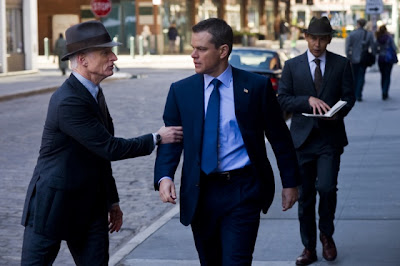 Elise stirs a new passion within David and affords him some new inspiration for his next campaign. A few weeks in to David’s new career, his life seems to all be going according to plan given his fresh new outlook and motivation; however, much like how he had a team of political wranglers advising his course of action during the first campaign, some men in well-cut suits force David’s career path into new directions. Headlining the team of “adjusters” is Richardson (John Slattery, wonderfully exploiting his Mad Men persona), who coyly explains to David that his chance encounters with Elise complicate the course they have mapped out for David’s career. Not surprisingly, David refuses to believe that he is not in control of his life, and takes careful measures to elude the adjusters. 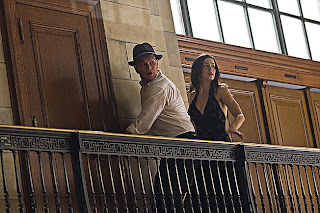 What sets The Adjustment Bureau apart from many other Hollywood films is how well the film blends the romance within the rest of the material. In fact, the love story fuels the narrative more than the sci-fi angle does. The Adjustment bureau thus avoids the pitfalls of films like, say, Wall Street 2, in which the love story feels like a superfluous bid at sentimentality and detracts from the strength of the film as a whole. The passion between David and Elise actually enhances the existential elements of the film, as it plays upon familiar prophesies of free will, fate, and true love. In addition, it helps that Matt Damon and Emily Blunt have terrific chemistry as the star-crossed lovers, and display some of the strongest and engaging work. (It’s a shame, though, that writer/director George Nolfi doesn’t use any of his great sci-fi powers to hypothesize how their children might look.) 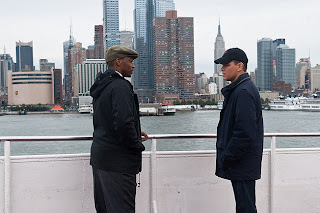 As David struggles to retain control over his own life, the film offers a compelling cat-and-mouse dynamic between David and the adjusters. At times, David receives help from his personal adjuster, Harry (Anthony Mackie). Harry seems to be the only adjuster whose beliefs are at odds with his own fate, and he thus becomes a pseudo-guardian angel to David when the Chairman commissions the Bureau’s biggest cat, Thompson (Terrence Stamp), to readjust David’s life for the last time. As Thompson pursues David throughout New York, Nolfi deftly exploits the convoluted intricacy of the modern urban setting and orchestrates the hunt through the labyrinthine cityscape.
The Adjustment Bureau also succeeds because Nolfi refuses to bog down the narrative in overly complicated metaphysics and complicated sci-fi jargon. Much of the forces behind the adjustments remain unexplained, or only minutely detailed, yet the omission of explanatory notes grants the film a great deal of clarity. Instead, the gaps within the theory enable viewers to conjure up their own questions in place of digesting well-explained hypotheses.  Is that not the mark of good science fiction?