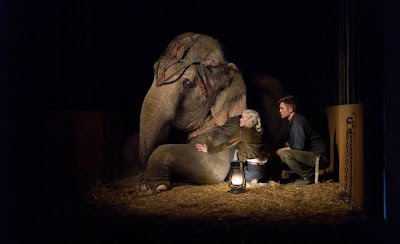 Did you ever see The Greatest Show on Earth, that lumbering, brain-dead, and ironically titled circus epic starring Charlton Heston that scooped the 1952 Oscar for Best Picture? Well, if you haven’t – and this is the first and only time I will say this – go rent it, because Water for Elephants is rife with references to Cecil B. DeMille’s three-ring circus. From the ring master costume of August (Christoph Waltz) to the similarities in appearance between Reese Witherspoon and the elephant-riding showgirl played by Gloria Graham, Water for Elephants provides many nods to the spectacular legacy of the circus within the cinema.
Unfortunately, though, while director Francis Lawrence (Constantine, I am Legend) does an excellent job of staging the circus performances, the drama of Water for Elephants crashes like a high-wire acrobat without a net (perhaps another reference to The Greatest Show on Earth?). It’s both surprising and disappointing that Lawrence capitalizes on the circus numbers so rarely, too, since the awesome spectacle of the circus is so well-served by the big screen. The problem may be that Lawrence is an odd partner for screenwriter Richard LaGravernese, whose previous credits, including PS, I Love You and The Horse Whisper, ensure that the adaptation of Water for Elephants focuses more on mushy romance than high-wire thrills.

The majority of the narrative concentrates on Jacob (Robert Pattinson), who runs off and joins the circus. (The sudden death of his parents forces him to leave his veterinarian studies right before the exam.) Fortunately, for Jacob, the Benzini Brothers’ needs a vet. Sometimes the job requires Jacob to carry water for elephants, sometimes it makes him scoop poop. Most of all, though, the job allows Jacob to work closely with Marlena (Witherspoon) the blonde-bombshell/star attraction of the circus. In addition to being the girl who walks with the animals/talks with the animals, Marlena is married to the boss, August, who quickly appears to both violent and volatile. At the circus, three-rings a love triangle make.

As Jacob and Marlena pet the animals and flounce about on a whisky-drinking elephant, the script by LaGravernese turns the readable romance of Sara Gruen’s best-selling novel into low-grade schmaltz. Water for Elephants abounds with hokey moments in which Jacob and Marlena express their love via their mutual affection for the animals. While it seemed romantic in The Horse Whisperer, it has become cliché since 1998. Water for Elephants also transposes Gruen’s prose into corny voice-overs that, while not nearly as heavy-handed as the narration of The Greatest Show on Earth, add nothing to the drama.

Pattinson’s wooden delivery also makes the monologues overly detrimental to the film. Overall, the Twilight star just can’t carry Water for Elephants. Jacob is a role that an actor could easily have embellished with life and enthusiasm, but Pattinson plays it all with indifference. Not only does his lack of gusto severely undercut the dark turn of the final act, it makes the first two-thirds of the film simply boring. Water for Elephants provides Pattinson with numerous moments to show off his skills, but he fails to make an impression (unlike his Twilight co-star Kristen Stewart, who has defied her critics with The Runaways and Welcome to the Riley’s). Co-stars Reese Witherspoon and Christoph Waltz, however, inject some life into the drama, particularly in the last twenty minutes of the film when they are given the opportunity to carry the production. Waltz is especially good, although August differs little from his character Hans Landa, for which he won an Oscar for Inglourious Basterds. Hal Holbrook also offers a touching cameo as the elderly Jacob. Halbrook’s part is severely reduced from the novel, but not at the disservice of the film since these scenes offer some of the corniest moments – “I’m not running away,” Jacob says at the end of the film. “I’m coming home.”

Fans of the novel by Sara Gruen will surely delight at the film’s fidelity to its source, but the reluctance to stray also betrays how much Water for Elephants plays it safe. The film is almost bloodless is its orchestration of Gruen’s novel, which is disappointing since the source is merely a good novel and not a great one. The filmmakers seem too hesitant to explore the dark underside to circus life that Gruen hints at in the pages of her tale, and many of the scenarios that have the potential for dramatic potency, such as the ‘Red Light’ moments in which August ejects his employees the train instead of paying them, are mostly rendered in passing. Nevertheless, it’s only through Waltz’s performance as August that one can speculate at what Water for Elephants could have been. The film need not be as macabre as, say, Carnivale, but that might have been an avenue to success since Water for Elephants avoids the operatic spectacle of something like The Greatest Show on Earth.

There is, however, much worth praising in Water for Elephants. The production values are first rate, especially the costumes by Jacqueline West and the production design by Jack Fisk. The cinematography by Rodrigo Prieto is also quite good, especially when framing August in silhouette while introducing the big show. Like a real circus, though, the arts and crafts can only add to the entertainment of Water for Elephants and not make up for the lack thereof. Life might be the greatest show on earth, but Water for Elephants sure isn’t.
Posted by Pat Mullen at 4/26/2011 01:48:00 PM