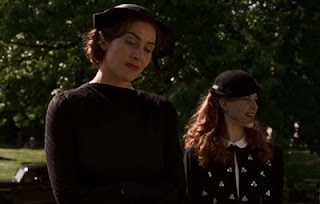 I'd also like to get a few words on Mildred Pierce. The HBO mini-series ended last night with a two and a half hour conclusion, and all I can say is "wow!" I was in awe of the Todd Haynes's melodrama after the first week, but Mildred just picked up steam as it moved along. Lots of the kudos belong to Kate Winslet, who gives some of her better work in the title role. I was also thrilled by the performance of Evan Rachel Wood, who appeared as the older Veda in last night's episodes - that was the daughter from hell I'd been hoping to see all along. Top marks go the the rest of the supporting cast as well: Guy Pierce, Brian O'Byrne, Mare Winningham, and Melissa Leo.

As I said after the first week, Mildred works best because it steers clear of the 1945 Joan Crawford film, and offers a different take. This Mildred is just as good as the previous version, but more importantly, Haynes crafts the film in a way that allows you to appreciate both films in different ways. Mildred Pierce is easily the best HBO miniseries or movie since Angels in America.

*As an aside note, classes are done and final essays/exams are underway, so full reviews will be returning soon!