'Bang' is a Bit Off Target 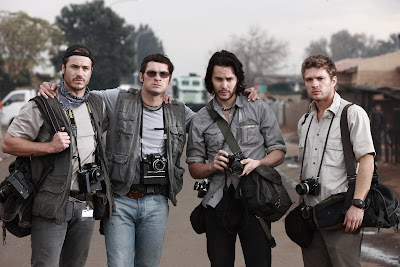 The Bang Bang Club is one of those movies that squeak by with a recommendation mainly because it is based on a true story. The film gives a quick snippet of the lives of a quartet of South African photojournalists whose ground-breaking and influential photographs garnered attention to worthy causes and in turn earned the photogs wide acclaim under the nickname “The Bang Bang Club”. The drama focuses primarily on two of the four Bang Bangs, Greg Marinovich (Ryan Phillippe) and Kevin Carter (Taylor Kitsch), and it chronicles their passionate efforts to put themselves into the heat of mass riots and violence in order to capture the truth on film.

The Bang Bang Club tells their story with an earnestness, frankness, and depth befitting to the character of its subjects. The film is particularly successful in delving into the moral dilemma of how much of a distance, if any, a photojournalist should leave between exposure and activism. It’s unfortunate, however, that the film is not told with greater force and clarity. The artistic and technical efforts of The Bang Bang Club are regrettably scattershot and sloppy. The aesthetic of the film is particularly inconsistent: some scenes stand out with their striking golden hue, but that could partly be attributed to the fact that subsequent scenes seem carelessly lensed and coloured. The film also varies wildly in its use of soft and harsh light, and it overuses canted angles to the point of distraction. Consequently, the haphazard camerawork becomes off-putting (and ironic) in this tale of esteemed photographers.
The drama orchestrated by director Steven Silver also fluctuates in tempo and style, and The Bang Bang Club frequently seems like a film in search of its own identity or purpose. Nevertheless, the subject matter of the film and the courage of the characters are consistently compelling, so The Bang Bang Club succeeds in spreading awareness of a worthy story. If only the film carried the same quality and conviction as the many photographs of The Bang Bang Club that appear throughout the film.
Posted by Pat Mullen at 5/24/2011 10:14:00 AM