Pirates of the Caribbean: On Stranger Tides ★★★

Summer Movie Season gets its official launch with the fourth instalment (fourquel?) of The Pirates of the Caribbean franchise. As far as blatant cash-grabs go, I have seen far worse than this (and I suspect we will see plenty with the unprecedented number of follow-ups hitting the big-screen in the upcoming months). On Stranger Tides certainly redeems the franchise from the inanity of At World’s End, and as Johnny Depp, Geoffrey Rush et al. swashbuckle to the jovial theme of the series, this Pirates lives up to the aim of its predecessors and provides pure escapism that the whole family can enjoy. 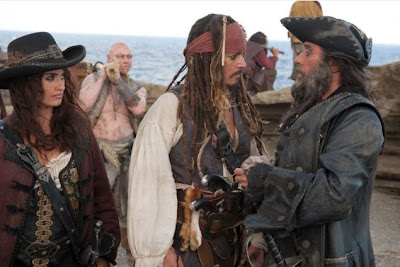 On Stranger Tides finds Captain Jack Sparrow (Depp) on the hunt for the elusive Fountain of Youth. This time, however, Captain Jack is taking orders from some new pirates: the fearsome Blackbeard, appreciatively played by Deadwood’s Ian McShane in Al Swearengen mode, minus the expletives. Jack also reports to Blackbeard’s sexy and far more compassionate daughter Angelica (Penélope Cruz), who also happens to be Jack’s old flame. Needless to say, they did not end on good terms, so there’s ample heat between them. Also in the hunt for the Fountain of Youth is Barbossa (Rush), but this time he sails in the name of His Majesty’s Army and not as a pirate. As usual, Depp is fun in his Keith Richards/PePe LePew/woozy drunken transsexual mode as Sparrow, and Cruz injects some much-needed feistiness to the production. Rush and McShane add some worthy foes to the film as well, while brief cameos by Keith Richards and Dame Judi Dench contribute some more colourful moments to the film. 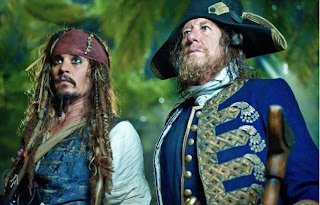 The spirited performances are a godsend, since On Stranger Tides suffers from the inevitable familiarity that comes when a film arrives this far down a franchise. Some of the scenes have a real sense of déja-vu, which becomes more noticeable through the film’s videogame-like structure that sees Jack and company battle a series of foes of increasing menace. The villains go from zombie-pirates to vampiric mermaids, to the expected showdown with Blackbeard at the film’s climax. The action sequences are nevertheless spectacular showcases for the latest special effects, and the choreography of the swordplay certainly has a better rhythm under the new direction of Rob Marshall (Chicago, Nine).
There might be a few barnacles on the Black Pearl, but Captain Jack is not sunk yet. Pirates of the Caribbean: On Stranger Tides undoubtedly has its shortcomings, but the film is anything but boring. This fourth entry in the Pirates series might be a good note to end on, too, since the adventure still resembles the thrill ride of the original.
Posted by Pat Mullen at 5/24/2011 10:21:00 AM