The Mad Man of Documentary 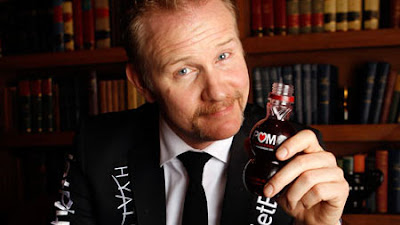 Is product placement or embedded market in film and television a bad thing? When I think about the novelty of noticing Carmela’s big Yahoo coffee mug on The Sopranos or appreciating how much the latest BMW roadster helps James Bond save the day, it seems that the odd endorsement harms nobody. In some cases, product placement actually helps – case in point being the “Junior Mint” episode of Seinfeld. “The Junior Mint” shows that not only is a small chocolate-coated peppermint patty very refreshing, it’s also a great comedic ploy when mixed with an open surgical cavity.
The mutually beneficial relationship between art and commerce serves as the premise for the latest meta-documentary by Super Size Me director Morgan Spurlock. In Pom Wonderful Presents: The Greatest Movie Ever Sold, Spurlock examines the ins and outs of brand integration and product placement within the film industry. Like he does in Super Size Me, Spurlock puts himself as the subject of his own inquiry in Pom Wonderful, and he interrogates the pros and cons of product placement by selling his own film to advertisers. As a result, sponsors pay a premium to have them and their products depicted favourably and figure prominently in the film. 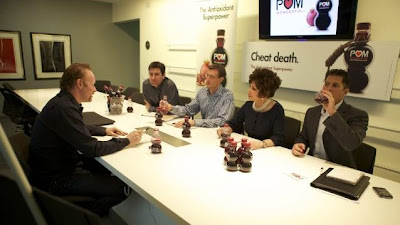 The concept is rather ingenious because it allows Spurlock to examine the complexity of product placement without succumbing to the criticisms burdened upon artists who are perceived as ‘selling out’ by using their work to turn a profit. In turn, whenever Spurlock compromises some of his intent in order to appease the sponsors, such as he does during an ad pitch to the board of Pom Wonderful, the change merely supports the case posed by the documentary of the extent to which art needs to be mindful of its financiers. The film also addresses the perils of saturating the marketplace in aggressive branding techniques. Spurlock pays particular attention to the tensions forced upon the America’s schools as they educators try to raise the necessary funds to further the studies of their pupils, but by doing so without compromising the sanctity of a child’s education. Much like the film, it seems that a class brought to you by Pom Wonderful is better than no class at all.

Spurlock also strengthens the case for and against product placement by interviewing civilians, ad men, psychoanalysts, policy makers, intellectuals, and fellow filmmakers, all of whom have varying opinions on the necessity/morality of the process. In addition, the interviewees inadvertently serve as brand ambassadors for Spurlock’s partners, as the interviews are set in Jet Blue airplanes/lounges, Hyatt Hotels, or Sheetz gas stations. The subjects also receive a complementary bottle of refreshing Pom juice to quench their thirst. Ralph Nader even gets a comfy pair of Merrell shoes.
Pom Wonderful Presents: The Greatest Movie Ever Sold features much of Spurlock’s trademark humour as he endorses the products of his sponsoring partners while simultaneously satirizing the process. This leads to the 1.5 million dollar question: does product placement actually work? This question seems to be the one that the film takes for granted. While decades of contracts between filmmakers and advertisers suggest its efficiency, the film does not fully prove the case for or against product placement. Moreover, the kitschiness that Spurlock uses in his endorsements throughout the film frequently undercuts the sincerity of that his sponsors so emphatically desire for their advertisements. By the film’s end, it's debatable if all the partners get their money’s worth, or if they are being bamboozled by one of the greatest cons in documentary filmmaking. 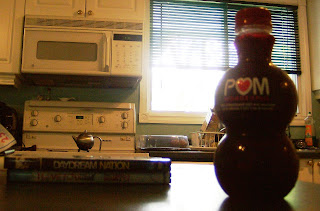 Upon reflection, although I took note of Carmela’s coffee mug and Kramer’s Junior Mint, I still use Google as a search engine and I have never bought a box of Junior Mints. However, to Mr. Spurlock’s credit, I did buy my very first bottle of Pom Wonderful today (pictured above). It was delicious.
Pom Wonderful Presents: The Greatest Movie Ever Sold
plays at The Bytowne until May 23.
Posted by Pat Mullen at 5/18/2011 06:01:00 PM