In a better world, there would not be any bullying. In a better world, there would not be any violence or discrimination. In a better world, everyone would be friends and dance happily around the meadows in celebration of the fact that we are all the same. Such plucky idealism seems to be the manifesto of Susanne Bier’s surprisingly overwrought examination of today’s youth as they grow up in a rapidly changing world.
In a Better World focuses on two children, Christian (William Johnk Nielsen) and Elias (Markus Rygaard), who befriend one another after a run-in with the schoolyard bully, Sofus. Elias is a meek child who passively accepts the constant torment; however, Christian is new to the school and refuses to become the new pariah. He fights back against Sofus, so violently in fact that he and Elias no longer have anything to fear. Christian’s rage, however, seems bubbling to the point of combustion and can barely be satisfied by all of the violent video games that he plays.

In ignorance of the boys’ trouble are their parents: Claus, Christian’s father (played by frequent Bier collaborator Ulrich Thomsen) and Elias’s parents Marianne (Trine Dyrlhom) and Anton (Mikael Persbrandt). The film gives scant backstory to Claus’ inept parentage, except that he works long hours and his wife recently died. In a Better World is more fair to Elias’s parents: both are hardworking doctors and earnestly devote a lot of time in educating Elias to do the right thing. Marianne and Anton falter (or In a Better World does) when they fail to admit that their ongoing separation might be influencing Elias’s poor behaviour. Ah, video games and divorce… so that’s why the world is going to hell.

Bier also cross-cuts between Denmark and a refugee camp in Africa where Anton volunteers for long periods. The anonymity of the camp suggests that it serves as a microcosm for all of the Third World’s ills, and is but one of many ways in which Bier’s film sidesteps addressing any real issues. At the makeshift clinic, Anton treats the victims of a sub-Saharan crime lord who rapes and mutilates his victims in the most gruesome form imaginable. Unfortunately, In a Better World simply treats the Big Man as a larger variation of Sofus, so thus film thus reduces large-scale cultural violence to a mere school-yard scuffle. Moreover, Bier’s direction and the screenplay by Anders Thomas Jensen treat both the Danish and the African storyline with comical heavy-handedness. As a result, In a Better World becomes a condescending sermon that dangerously depoliticizes its subjects and instead celebrates shared aspects of humanity on a transnational scale. The film in no way interrogates the issues at hand and rather encourages some feel good catharsis by positing the predictable liberal Band-Aid that preaches that we are all the same. The film has as much agency and force as a toothpaste commercial. 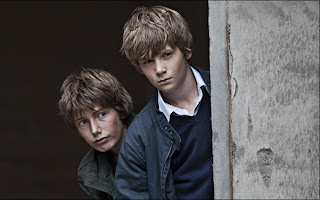 Equally surprising is the lack of artistic flair with which Bier tells the story. Her past work, such as Brothers or Things We Lost in the Fire, demonstrated an intense, raw aesthetic that revealed larger aspects of the human condition by depicting them on a small scale and then zooming in. In a Better World, however, is as generic as Jim Sheridan’s uninspired 2009 remake of Bier’s Brothers. At times, the film resorts to unnecessary cutaways to wind-turbines and sun-scorched grass. They are an idyllic little bunch of inserts, but they add nothing to the film. With the exception of some striking use of soft natural light, In a Better World displays little of the artistry that makes Bier’s previous films so exciting.

To the film’s credit though, there is still much to admire. While the African storyline falters gravely, the portion set in Denmark is consistently compelling. The film chronicles the descent of Christian and Elias in misguided hooliganism quite well, as well as Marianne’s struggle to do the best for her son. Dyrlhom’s performance is exceptionally good, as frequently saves the film from soap-opera melodrama. The work by young actors Nielsen and Rygaard is also impressive.

For a film that scooped this year’s Academy Award for Best Foreign Language film, In a Better World is hardly the most impressive or progressive film to demonstrate the strength of international films. Particularly when Bier chooses to end the film by cutting back to Africa and fade out on a group of anorexic-African children as they wave and pursue Anton’s van, In a Better World sets representations of the Third World back several years. A real disappointment, In a Better World can best advertise itself as the only Oscar winner less worthy than The Counterfeiters or last year’s The Secret in Their Eyes. In a better world, Incendies would have won the Oscar.


In a Better World is currently playing at The Bytowne