Saw some Hot Docs This Week!

Spent five wonderful days at Hot Docs in Toronto! Here's a recap of what I saw:
Day 1
Matchmaking Mayor ★★★½
(Slovakia/Czech Republic, 80 min.)
Dir: Erika Hnikova
Two’s a Crowd ★★★★
(USA, 20 min)
Dir: Jim Isler, Tom Isler
My first trip to Hot Docs had a wonderful start. After my brother cooked a tasty duck for dinner, we went with some friends to see Matchmaking Mayor. Matchmaking Mayor is a hilarious film about a small town in Slovakia called Zemplinske Hamre where the mayor (a former general) has decided that too many of his townsfolk are unmarried. To solve this problem, the mayor and his assistant plan a big party for all the singles in hope of creating some pairs. The mayor defends his choice to enter the private lives of his citizens by arguing that it is his duty as mayor to ensure the ongoing growth and survival of Zemplinske Hamre.


Matchmaking Mayor offers both the mayor’s perspective and that of the single townsfolk. What is fascinating about the film is how casually and frankly the dozens of unmarried subjects address their bachelorhood/spinsterhood: The interviews with the subjects reveal common anxieties and insecurities that prevent many of them from pursuing partners. Most interesting about the film is how widely the townspeople accept the idea that anyone over the age of thirty is simply “unmarriable”. Even the singles who have passed the age of thirty speak of their neighbours of the opposite sex as if they’re expired meat. It’s a bizarre scenario that none of the subjects justify clearly, yet they all consent to it. The odd philosophy of the singles of Zemplinske Hamre is one of the many quirks of Matchmaking Mayor. Overall, the film is a fun and offbeat observation on a tradition that the crotchety mayor can’t break no matter how hard he tries.
Matchmaking Mayor was preceded by a short film called Two’s a Crowd. The short documentary was well matched with the feature, as it tells the story of a New York couple named Allen and Collette who are finally moving in together after four years of marriage. Allen and Collette have been living in separate apartments during their marriage, much to the wonder of their peers. Two’s a Crowd offers an interesting flipside to Matchmaking Mayor and observes a more contemporary attitude of what constitutes a healthy relationship. Also noteworthy of Allen and Collette’s story is their testimony that they are moving in together purely out of economic means, and are quite horrified by the possibility that being together 24/7 will be the demise of their relationship. Allen and Collette were on-hand for a Q&A following the screening and they were proud to report that they are still together. They’re also just as funny in person as they are in the film!
Day 2
El Sicario: Room 164 ★★½
(Italy/France, 90 min.)
Dir: Gianfranco Rosi
The first feature I saw on the second day of Hot Docs was quite a disappointment. El Sicario: Room 164 offers the testimony of a Mexican hitman (aka el sicario) who tells the story of how he was recruited by a drug cartel during his high school years. El sicario describes everything about the training process of becoming a drug-runner, torturer, and interrogator – the cartels actually send recruits to train with the police and the armed forces – to the psychological torment that comes with the job. El sicario goes so far as to describe how to strip the skin off live “patients.”
Despite the chilling premise, though, El Sicario: Room 164 ironically falters in the execution of its subject’s story. The film is nothing more than a 90-minute lecture from the hitman. It could just as easily be a radio play due to the absence of any creative effort from the director to accentuate el sicario’s story on film. Considering the subject matter, the film is incredibly boring and there were a fair number of walkouts from the crowd.
Better This World ★★★★½
(USA/UK, 95 min.)
Dir: Katie Galloway and Kelly Duane de la Vega 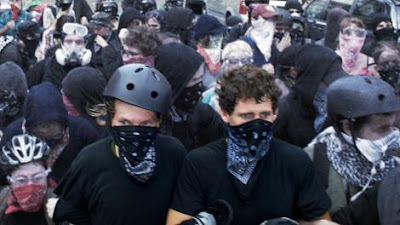 The second screening of the day was far more rewarding. Better This World is a powerful story about two young Americans named David and Brad whose desire for change meets with disastrous results at the 2008 Republican National Convention. David and Brad are both arrested during the protests and are subsequently charged with domestic terrorism when the authorities discover that they are in possession of Molotov cocktails. David and Brad’s case, however, takes an interesting turn when the film reveals that the activist who recruited them is actually an FBI informant.
Better This World uses the wildly problematic case against David and Brad to interrogate the destructive changes in America’s administration – and culture – in a post-9/11 world. Directors Katie Galloway and Kelly Duane de la Vega are very effective in deconstructing the violations in civil and democratic rights that result from efforts to crack-down on national security. The film succeeds because Galloway and Duane de la Vega refuse to void David and Brad of culpability; as a result, Better This World puts a greater level of guilt upon the American government.
The film is also superbly crafted. Using a mix of interviews, archive footage, and re-enactment, Better This World is both intellectually stimulating and emotionally compelling. (The footage of the protests against the Convention is particularly stunning.) The film also features several sequences in which the directors present recordings of telephone conversations between the boys and their parents, and these segments further convey both the absurdity of the case against the boys and the invasive paranoia of the American Government. While the politics of the film have the potential to polarize moviegoers, the passion and urgency with which the filmmakers convey the argument ensure that Better This World will be one of the most hotly discussed films of 2011.
Potiche ★★★
(France, 103 min)
Written and directed by Francois Ozon
Starring: Catherine Deneuve, Gérard Depardieu, Jérémie Renier, Fabrice Luchini. 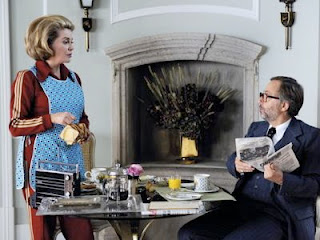 How funny is it that in the midst of enjoying a documentary festival, I find time to see a narrative feature? My brother won free tickets to a sneak-peek of Potiche, and one can never refuse free tickets. Potiche is a fun and quirky departure for French director Francois Ozon (Swimming Pool, Under the Sand). Catherine Deneuve stars as Suzanne Pujol, a trophy wife (aka une potiche) who upstages her chauvinistic husband when she takes over the family umbrella company. Under Suzanne’s direction, profits surge and employee morale reaches an all-time high. Potiche is an entertaining farce on the women’s movement in France circa the 1970s, and it’s worth seeing mostly for the spirited performance by Catherine Deneuve.
Day 3: 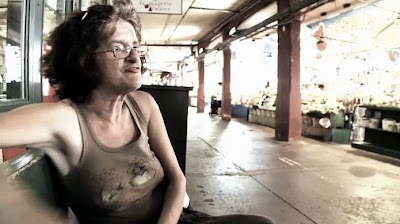 St-Henri, The 26th of August (A St-Henri, le 26 aout) ★★★★
(Canada, 85 min)
Dir: Shannon Walsh
Inspired by the 1962 documentary 'A St-Henri, le 5 septembre', Shannon Walsh returns to the Montreal borough of St-Henri to follow the lives of the townspeople for a single day. Using a team of filmmakers and cinematographers, Walsh chronicles the daily habits of a diverse group of Canadians. The “cast” includes some resonant and insightful subjects, especially Doris, who spends her days collecting bottles because it’s much better than sitting inside. The film also subtly captures relevant aspects of Canadiana, such as the increasing gap between the rich and the poor, as well as incidents of racism and discrimination that occur with such frequency that they seem dangerously casual. St-Henri, the 26th of August is a worthy entry into the National Film Board’s legacy of community-based filmmaking that is both entertaining and enlightening, and encourages fair representation of Canada’s diverse culture. I think that the programmer who introduced the screening described the film best by calling it “a worthy homage and addition to Canadian documentary.” I couldn’t agree more: I really liked this film!
Abendland ★★★
(Austria, 88 min)
Dir: Nikolaus Geyrhalter. 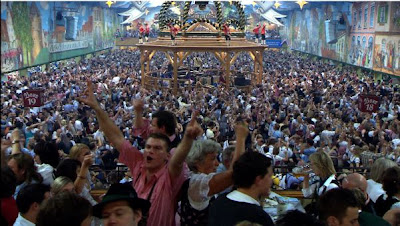 Abendland is an essay film that meditates upon Europe after dark. Director Nikolaus Geyrhalter strings together episodes of nocturnal activities in several European countries in order to evoke questions of both cultural difference and shared experience. Several of the scenes of quite intriguing, especially one that documents London’s crew of CCTV surveillance technicians, but the film as a whole is only marginally successful. The film might have been more evocative had it been told with greater visual or artistic flourish, or had it featured a more tangible link between the episodes. Nevertheless, it raises some interesting questions in a mildly effective manner.
Day 4: 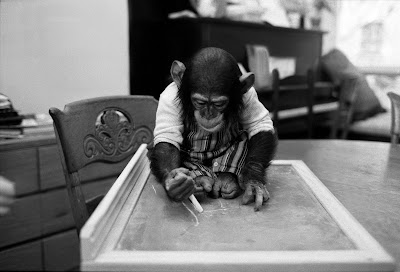 Project Nim ★★★★½
(UK, 93 min)
Dir: James Marsh
The prize for best of the fest goes to Project Nim, James Marsh’s worthy successor to his astonishing Oscar-winner Man on Wire. Like Man on Wire, Project Nim mostly employs the talking heads format of documentary in order to give multiple perspectives on the same event. Marsh complements the testimony of his subjects with a blend of archival footage and dramatic re-enactment. In this case, the film documents the 1970’s study in which a group of scientist taught sign language to a chimpanzee. The film provides competing viewpoints and methodologies on how best to raise Nim during the study, so the film offers intriguing debates on the tensions of nature versus nurture, science versus art, and humans versus animals. Marsh also crafts the film in a way that allows the viewer to decipher and contemplate the issues at hand, rather than offer a heavy-handed simplification of such dense issues. Project Nim is one of the most surprising documentaries I’ve ever seen: The story of this great little chimp is both moving and profound.

The Future is Now! ★
(Canada, 92 min.)
Dir: Gary Burns and Jim Brown.
The Future is Now! pits the Man of Today with The Woman of Tomorrow in a mix of drama and documentary that aims to expand our minds in order to serve our planet best. The film takes an approach similar to What the Bleep Do We Know, but falls far short of the existential wonder of its predecessor. Instead, The Future is Now! is an annoying tirade of ivory-tower intellectualism, and Burns and Brown present a series of stock figures that ask banal questions and cry “bullshit!” To put it mildly, I HATED this movie. I’ll give it credit, though: It managed to open up my mind…only because I lost so many brain cells in the process of watching it.
It’s too bad that my first Hot Docs experience ended on a bit of a low note (my last day also included standing in the rush line for Pirate Tapes for almost an hour and not even getting a ticket). Nevertheless, I think that my whirlwind adventure with these hot docs taught me more about documentary film than did thirteen weeks of FILM 5601. Hot docs also revved up my festival fever, which might include a visit to the World Wide Short Film Festival in June before heading back to Toronto in September for TIFF!