Sisterhood of the Side-Splitting Gags

A riotous bitch slap in the face of fluffy pink Chick Flicks, Bridesmaids is one fun night at the movies! In fact, one scene of Bridesmaids is so funny that a woman sitting near me in the theatre actually so hard she farted. (They must have heard that in the back row!) Bridesmaids is coarse, but it's also cuddly, and it strongly blends ribald physical humour with rom-com sweetness. The script by Kristen Wiig and Annie Mumolo balances the two modes of comedy quite well, so Bridesmaids succeeds in its execution of crossover comedy. It’s fearlessly bawdy, without straying too far into vulgarity… and this is a film that features diarrhoea in a sink. 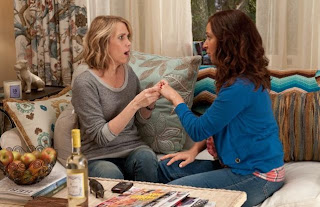 Bridesmaids stars Kristen Wiig as Annie, a hapless thirty-something who seems headed for rock bottom. She lives with two loutish and borderline incestuous siblings (only one of whom pays rent). Equally disastrous is her love life, which consists of some late night love sessions with Tom (Jon Hamm), a sexy but arrogant chauvinist whose ‘no strings attached’ attitude leaves Annie feeling like a cheap hooker. Finally, Annie spends her day putting on a phony smile and selling engagement rings to happy couples. It seems that Annie is always a bridesmaid, but never a bride. This time, though, the wedding stings a little more because the bride to be is Annie’s childhood BFF Lillian, played by Maya Rudolph (who is finally free of the baby that has been gestating since A Prairie Home Companion and Away We Go). Annie agrees to be the maid of honour for Lillian’s wedding, but while she tries her best to be happy for her girlfriend, Annie cannot help but put into perspective how little she has accomplished with her life.

Lillian quickly introduces Annie to the rest of the wedding party, and the other bridesmaids give Annie competing perspectives on her own lifestyle. Some seem better by comparison, while others suggest that married life isn’t all it’s made out to be. Annie’s biggest foe, however, arrives when Lillian introduces her to Helen (Rose Byrne), the comically perfect embodiment of a successful and desirable woman (a.k.a. the opposite of Annie). As the party progresses, Annie becomes aware of just how close Lillian and Helen have become during their eight months of friendship. Not willing to be upstaged, Annie makes a pre-wedding speech that would make even George Costanza cringe.

The rivalry between Annie and Helen fuels much of the narrative of Bridesmaids as the two women compete to deliver a perfect wedding for Lillian. Much of the comedic success of Bridesmaids occurs through the difference in comedic styles of Wiig and Byrne: Annie is painfully awkward and the character affords Wiig plenty of situational and physical humour at which her talents excel. Byrne receives a more graceful character and she delivers much droll sarcasm and deadpan humour. All of the actresses in Bridesmaids, however, have perfect timing and synergy, and they make for a rambunctious sisterhood of comedic frenzy. Melissa McCarthy is especially funny as the boorish Megan.

The wedding party gets into all sorts of wild debauchery that one might expect in a movie like Animal House instead of My Best Friend’s Wedding. It might seem like a Chick Flick, but Bridesmaids has more jokes on balls, boobs, and bodily functions than most movies directed at meathead male audiences. Unlike many of those movies, though, Bridesmaids is actually funny. Director Paul Feig knows when to hold back and when to go all in, so Bridesmaids delivers plenty of raunchy humour without being vulgar or gratuitous. Bridesmaids works so well because it alternates between screwball and sophisticated comedy by using a mature storyline in which Annie falls for a charming and sensitive police officer named Rhodes, played by Chris O’Dowd.

Annie’s relationship with Chris allows the film to develop Annie’s character without being contrived or sappy. Moreover, the shift in tone that accompanies the romantic subplot gives audiences a few moments to recover from the bridesmaids’ tomfoolery. It also makes the subsequent scenes even funnier because the high energy of the bridesmaids contrasts with the subdued scenes between Annie and Rhodes.

Bridesmaids is therefore a smart and well-balanced comedy that should appeal any moviegoers open to some rowdy fun. Who thinks we need a sequel to this perfect marriage of raunch’ and rom-com? I do.