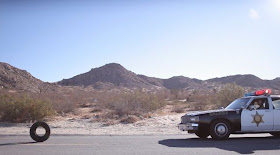 Did you ever What’s up, Tiger Lily? that 1966 Woody Allen movie? In Tiger Lily, Allen takes a B-level Japanese action movie and re-dubs it with American voices and cheesy dialogue. It’s one really good joke that sustains itself surprisingly well for an 80-minute runtime. Much like Allen’s film, Rubber tries to stretch a great premise across a feature length film. Rubber is not nearly as successful as What’s up, Tiger Lily? but it makes a good try at it nonetheless.
Rubber is an absurd send-off to the horror genre. This time, the menacing killer is Robert, a self-aware tire that preys upon small animals and quickly learns to kill humans by using his awesome telekinetic power. Right… 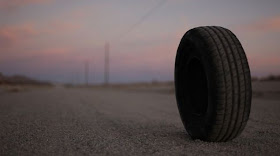 As Robert rolls about the desert and learns how to self-propel around the sand dunes, spy on naked chicks, and eventually kill people, Rubber is hilarious if only for the stupidity of the situation. Adding to the mock-slasher kitsch is the Sheriff (Stephen Spinella), who pursues Robert with droll incompetence, but also with a philosophical inquisitiveness ripped from an adaptation of a Cormac McCarthy novel. There’s also an in-movie audience that comments on the action from time to time (and squabbles about the inappropriateness of talking during a movie), and they provide some-much appreciated filler to the thin narrative. 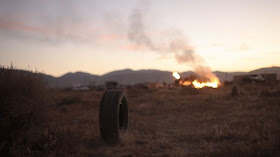 Robert’s killing spree isn’t a bad one – in fact, it’s better than most stalker movies. Rubber, however, might have worked best as a short or a YouTube parody, as the film starts running out of gas around the forty-minute mark. (Alternatively, the tire runs air.) Case in point for Rubber’s over-length is the greatness of the trailer compared to the feature. Moviegoers can get the gist of it from just two minutes, and they’ll probably enjoy it just as much, since the trailer features all of the film’s best moments; however, they will miss the funky electro-pop score by Mr. Oizo and Gaspar Augé, as well as some amusing sight gags.
At the very least, Rubber succeeds as a tribute to B-level schlock films, and it will surely make a worthy addition to video-store bargain bins in the years to come. Art-house auds might also enjoy the rare opportunity to see a co-produced Angolan film, although after seeing Rubber they’ll all agree that film might not be that nation’s greatest strength. The film won’t appeal to all discerning tastes, but for anyone who enjoys a monthly screening of The Room, this one’s for you.
Pat Mullen at 5/28/2011 02:51:00 PM
‹
›
Home
View web version