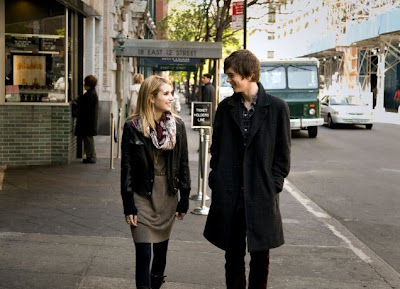 "High school, those are your prime suffering years. You don't get better suffering than that."
-Uncle Frank (Steve Carell), Little Miss Sunshine

The Art of Getting By is a teen comedy so riddled with self-loathing know-it-alls that it makes me wish I could resurrect the body of John Hughes just so I could punch him in the face. The film obviously draws much inspiration from the offbeat comedies of the eighties and nineties that inspired young people everywhere to stand up and proclaim, “I am a unique and original person!” This feature debut by writer/director Gavin Wiesen, however, forgoes all the feel-good funniness of the Hughes films and instead aligns itself within the exclusive cinematic canon of films like Gigli, The Next Best Thing and, most appropriately, Kazaam due to the unspeakable badness of its male star. 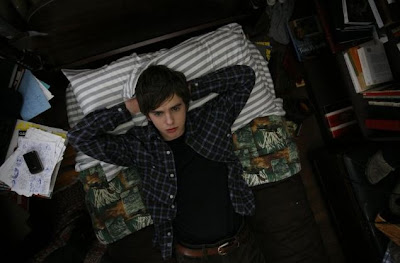 As George, Freddie Highmore gets his first major lead role after appearing with Johnny Depp in Finding Neverland and Charlie and the Chocolate Factory. It’s probably his last one, too. It doesn’t help Highmore that the character written by Wiesen happens to be the most unlikable jackass to grace the screen in quite a while. George is a lost and found box of teen movie clichés: he’s in his senior year of high school, but he’s indifferent to the looming graduation date because high school is merely another systematic way of squashing his individuality. George earns himself more brooding rights because his parents are middle-class New Yorkers who discuss book reviews at dinner and seem oblivious to his every need. George finds solace, however, in doodling portraits of famous artists in his workbooks and by listening to Leonard Cohen’s “Winter Lady” on repeat. He also spouts enough angst on the world’s ills to give Alvy Singer an ulcer; finally, George does all this while frumping about in a big tweed overcoat, which he wears even when indoors. “I like to wear layers,” George says in his defense. (Oooooh, symbolic!) Thankfully, Wiesen at least avoids using an onion as a metaphor for George’s complexity. It’s too bad he doesn’t, as that would have provided a cheap opportunity to observe how much the film reeks.
As George continually proves himself an arrogant windbag in increasingly lamentable scenes, Highmore keeps digger his grave deeper and deeper by being so woodenly obnoxious – Madonna would add more life to the film! Highmore is so monotonous, so flat, and so boring that he could be the spawn of Madge and Robert Pattinson. The Art of Getting By is one of those cringe-inducing films that not only subjects the audience to lousy material, but also requires them to hear it delivered badly. 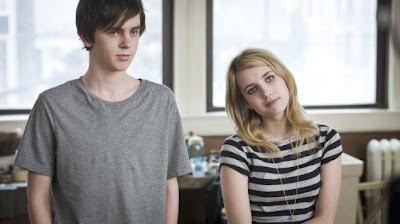 Emma Roberts fares slightly better as George’s love interest Sally. She certainly displays enough charm and acting chops to move on to better projects, although Wiesen’s script and inept direction hardly give her much to work with. In fairness, though, one doubts that even her aunt Julia could bring this disaster into two-star territory.

The only characters more poorly crafted than George are the adults in The Art of Getting By. Wiesen moulds each parent into an inept ignoramus who passively accepts his or her child’s smart-aleck demeanour. (The Art of Getting By, then, might best succeed as an inadvertent public service announcement for a woman’s right to choose.) These doormats to George and Sally constantly enable their bad behaviour through their own inability to grow up, but Wiesen seems more content to squeeze cheap laughs from parental buffoonery than to try to make any strong or compelling relationships. Moreover, Wiesen tries to position his kiddies as enlightened young adults by setting their romance within trendy nightclubs, posh restaurants, and dank pubs: either Wiesen was too lazy to research the legal drinking age or New York has the most lenient alcohol servers in America.
Despite the shoddiness of the characters and Highmore’s performance, the biggest offense of The Art of Getting By is the clunky dialogue alluded to in previous criticisms. Wiesen crams the mouths of his abhorrent teens with dialogue so unbelievably contrived that it robs the film of any remaining pretence of realism or credibility. George pontificates in sentences so long and grandiose they could make Henry James blush; his sermons owe a heavy debt to Ferris Bueller. Wiesen’s script rings so false that one longs for the digestible ‘fo-shizzle my nizzle’-isms of Diablo Cody’s Juno. Too bad for Wiesen that this is one doodle that can’t be undid, homeskillet.
A prime contender for the worst film of 2011, The Art of Getting By is a tragic attempt to enter the legacy of films that so obviously inspired it. The saddest part of the film is that its writer/director plainly missed the point of all those winning comedies. Whereas the earlier films provided a story through which angst-ridden teens could celebrate their individuality in a conformer’s world, The Art of Getting By simply instructs its viewers to treat their peers like dirt and then capitalize on their flaccid goodwill. By the time the whiny misfits of the film get their comeuppances, one wishes they could simply have gone the way the Ferrari in Ferris Bueller’s Day Off.
Posted by Pat Mullen at 6/21/2011 01:56:00 PM