Send Me to Detention! 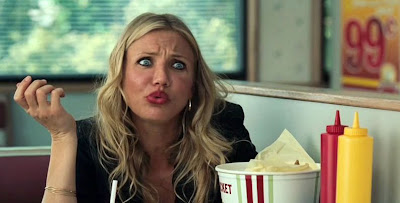 Cameron Diaz earns herself a gold star for Bad Teacher, but some of the off-screen talent from the film might have fared better had they done their homework in film school. As Elizabeth Halsey, the naughty, hard-drinkin’, crack-smokin’, foul-mouthed schoolteacher, Diaz gives one of her funniest performances in quite some time. (It’s nice to see Cameron Diaz back in top form after a string of supporting roles in misfires like Knight and Day and The Green Hornet.) Bad Teacher might not be There’s Something About Mary, but like the raunchy 1998 hit, Diaz makes the film far better than it should have been. 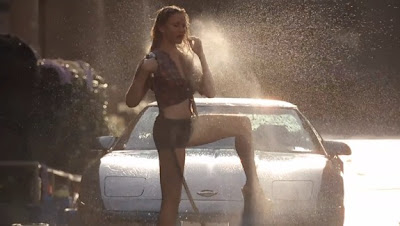 Much to her chagrin, Elizabeth begins another year in the classroom when her meal-ticket fiancé catches on to her gold-digging ways and gives her the boot. Completely uninspired to be a working woman, Elizabeth realizes that she’ll never find the right man to save her from the blackboard unless her assets are plain to see. The solution, Elizabeth decides, is to get a boob-job. It’s hardly something she can afford on a measly teacher’s salary, but by becoming more involved in the school community (re: fundraisers), Liz can skim a few bucks to add to her “new tit fund.” 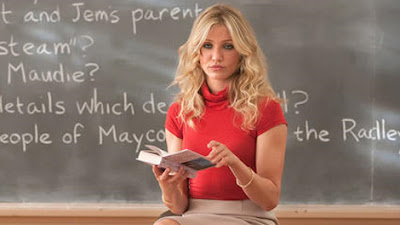 Elizabeth’s classroom antics catch the eye of fellow teacher Miss Squirrel (Lucy Punch), a perky keener who refuses to let Miss Halsey be the bad apple that spoils the whole bunch at John Adams Middle School. Not only does Miss Squirrel become Elizabeth’s faculty foe, but she also becomes her top competitor for the new dorky but hot math teacher Mr. Delacort (Justin Timberlake). Attractive, friendly, and most importantly, rich, Scott Delacort looks like Elizabeth’s ticket outta there: freedom is only two new boobs away. In addition, when Liz’s gawky co-worker, Lynn (Phyllis Smith), reminds her that the upcoming state test offers a $5700 reward to the teacher whose class scores the highest, Liz finally gets the incentive to teach like Michelle Pfeiffer in Dangerous Minds. 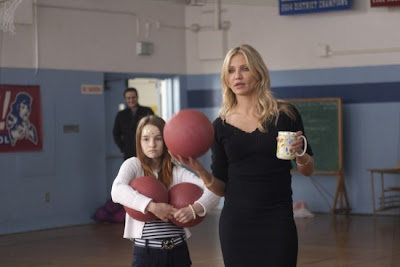 Elizabeth’s sassy antics are hilariously un-p.c., and for anyone who has ever stood in front of a classroom, she is truly an inspiration. It seems what these kids really need is a teacher who is unafraid to give them an “F”. Diaz clearly has a lot of fun in the role and her saucy bark gives Bad Teacher the bite it desperately needs. At times, the script by Gene Stupnitsky and Lee Eisenberg (“The Office”) excels when pitting the characters in tricky situations and outrageous unteacherly conduct; however, Bad Teacher blunders when it strives for raunchy belly laughs. The filmmakers are more hesitant with the naughty bits than they are with the situational comedy, and Bad Teacher might have worked better had Kasdan pushed the material more into hard-R territory or simply scrapped some scenes altogether (the dry-humping scene, for example). Bad Teacher has enough edgy and risqué humour to gear it towards a mature audience, anyways, and satisfy them in the process. Bad Teacher almost resembles a first lesson in driving a standard transmission: it starts smoothly, but then becomes too self-conscious and starts to chug a little when switching gears. It then comes to a grinding halt and stalls a bit before starting up again and coasting to a decent finish. 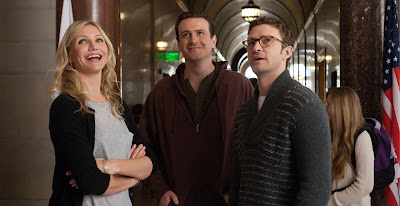 Diaz gets some help from her co-stars in steering the film in the right direction. Justin Timberlake trades his brash arrogance from The Social Network and bravely acts like a complete dweeb with much success. Ditto the wonderfully awkward Phyllis Smith, who gets some of the film’s best lines and moments as Lynn. Jason Segel also adds some fun as Elizabeth’s persistent co-worker, while Lucy Punch (You Will Meet a Tall Dark Stranger) expands her comedic repertoire and provides a worthy foil to Diaz’s badass Miss Halsey. Like Diaz, the supporting cast lifts Bad Teacher to a higher grade level.
While it certainly won’t make the honour roll of high school comedies, Bad Teacher certainly avoids the dunce list. With Cameron Diaz headlining as one of the funniest (and hottest) big screen tutors, Bad Teacher is a fun, well-timed kick-off to the summer holidays. “No more classes, no more books, no more teachers’ dirty looks!”
Bad Teacher is currently playing in wide release.
Posted by Pat Mullen at 6/26/2011 06:36:00 PM