Captain America: The First Avenger is a great slice of American cheese. Not only is this visual effects extravaganza a solid product of artificial processing, but also it has enough clichés and familiarities to fill the first half of Super 8. While Super 8 does not fare as well, Captain America proves that sometimes American cheese is a good thing. Just like a greasy grilled cheese sandwich, Captain America has little nutritional value. Take some mayo and stick a slice of cheese between two slices of white bread (or Hayley Atwell and Natalie Dormer in this case) and for those of you who like to slather some butter on your fatty sandwich, Captain America comes with the option of additional calories in the form of unnecessary post-production 3-D. A good sandwich indeed. 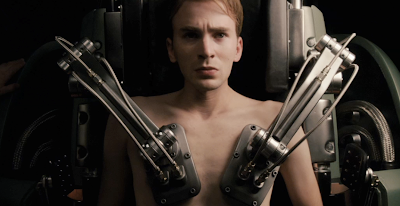 Pardon the underlying cynicism in the introduction, but the closest we have had to a big screen national superhero lately is The Mountie. (Facepalm) Starring as the superhero in red, white, and blue is Chris Evans (aka Johnny Storm in Fantastic Four). Like the other entries in the onslaught of comic book films, however, The First Avenger must unfurl the origins of Captain America before the actions begins. The film introduces the Cap’s pre-super counterpart, Steve Rogers, a scrawny pipsqueak who dreams of aiding Uncle Sam in the fight against Hitler. Evans plays Steve thanks to some snazzy effects à la Benjamin Button; however, the result is not quite as effective as it was in altering the age of Brad Pitt, for the anorexic rendering of Evans’s body is surprisingly distracting. 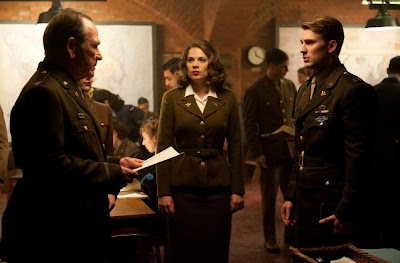 Despite his physical liabilities, Steve’s heart and determination catch the eye of Dr. Erskine (Stanley Tucci). Dr. Erskine is in the midst of developing a secret project and Steve seems like the ideal recruit. He then sends Steve off to boot camp, where the little guy receives mixed reviews from his superiors. Peggy Carter (the strong and sultry Atwell) sees Steve as strong-minded, but Col. Philips simply sees an accident waiting to happen. Playing Col. Philips is Tommy Lee Jones, who is every bit as delightful in the role of the ornery colonel as he was playing the fast-talking US Marshal or the world-weary Sheriff. Fortunately, for Steve, Dr. Erskine agrees with Peggy.
This leads to Dr. Erskine’s secret project, which seeks to build an army of super-soldiers using a special formula. After submitting to a procedure reminiscent of that of Dr. Frankenstein, Steve emerges as a huge, bicep-rippled human machine. (Sadly, the secret tonic does not make Evans’ performance more robust.) Hence, Captain America is born. 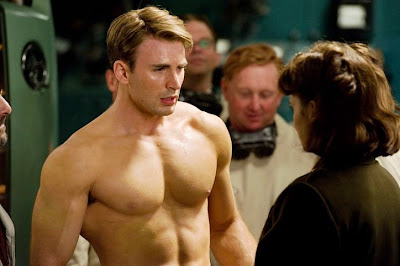 Captain America features just the right amount of exposition to do the film justice. I say this in complete ignorance of the source material, but the film details the creation of the superhero at the right pace and it offers enough particulars to inform adequately any moviegoers not already introduced to the Captain. The film also crosscuts with scenes that highlight the treachery of Captain America’s nemesis, The Red Skull (Hugo Weaving). 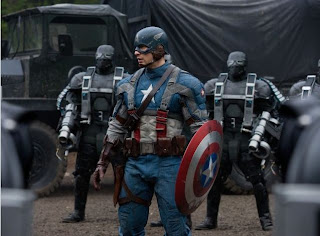 The misfortune of Captain America is that despite the brisk and engaging introductory portion of the film, the latter half, which features the Superhero in all his crime fighting glory, is surprisingly disappointing. Besides the first sequence in which the hero discovers the wonder of his new powers, the action in the film leaves much to be desired. Instead of offering thrilling fight scenes and elaborate action sequences, director Joe Johnston opts for breezy montage sequences that gloss over much of the energy of the film and fail to excite or engage. Moreover, these montages all seem like a gratuitous excuse for tricky special effects, as they have no effect on the narrative. Earlier efforts like Iron Man or even the recent X-Men: First Class proved that even one extended action sequence could be highly entertaining if it was grounded in the narrative and the plight of the characters. In this regard, Captain America fails to capture the fact that comic books can be much more than visual fancy.
While it does not stand out amongst the heavy field of super hero movies, Captain America: The First Avenger is still in a league above The Green Hornet or Scott Pilgrim vs. the World. Like the aforementioned grilled cheese sandwich, Captain America has little meat to it, but it offers a pleasant, youthful escape. It’s best enjoyed with a nice cup of Freedom Fries.
Captain America: The First Avenger is now playing in wide release.
Posted by Pat Mullen at 7/22/2011 03:33:00 PM