Rise of the Planet of the Apes treads the familiar story of a noble scientist, Dr. Will Rodman (played by James Franco), who seeks a cure for Alzheimer’s by testing a new drug, ALZ-112, on some apes. One ape shows particular promise in cognitive advancement, so it seems that Will is finally closer to achieving his goal. It’s a personal one too, since his father (John Lithgow) suffers from the disease; however, the prized ape goes bananas during Will’s pivotal sales pitch, thus causing the rigid pharmaceutical tycoon (David Oyelowo) to kill the project. When the lab techs are forced to dispose of the apes, Will receives a surprise: the aforementioned ape was merely being aggressive because she was protecting a baby. Seeing potential in the eyes of this young primate, Will takes it home.

The young ape, which Will’s father quickly names Caesar in a bout of Shakespearean excitement, demonstrates his mother’s heightened skills. Will continues his research in secret and soon tests the drug on his father. As Will’s father improves throughout the course of the study, so do Caesar’s intellectual and interpersonal skills. In a nod to Nim Chimpsky, Caesar quickly learns sign language while dressed in a red sweater.
Much like Nim does in Project Nim, Caesar shows aggression in his later years. Playing the mature Caesar is Andy Serkis (aka Gollum and King Kong), who soon is thrown back into the world of the apes when he can no longer supress his strength. As one already knows going into the film, Caesar leads an uprising of his fellow apes. 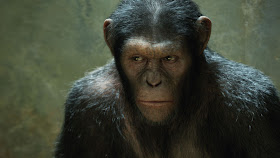 While Caesar certainly has the fluid and nimble movements of a real human, there is something unmistakably artificial about him. Caesar has a unique waxy sheen to his surface and an odd soft glow that consistently reminds one that he is digitally rendered. (As do all the other primates in the film.) Put another way, the difference between the humans and the animals in Rise of the Planet of the Apes is much like the contrast between the real life Julie Andrews and the animated penguins in Mary Poppins. While they are an impressive feat of animation and visual effects, these apes are almost a step back from the astonishing apes made by make-up wizard Rick Baker in Tim Burton’s otherwise lackluster 2001 entry in the Apes franchise. Sure, each hair on the apes’ bodies bristles individually and the apes have an excess of detail and texture to their surface, but they ultimately remain as unquestionably fake as the proverbial man in the monkey suit. The only difference is that the monkey suit is now a fine layer of high-tech fabric and innovative motion-capture sensors, which is dressed up with an outer layer of pixels.
Moreover, Serkis’s performance as Caesar regularly draws attention to the artifice of the film. Admittedly, Serkis’s great ability to scratch and caw, as well as generate some human pathos to the character, might lead one cry “hail to the chimp”; however, one must reconcile this with the fact that it’s difficult to determine where Serkis’s performance ends and the visual effects begin. How much of the surface effects of this performance belong to the digital domain, especially Caesar’s expressive eyes? Additionally, although Serkis gives an impressive physical performance, Caesar is not as laudable an effort in motion capture performance as, say, Brad Pitt’s turn in The Curious Case of Benjamin Button, or even Serkis’s own tour-de-force as Gollum in The Lord of the Rings films. In fact, Caesar is much like a small-scale repeat of Kong in King Kong. Yes, it is a technical marvel, but the effect has no significant advancement beyond 2005’s Kong to convince this reviewer that motion capture technology is the reason to see Rise of the Planet of the Apes. 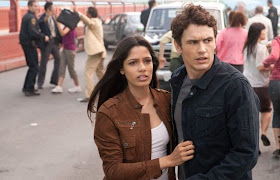 One’s mixed reception of the special effects is not helped by the fact that many other elements of the film are lacking in effort and in execution. The script by Rick Jaffa and Amanda Silver is ridden with plot holes, overwrought dialogue, and a heavy-handed unfurling of its dramatic action. Rise is filled with cardboard characters and eye-rolling action. This ape-grade script receives further disservice from a surprisingly sleepy James Franco; however Franco fares better than his onscreen romantic interest Freida Pinto, who offers yet another of her characteristically wooden, insipid, and lifeless performances. Perhaps if producers next use Andy Serkis to animate Pinto’s body, they will finally achieve the full potential of motion capture technology.
One cannot deny, however, many strong contributions to Rise. Cinematography Andrew Lesnie (The Lord of the Rings trilogy) does an excellent job of capturing the action with some splendid lensing and fluid camera movement. Composer Patrick Doyle (Gosford Park) delivers a brilliant that frequently propels the action of the film with a strong jungle rhythm. Finally, flaws in the perceptual reality of the visual effects notwithstanding, the technical wizards deserve some praise. It simply happens that unlike other equally sub-par blockbusters, Rise of the Planet of the Apes lacks the extra wow! factor to merit seeing the film for the effects alone.