(Canada, 91 min.)
Dir. Jaret Belliveau, Craig Jackson.
The documentary Highway Gospel is a fun look at the culture of extreme skateboarding in Canada. The film offers two storylines that capture the passion of the sport. One follows Bricin, the raucous skater who began the World Championship of longboarding in small town BC. The film also introduces Jody, a member of BC’s skating community, as he earns a living by making his own boards and drinking beer. Together, these guys are like the real life Trailer Park Boys - it's nonstop buffoonery with two! The second narrative chronicles the life of Ottawa skater Claude Regnier (pictured above), a lifelong devotee to skating. Claude is a world champion skater and the film offers some neat archival footage of his races in the eighties; however, the more compelling aspect of Claude’s story is his present day effort to run a skate park and continue his passion for the sport by sharing it with local youths.
Highway Gospel blends the two stories quite well: the BC story provides riotous fun by showing us glimpses of extreme racing and drunken disorderly conduct, while the Ottawa-based story offers a more emotional and personable portrait. Both stories, however, play off one another to convey the men’s love of the sport and their notable efforts to prove that skating can be much more than boisterous hobby. The film also conveys the thrill of the sport by including some amazing footage of the downhill races. Overall, Highway Gospel offers a unique and highly entertaining snapshot into the lives of a few Canadians willing to risk it all for their way of life. 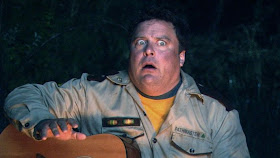 Highway Gospel was introduced by the equally funny short The Legend of Beaver Dam. Beaver Dam is a true oddity – a story of a group of young campers whose night of songs around the campfire turns into a full-on gore fest. Director Jerome Sable handles it all quite well though, so Beaver Dam is truly unique and memorable for its irreverent fun.
The second bill of the night featured another short, Beauty Marks. Beauty Marks is an experimental look at the risks of cosmetic surgery and the perils of conforming for the sake of body image. It’s an odd but artful essay that encourages much reflection.
The second feature, however … 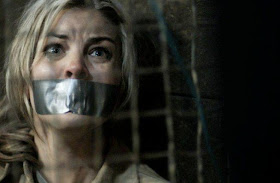 Kennyville ★
(Canada, 83 min.)
Dir. Brooks Hunter; Writ. Brooks Hunter, Geoff Heintzman, Vincent Galvez
Starring: I’ll do the cast a favour by withholding their names.
Kennyville is an insufferable combination of the ‘woman in peril’ scenario crossed with the clichéd story of a rural town that is run by psychotic/bloodthirsty hillbillies. The uniformly flat cast drains all of the potential B-movie comedic value from the laughably bad script, which took three people to write! At the risk of saying anything else unkind, I'll express my thoughts on the film via this clip of Elaine watching The English Patient:
Pat Mullen at 8/20/2011 05:54:00 PM
‹
›
Home
View web version