*I must apologize to the filmmakers who had films playing in the 12 o’clock spot reserved for local shorts. I tried to make it to the screening, but I was delayed by the construction chaos on the 417 near Carling. Sorry to have missed them – I’m sure they were good!

The first feature of the day, The Righteous Tithe, is an adaptation of the local stage production of the same name. Although The Righteous Tithe is extremely talky and the action occurs almost entirely within interior settings, the film eludes the ‘stage-bound’ dynamic that befalls many stage-to-screen efforts. In fact, the sense of enclosure in the film adds to the atmosphere of the production since the film examines the invasiveness of American policy in a post-9/11 world.

While en route to their annual vacation at their timeshare in Virginia Beach, Cyrese and David Simpson (played by Rachelle Casseus and Doug Phillips) find themselves unexpectedly detained at the US border. The border officer (Matthew Stefius) explains that because David is not a Canadian citizen (he’s a Brit), he must be photographed, fingerprinted, and processed before the couple can continue on their trip. After three hours, the Simpsons’ wait becomes an investigation, as David is taken to an interrogation room and questioned by a brash FBI agent named Sam Goldstein (Sean Tucker).

What ensues is mostly a two-man tangle within the confines of the interrogation. The sense of intrusion is effectively enhanced by some tight framing, as well as the occasional cross-cut to Cyrese as she waits, completely in the dark of their situation. As the Simpsons slowly succumb to the despair of their predicament, their vacation disaster evolves into a sharp critique of American policy in the age of the PATRIOT Act. In a way, The Righteous Tithe follows a similar theme as Tom McCarthy’s The Visitor, which savagely examines the irony of such a policy coming from a nation founded upon immigration. Despite offering perspectives from different sides of the border, both films arrive at a similar conclusion, and therefore make striking companion pieces.

The production of The Righteous Tithe is, admittedly, a rougher production. There are some awkward cuts and the audio could be cleaner. Additionally, the soundtrack borrows themes from Clint Mansell’s score for Requiem for a Dream and from Thomas Newman’s work for Road to Perdition: the scoring is partially effective, although the familiarity of these great scores is rather incongruous with the subject matter and therefore provides a slight distraction. The political commentary is also heavy at times, but the film remedies that somewhat by offering a final scene that provides a nice backstory to Agent Goldstein’s vendetta (a new addition from the play). The film is mostly worth seeing for its terrific ensemble cast, all of whom work together to make The Righteous Tithe a riveting political drama. 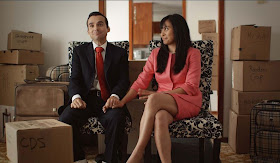 The only comedic feature of the festival, Running Mates, is a nice surprise. The film is about two life-long friends (Thomas Michael and Paolo Mancini) who become bitter rivals during the mayoral election of their small town. The film chronicles the efforts and excitement of the townspeople in mockumentary form, and Running Mates does for small town politics what Waiting for Guffman did for community theatre!

When big city boy Archie Fenton (Michael) wheels into town with a slick haircut and a hot, exotic wife, Ronnie, (McLean), who is also the face/heiress of a lucrative soy sauce empire, he is determined to reclaim the town by becoming its new mayor. Armed with a legion of buzz lines and a fanatical wealth of guidance from Ronnie – she’s read virtually every political biography on the shelves (even Hitler’s) – Archie seems the ideal blend of Obama-era charisma and Jack Layton sincerity. He has even mastered the perfect closed-fist/thumb-on-top gesture that makes the leaders so compelling. He seems like a shoo-in. That is, until he encounters his old high school buddy Reg Rossi (Mancini). 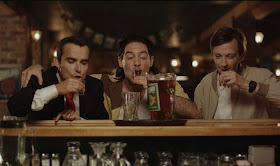 Unlike Archie, Reg never left the small town of Shoulder. Hence, he is far less refined: he’s a “business at the front, party at the back” kind of guy, and he could drink the guys from Highway Gospel under the table. He also remembers his friend from the good old days when Archie was known as “Skid marks” Fenton. As Ronnie quickly observes, Reg is exactly the kind of thing that could derail a successful campaign.

Rebuffed by his friend, Reg starts a campaign of his own. What ensues is a feud of mud slinging so vindictive it that Stephen Harper seems modest by comparison. Unlike our PM, though, Running Mates is never mean spirited. (Archie always remembers the importance of a cuddly kitten). It’s consistently funny and it offers a sharp satire on contemporary politics. It also has enough crude humour to make Bill Clinton blush.

At the heart of Running Mates is the small town of Shoulder. The community spoofs are among the highlights of the film. The backstory of the Great Pig Fire, told by the former mayor (Henry Winkler) is particularly good, as is the sequence of the annual pig hunt. One can almost hear Sarah Palin chanting, “Gut the pig!” along with the townsfolk.

Running Mates is fun and refreshing, and the accessibility of Shoulder’s good graces suggests that a wide audience should enjoy the film. The cast seems to be having a lot fun with the material and the production is as well assembled as Archie’s suit, although like Reg’s haircut, it’s a bit too long at the back end. Overall, though, Running Mates gets my vote!

***This concludes the second annual Ottawa International Film Festival. I was quite impressed by the line-up of films this year, and the festival organizers should be congratulated for how much the festival has grown within just two years. A big thanks to all the staff and volunteers too! I look forward to next year’s fest!