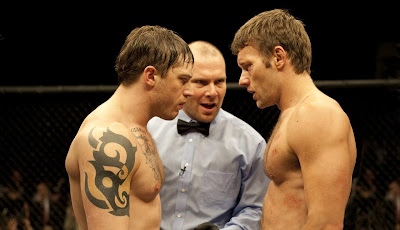 Proving that the formula for the underdog movie still has enough steam for a second round, Warrior could easily take on last year’s champ, The Fighter. While The Fighter was the story of two brothers – one a boxer, the other an exasperating loudmouth – Warrior throws both brothers into the ring. For Tommy and Brandon Conlon, played by Tom Hardy and Joel Edgerton, respectively, the fight in the climactic mixed-martial arts tourney is the last shot at survival and redemption. 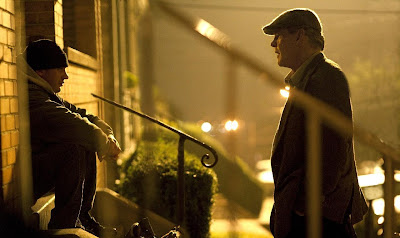 Warrior follows each of the Conlon brothers as they warm up for the fight. Tommy shows up unexpectedly one day at his father’s home in Pittsburgh: it’s been years since he and his father, Paddy (Nick Nolte), have seen one another. Paddy was a drunk during the boys’ childhood and Tommy escaped with his mother so that Paddy could no longer use her as a punching bag. The reunion between the two is tense and awkward – there is little warmth from Tommy’s side, despite Paddy’s sober plea for forgiveness. 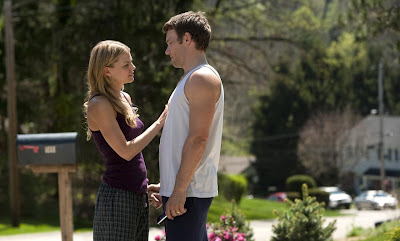 Paddy’s relationship with Brandon is equally troubled. Brandon, however, is less concerned with reconciliation and more focused on protecting his new family. He and his wife, Tess (Jennifer Morrison), are about to lose their home if they cannot come up with a mortgage payment in ninety days. In a desperate bid to keep a home for his wife and daughters, Brandon enters a fight at the local strip club. He wins the battle, but it also costs him a suspension from his job at the local high school.
Both brothers soon turn their interests to mixed-martial arts, which leads them to enter the MMA tournament. Unaware that the other is a fighter, each one emerges as a sort of underdog in the competition. Tommy especially becomes a fan favourite when a YouTube video appears that depicts him saving a Marine unit in Afghanistan. 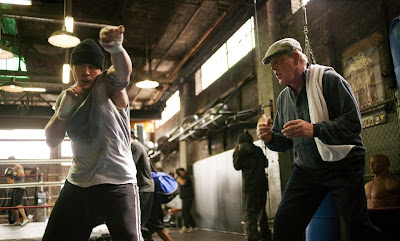 As Tommy and Brandon both prepare for the fight, Warrior follows the familiar trajectory of sports movie redemption. Warrior tells the old story well though, and the film has a unique dynamic that makes it consistently difficult to choose which one of the Conlon brothers to root for. As the film reveals, Brandon abandoned Tommy and their mother to start a family with Tess; however, Brandon’s own family will be homeless if Tommy wins the fight, so it’s hard not to invest in Brandon. On the other hand, Tommy’s troubled relationship with Paddy suggests that his fight is a more of a personal battle, like a symbolic win over his father and brother. When it comes time for Warrior to deliver the final punch, one can’t help but watch with a sense of uncertainty.
Warrior bears much resemblance to last year’s The Fighter, but it should not suffer in comparison. Warrior is a good movie in its own right. The family dynamics of Warrior are a little cleaner than those of The Fighter are, and Warrior certainly has a tad more sports movie schmaltz than The Fighter, yet it’s consistently engaging and frequently surprising. The film also touts a trio of great performances by Hardy, Edgerton, and especially Nolte. Equally impressive is the phenomenal editing job by the team of Sean Albertson, Matt Chesse, John Gilroy, and Aaron Marshall: the cutting of the film has an excellent one-two rhythm and the editors splice the fight scenes carefully so that the blows are not too brutal for audiences to watch, yet they retain their impact on a gut carefully level. Aided by some star fighters and an expert cut-team, Warrior is a thoroughly entertaining prizefight.