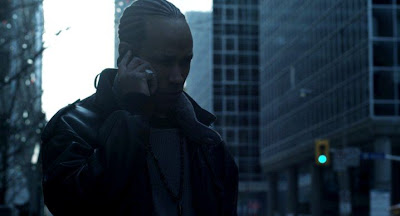 Is this the Ottawa that I know? The action takes place mostly between Bank and O’Connor, and the streets have snow banks a foot high, but there is an unfamiliar coldness to go with frigid January air. Make no mistake, this rare portrait of our Nation’s capital offers a far grittier cityscape than the one made famous in recent photo-ops by Will and Kate. It is also a far more welcome one.
Ottawa has the reputation as the city that shuts down at 5 pm, so what goes on after hours is mostly the stuff of urban legends. It’s fitting, then, that A Violent State starts with the nightlife. An employee at a downtown club is packing away a briefcase full of uncut cocaine when he is gunned down in a robbery. The chain of violence continues when the robber is murdered in turn by out of town ’hood Morris Del Ray (Rams Fax). Morris is a mean, cold-blooded killer on a mission from an unseen employer. 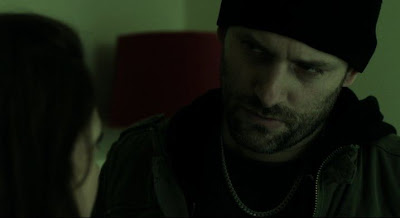 In addition to playing witness to Morris’s irrational force, the audience also learns of his violent state when another night owl sees him leaving the scene of the crime. A tip is soon made to Jordan (played by writer/director Langley), who seems to be running from a past life with Morris. The news of Morris’s return incites in Jordan a need to settle old scores, in spite of the pleas of his pregnant girlfriend, Tia (Jessica Edwards). 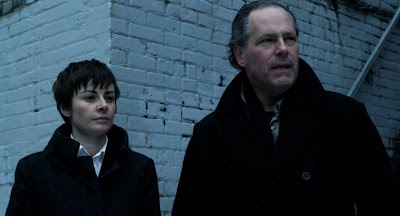 While Jordan investigates into Morris’s reappearance, two Ottawa detectives pursue Morris’s mayhem from the legal side. First is the older and slightly weathered Det. Williams (Roger Thornhill), who is visibly shaken by the unprecedented string of carnage in his quiet city. His new Australian partner, Det. Mickey Naruda (Aphra Williams), joins him at the scene shortly after. Although the petite Williams looks more like a grade eleven student than a seasoned cop (who’s also a widow), she plays Mickey with enough spunk and earnestness to make the casting forgivable. Together, Williams and Mickey are a fun pair of misfits, and they embody a familiar bumpkin-ness of Ottawa that makes the stark violence of the Jordan/Morris storyline far more unsettling.
The last major thread in the complex narrative involves the local Mafioso who owns the club robbed in the opening scene. A Violent State lightly predisposes the audience to dislike the Bytowne fat cat of Joseph Rollinson (Richard Alan Nash), for in his introductory scene, he voices support for private health care. A greater crime than running cocaine! 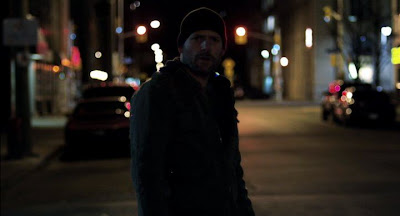 It’s a good thing that Canada still has public health care, though, since A Violent State unleashes a glorious bloodbath upon the streets of Ottawa. Langley, however, carefully avoids rendering the parallel stories of law/street justice in a manner that glorifies said violence. Instead, A Violent State looks at the consequences of drug related crime and it registers the costs of this seedy underworld through a surprisingly high body count. The jarring and unflinching depiction of Morris’s violent deeds may be too great a jolt for some moviegoers; however, those in the audience with a strong stomach and an open mind might be amply rewarded by the realistic showdowns. The film also takes some quick and unexpected turns, making for consistently engaging viewing.
While A Violent State certainly takes risks in its storytelling, the production itself may have benefited from stronger cinematic endowments to make the film more involving. A Violent State features a few titles cards to single its time structure – the film spans from “Yesterday” to “Today” to “Tomorrow” – yet the device seems slightly pretentious on the initial viewing, although the latter card takes on interesting significance by the film’s end. Nevertheless, the film delivers quite impressively for such a small-scale production, and the film certainly demonstrates that given a sizable budget, Langley could go on to make top-grade films. In addition to performing capably as writer, director, and star, Langley also pulls extra duty by acting as producer, cinematographer, editor, and composer of the film – the execs got their money’s worth on this one! 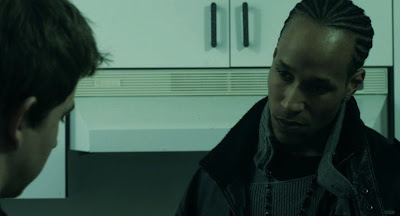 The best find of the film may be newcomer Rams Fax as the steely Del Ray. Fax inhabits the killer with an intimidating presence and a snarly upper lip, yet Morris Del Ray is far from the average killer caricature. The cool look in his eyes suggests Morris would enjoy the rampage regardless if money if was involved, which makes deciphering his motive for the crime spree even more troubling.
Some of the other supporting actors seem a tad self-aware, though most of the other homegrown players are quite impressive. Although the film inspires a sense of community through its celebration of local talent, as well as provides a cheap thrill in seeing the city on the big screen – it’s fun to watch a dramatic shootout on the same street where you parked your car – one can appreciate A Violent State in its own right as a worthy piece of filmmaking. A Violent State is a potent, provocative portrait of Canadiana seen too rarely onscreen.
A Violent State was preceded by the short film Inescapable, which sees a man surprised to find a family friend walk into his home on an assassination job. Inescapable holds fairly well as an extended conversation between the two men, and it is well served by some low-key lighting and an atmospheric score. The film has much in common with the 2010 CFC production Kill Brass, and it might suffer in comparison, but it certainly set a good mood for the night’s feature film.
Posted by Pat Mullen at 8/19/2011 09:09:00 AM