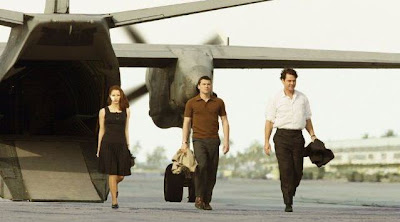 The Debt then cuts back to the first chapter on Rachel’s hunt for Herr Doktor. It is her first field mission, but she’s aided by more experienced agents Stephan and David (Marton Csokas and Sam Worthington play the younger versions, respectively). Stephan and David have already tracked down the Nazi, but Rachel must subdue him as the doctor is now moonlighting as a gynaecologist. As Rachel schedules a few appointments and does some reconnaissance while the doctor explores elsewhere, Bernhardt probes Rachel’s personal life, persuading her to reveal much more than a trained agent would allow. Most damaging to the mission is the inevitable love triangle that emerges between the agents. It’s something that haunts Rachel decades later.
As the younger Rachel, Chastain steals the show and adds another strong performance to her impressive 2011 roster of The Help, Tree of Life, and Jolene. Chastain grants her character a dark ambiguity, and her dangerous conversations with Dr. Bernhardt offer the most engaging mysteries of The Debt. Mirren also provides a hardened version of the character, and the troubled edge each actress grants the character conveys the moral implications of payback and indebtedness without heavy-handedness. Christensen is also a lot of fun as the Nazi-gyno and provides an exciting, snarling baddie. Both generations of Stephan and David, however, are about as stone-cold sober as guards of Buckingham Palace: Wilkinson and Hinds are almost wasted in fairly one-note roles as the older incarnations; however, the younger performers might have elevated the film to more explosive territory had Csokas and Worthington been as ferocious with their characters as Chastain.
The Debt nevertheless remains gripping through Rachel’s tormented relationships with her fellow agents and her hostage. The film becomes increasingly intriguing as the past and present storylines begin to crosscut with more frequency and bring the film to a surprising climax. While the twists are slightly farfetched, they’re wholly compelling thanks to the extent to which the film invests us in Rachel’s need to pay off old debts.
Director John Madden (Shakespeare in Love, Killshot) assembles the film with assured style and perception. The film also receives an extra layer of intrigue thanks to a lively and unexpectedly techno-y score from composer Thomas Newman. While the weight of indebtedness bears heavily upon Rachel, The Debt manages to hold its own substance while providing brisk entertainment as well.
Posted by Pat Mullen at 9/02/2011 03:00:00 PM