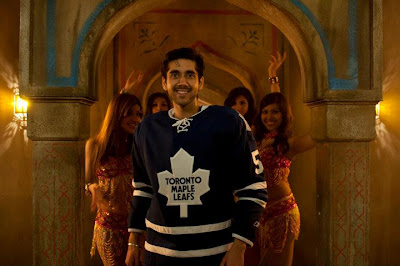 Currently doing gangbusters with critics and audiences south of the border is the Hollywood underdog story Moneyball. Starring Brad Pitt as Oakland A’s coach Billy Beane, Moneyball connects with audiences by tapping into a collective love for America’s shared national past-time, baseball. Here in Canada, where most citizens greet the sport with a yawn, Breakaway attempts to give our own version of movie-going pride by setting an underdog story within the more popular sport of hockey. We tried to do the same last year with Score: A Hockey Musical, and fell a bit short; however, Breakaway thankfully avoids all the Canuck kitsch that made Score so polarizing and therefore offers a better step towards a hockey movie done right.
Whereas Score challenged the idea that a player had to fight to prove that he was “man enough” to play hockey, Breakaway debunks the myth that one must be “white enough” to play the game as well. Rajveer Singh (Vinay Virmani) is a member of Toronto’s Sikh community, who longs to play in the NHL. In the dazzling mock-Bollywood sequence that opens the film, Raj dreams of winning the Stanley Cup finals in overtime and of making his parents proud as he lays his lips on the Stanley Cup 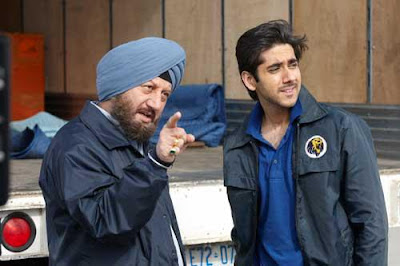 Back in reality, though, big-league hockey is just a dream for Raj. His parents (Anupam Kher and Sakina Jaffrey) disapprove of the game and wish he would spend more time working at the family trucking business instead of playing with his friends at the rink. Raj’s father, Darvesh, especially disapproves of his son’s love for the sport: not only does he think it an irresponsible waste of time, but Darvesh also sees it as symbolic of Raj’s rejection of his Sikh identity, for his son has already cut his hair and refuses to wear a turban.
The biggest obstacle to Raj’s ability to play the game, however, is not is father, but the overall prejudice that hockey is a white man’s sport. At the local rink where Raj plays pick-up with other members of the Sikh community, he and his friends are constantly bullied off the ice the local minor-league team, The Hammerheads. Raj even tries out for The Hammerheads, but is set up for failure. 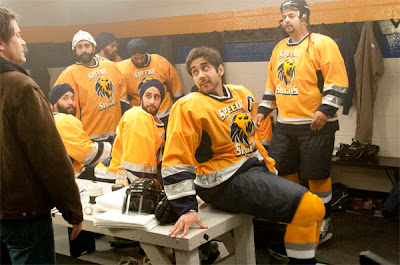 Refusing to be deterred by the overt racism of the Hammerheads, Raj encourages his friends to start an all-Sikh hockey team. His friends are baffled, since nobody on the team is particularly good, but their love for the game urges them to agree. More importantly, an all-Sikh team proves to the Hammerheads that everyone has a right to play. Dubbed the Speedy Singhs, since everyone on the team shares the family name Singh, and enlisting the help of the Zamboni driver (Rob Lowe) as their new coach, Raj leads the team through trials and preliminary games.
There are a few inevitable holdouts to Raj’s efforts though. Firstly, Raj’s father condemns the Speedy Singhs as mere child’s play, which forces Raj to play on the sly. It is not an altogether unexpected plot development, since Darvesh is so vocal on Raj’s love for the game; moreover, Anupam Kher played the similar role of the curmudgeonly father who told Jessminder that she couldn’t play football in Bend it Like Beckham. Also keeping a watchful eye on Raj is his cousin’s soon to be husband, Sonu (Russell Peters), who will soon be running the family business, which also happens to be the team’s sponsor. Armed with Peters’ sardonic wit, Sonu proves an amiable foil to Raj’s efforts. 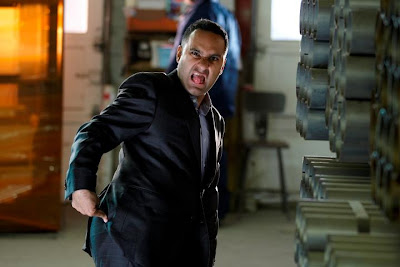 Adding the final complication to the story is Raj’s pursuit of Melissa (Camilla Belle), the coach’s hot sister. Raj is instantly smitten, but Melissa refuses to date hockey players. It’s good for Raj that Melissa plays hard to get, since Darvesh sees them together and criticizes Raj’s love for a white girl. In addition to playing the role of disapproving parent in Bend it Like Beckham, Bollywood fans will remember Kher as the father who disapproved of his child’s love interest in the 1995 hit Diwale Dulhania Le Jayenge, aka DDLJ.
As some of the familiarities and conventions mentioned above suggest, Breakaway doesn’t really break new ground; however, it does put on a nice little show on a fresh surface of ice. While Score championed hockey through cheesy D’oh Canada! musical numbers, Breakaway reinvents Canada’s number one cultural past time anew by transporting the celebratory songs to the Taj Mahal. It also rewrites Score’s hockey fable by blending English and Punjabi on the soundtrack, and by adding some Bollywood-infused dance numbers. There aren’t many musical interludes in Breakaway, just enough to keep it fresh and lively. The film also has a surprise appearance/performance by Drake and it ends with a Punjabi-infused music video featuring Ludacris – impressive casting for a small Canadian film! 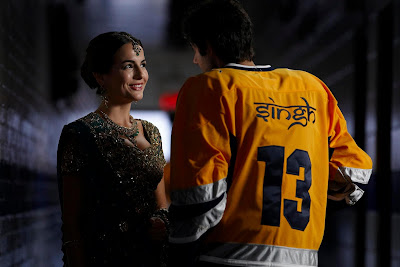 Despite the cheap thrill of the cameos, the stars do not distract from the key players of Breakaway. Virmani gives an earnest, likeable performance as Raj, while Rob Lowe scores some points filling the role of has-been-hockey star turned inspirational coach. Kher nearly steals the show as Raj’s father, while Jaffrey and Peters add some heart and fun to the mix, respectively. Camilla Belle doesn’t quite hold up as Raj’s love interest, though: surely they could have found a stronger actress for the part (or at least a bad one who is also Canadian). The love story provides minor filler, though, because it’s really Raj’s passion for hockey that makes Breakaway score. As the Speedy Singhs come from behind and work their way towards the inevitable showdown with the Hammerheads, the community rallies in support of the team: they even get major press from Raj’s cousin/Sonu’s bride, Reena (played by the lovely Noureen DeWulf). The team quickly becomes a symbol for the community to challenge the mainstream, especially when the Hammerheads challenge the Singhs’ right to wear turbans on the ice instead of helmets: must the players sacrifice their right to religion in order to maintain the status quo?
Using a breezy mix of Bollywood-style fantasy sequences and sports movie clichés, Breakaway effectively deconstructs hockey’s role as a piece of cultural myth making, and shows that everyone can play the game, if only they were given the opportunity. Breakaway might not be in the same league as other inspirational underdog sports movies, but like its contemporary Moneyball, it uses sport’s ability to channel pertinent cultural issues. Breakaway might not win the series, but it hardly drops the puck: Breakaway is a rousing, crowd-pleasing film
Breakaway is currently playing in limited release.
(Note: it is also playing internationally with the title Speedy Singhs)
Posted by Pat Mullen at 10/02/2011 04:49:00 PM