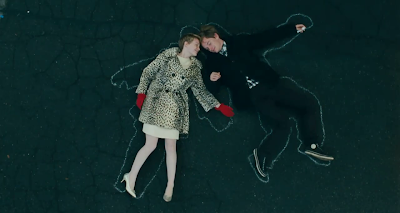 Mmmm… there’s nothing like a good dose of cancer to get you in the mood for some sweet, sweet lovin’. Cancer is the new fetish! So says Restless, the brain-dead romance from director Gus Van Sant. When emo-boy Enoch (Henry Hopper) meets mad-hatter Annabel (Mia Wasikowska) and learns that she has a terminal brain tumour, the news fails to put a bump on their blossoming relationship. Instead, Annabel’s liminal lifespan sets Enoch’s heart ablaze – and Annabel’s as well. The cutesy spin that Restless puts on cancer is repellent. It’s like a bad character flaw of George Costanza – or a gag from Family Guy – gone sour. 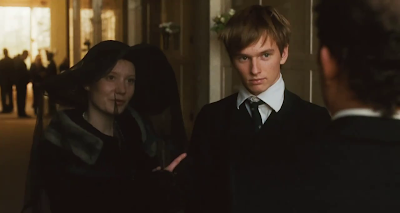 Enoch and Annie first meet when he crashes a memorial service for one of her friends who died of cancer. The service is one of many that Enoch attends. A serial griever, he resembles the long lost son of Marla from Fight Club by using the pain of others to fill the void inside him. Luckily for Enoch, Annabel finds his quirk sweet. She surprises him at his next funeral and delights him by sporting some grieving garb that is half Morticia Addams, half Helena Bonham Carter run amok.
A romance ensues.
Then Annabel cheerfully tells Enoch that she is dying.
The romance explodes into a series of trite clichés in which the young lovers celebrate life by “living in the moment.” This entails sketching their bodies in chalk outlines (while holding hands, obviously) or rehearsing Annabel’s death as if preparing for an epic staging of King Lear. They also share some contrived musing on life and death via Enoch’s imaginary friend, Hiroshi (Ryo Kase), a dead Japanese pilot with whom Enoch plays Battleship before bed. Hiroshi’s role in the film is predictable, but he also provides a convenient metaphor for Restless, for the film is much like a kamikaze pilot on a self-conscious collision course.
A movie about cancer need not be so messy. Take this fall’s other cancer-pic 50/50, for example. 50/50 found something to laugh about in facing a potentially fatal disease, and, in turn, offered a surprising celebration of life; however, Restless merely contends with pulling heartstrings while offering a tale of love lost too soon. 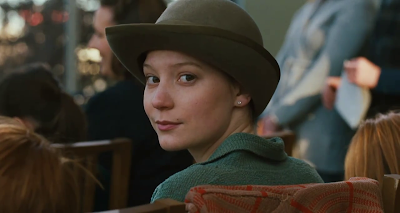 Enoch and Annabel are simply too coy, too quirky, and too happy dappy for their own good. As they traipse about in their ironic Gatsby threads (the film has most annoying costumes I've seen in a film in quite some time) and spout ignorant yet poetic musings, they more resemble distant cousins of George and Sally from The Art of Getting By, rather than appealing lovebirds like, say, Barney and Miriam. Wasikowska, however, makes Restless a mildly heartrending romp thanks to her charming portrayal of Annabel, but she simply can’t overcome the contrivance of the premise to make the yarn work.
Hipsters will undoubtedly rejoice over this plucky tale of ill-fated woe, and the stroppy eclectic soundtrack will surely have tens of awestruck fans jabbing horizontal scars in their wrists. Other moviegoers can merely contend with the self-inflicted pain of Restless; however, both parties will acknowledge the film’s wrist-cutter morale of “across for show, down for go.” Restless contends with serving up a superficial slice of life; nevertheless, the shallow rhetoric of Restless should inspire all viewers to go home and cut deep.
Restless plays in Ottawa at The ByTowne through Oct. 23.
Posted by Pat Mullen at 10/16/2011 08:31:00 PM