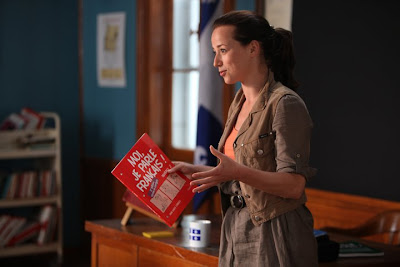 Just in time for Canadian Thanksgiving comes a good, old-fashioned dose of political incorrectness. Taking aim at all Canadians from Quebec to the ROC (rest of Canada), French Immersion leaves no Canuck unscathed. The film lampoons Canada’s political climate by drawing upon its two official languages, as well as the stereotypes and prejudices that exist between Anglophones and Francophones. The satire of French Immersion is fearless, and the winning quality of the script by Kevin Tierney and Jefferson Lewis is that it’s funny because it’s true. 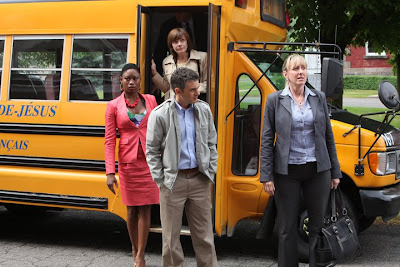 Visiting la petite village de St. Isidore-du-Coeur-de-Jésus are a dozen citizens of English speaking Canadians, as well as one New Yorker. Thankfully, the film focuses only on a handful of them, so nothing gets lost in translation. Arriving from Calgary is Colin (Fred Ewanuik), a recently divorced man seeking French language skills required for a promotion. Also on a job-related retreat is Aretha (Olunike Adeliyi), a Jamaican-born but Toronto-based flight attendant who has already taken the immersion course twice. “I speak French,” Aretha attests: it’s simply her customers who can’t understand her. (Maybe they tried to order a 7-Up.). Bobby Sexton (Gavin Crawford) speaks French as poorly as Aretha does, but he admits the shortcoming, and he hopes that his honest appeal to learn la belle langue will improve his bid to gain the leadership of the Completely Canadian Party and become the first openly gay Prime Minister. Shadowing Bobby is Cathy (Martha Burns), an RCMP officer moonlighting as a fire-woman: her covert skills easily allow her to sink in best avec les Québécois. Rounding out the Anglos is Jonathan (Jacob Tierney), an American who hopes to use French Immersion as an opportunity to research French cuisine… little does he know that these Frenchies soak everything in maple syrup. They even add it to shepherd’s pie.
The task of these students is to spend two weeks speaking nothing but French amongst the townspeople of St. Isidore-du-Coeur-de-Jésus, a small remote town in Northern Quebec. It’s the perfect place for Anglo-Canadians to learn their other official language, since the town is prototypically Québécois: virtually all the townspeople speak nothing but French. They are also a bunch of fervent Catholics and staunch separatists. Furthermore, most of the townspeople share the last name Tremblay, but whether they’re all inbred or simply related remains unclear. 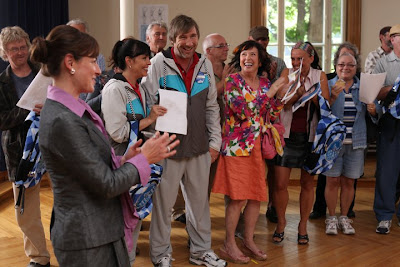 The headmistress of the Immersion school, Mme. Sylvie Tremblay (Pascale Bussières) assigns the students to the townspeople through a hilarious lottery. The residents of St. Isidore-du-Coeur-de-Jésus play a rousing game of ANGLO (re: BINGO), with the winners each receiving a student. Aretha is an especially hot prize: two sisters squabble in vain to claim her, as she is the most exotic member of the group. As the opening scenes suggest, St. Isidore is a sheltered town indeed. 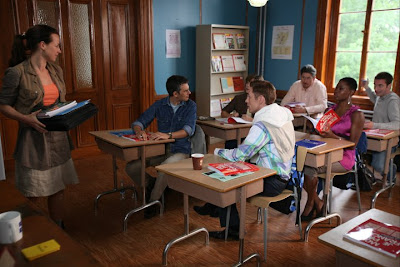 Doing her best to instruct the students is Mme. Julie Tremblay (Karine Vanasse). Julie’s efforts to make her pupils bilingual often meets with hilarious results: mispronunciations and garbled Franglais phrases arise aplenty, as do many little yellow cards that remind students to speak only “en français”. Countless other linguistic misunderstandings ensue, such as Bobby’s interpretation that his host family lost their young daughter Cegep to a bus accident while she was on her way to school (her death provides a nice emotional speech to motivate Bobby’s campaign), or Cathy and Aretha’s botched attempt to go dancing at a roadside bar advertising “danseuses”. In a scene that provides a not to subtle theft from Annie Hall, Jonathan shocks his host family by informing them that he is Jewish, which instantly prompts his elderly host to perform a bedtime baptism. 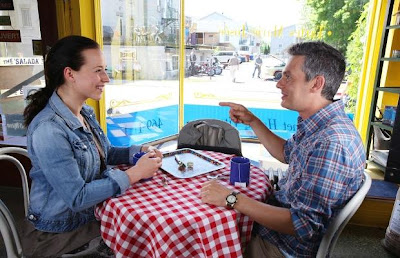 The townspeople also have lots to learn from their students. Mme. Tremblay (Sylvie) learns that the school may soon close due to complaints from previous attendees, so she quickly takes advantage of Bobby’s status and seduces him into helping out. Neither of them gets lucky, but it enables Senator Tremblay (Robert Charlebois), Mme. Tremblay’s dirty old Frenchman of a father, to both score with Bobby’s sexy secretary and make Bobby an inadvertent spokesman for le Québec libre. Finally, while Mme. Julie aims to teach her pupils linguistic skills, Colin hopes to teach her how to French kiss.
Nevertheless, as the students and townspeople interact, they teach one another that the linguistic barriers are rather arbitrary in the vast political hodge-podge of Canada’s cultural landscape. Jonathan even meets one resident (Ali Hassan) who ended up in the small town when he moved from Mumbai to Montreal and was incorrectly informed that all the “Indians” live up North. “They’re not even Indians!” he laments. When all the Anglo-Franco tensions reach their inevitable boiling point, however, the students and townspeople decide to settle things the Canadian way: through a hockey match. As les maudits Anglais face off against the Separatist Pepsis, both sides think that all their problems will simply disappear after the grudge match. As Julie observes, though, their game could cost the school its reputation. It seems the petty squabble prevents them all from seeing the larger picture. 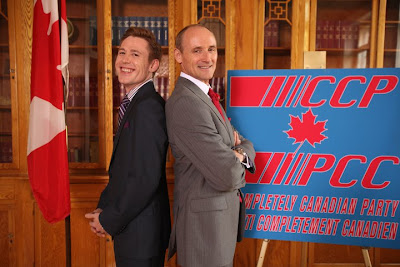 French Immersion therefore offers a clear and candid take on contemporary Canadiana. Tierney et al succeed because their film is not afraid to expose stereotypes and then explode them hyperbolically, making their use both comic and symbolic. The film also offers a nice blend of French and English in the dialogue, and the subtitles are used to comedic effect as well, as they often spell out linguistic gaffs to both sides of the audience. The premise of the film – the French immersion course – allows the linguistic transitions to appear without contrivance; the course also ensures that none of the humour of the witty script is lost in translation. The latter is also well-served by the lively ensemble. 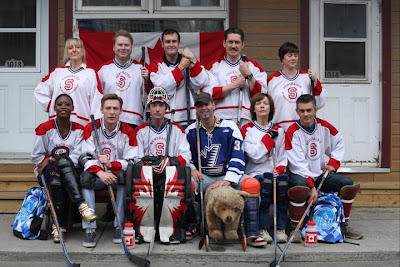 French Immersion should please audiences both Canadian and non-Canadian. The film admittedly has plenty of inside jokes aimed at Canuck moviegoers, but the humour should translate well to foreign audiences because French Immersion works on the level of the personal to expose the greater foibles that have so long plagued Canadians. Drawing upon the idiosyncrasies of Canada’s linguistic divide¸ French Immersion offers a broad range of personal and mildly political humour (it also throws in a random Bollywood number for good measure). The result is light-hearted, but also a refreshing and surprising success. The film is consistently funny and unmistakably Canadian, so what makes French Immersion so funny – and so effective – is the realisation that we’re laughing at ourselves.
French Immersion is currently playing in Ottawa at the AMC Kanata and SilverCity Gloucester
Posted by Pat Mullen at 10/06/2011 10:20:00 PM