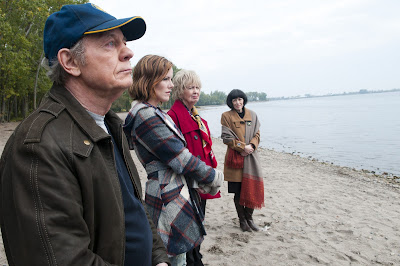 Forty years ago, Goin’ Down the Road opened in Canadian theatres and introduced to moviegoers Pete and Joey, two hard-lucked guys from Nova Scotia trying to catch a break in Toronto. Goin’ Down the Road is the quintessential “cheap Canadian movie”: it’s like a piece of Third Cinema with some Bruce Cockburn songs slapped on the soundtrack, but the story of these working class guys struck a chord with Canadian audiences, as did the familiar shots of the Canadian landscape and some seedy Yonge Street locations. It wasn’t a perfect film, but it broke ground for representing Canada to Canadians. In many ways the most important English Canadian film made up to that point (and arguably still today), Goin’ Down the Road is like the granddaddy of Canadian film. 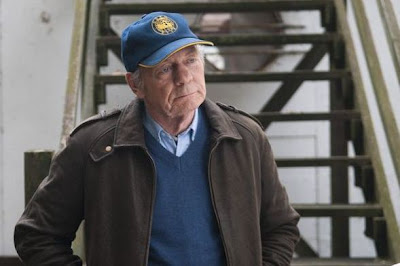 It is within this high legacy that comes Down the Road Again, an unnecessary but by no means unwelcome follow-up to the Canuck classic. Down the Road opens with sad news. Pete (Doug McGrath) is working his last days as a mail carrier for Canada Post in Vancouver. After retirement, while sitting around in his sparsely furnished home, Pete receives a messenger who informs him that his pal Joey recently died during an operation. (Paul Bradley, who played Joey in the original, passed away in 2003). The visitor hands over Joey’s ashes, along with a series of letters in which Joey outlines his final wishes to Pete. Saddened by his friend’s passing, Pete agrees to honour Joey’s memory.
The first envelope in the bundle features a big wad of cash. It also includes a letter asking Pete to soup up the old Chevy Impala that carried the friends on their initial road trip. Joey wants Pete to go down the road once again, making the trip back to Cape Breton where he is to scatter Joey’s ashes. On the way, Joey wants Pete to make a pit stop in Toronto and deliver a second letter to Betty (Jayne Eastwood) and the daughter he left behind. 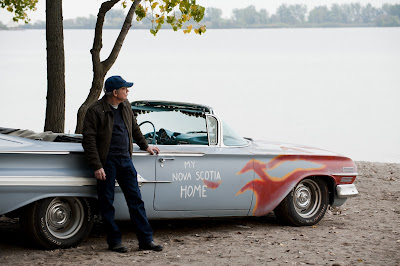 During Pete’s trip back to the big T.O., Down the Road Again takes viewers on a ride down memory lane. The old Chevy and Doug McGrath’s face look a little worn for wear, yet the familiar tone and story of this trip is a ride one settles into easily. When coupled with expansive shots of the B.C. landscape and some intercuts to footage from the 1970 film, Down the Road Again continues the voyage of the classic and brings to its final destination.
Using more footage from the original (a device that the film employs a bit too often), Pete once again arrives in the big city. Before making his way to see Betty, who still blames Pete for encouraging Joey to leave her and the baby during the seventies, Pete once again treads by the grungy strip clubs and dingy pubs of downtown Toronto. (Once again accompanied by intercuts to the original.) Pete then shows up on Betty’s doorstep and informs her that the love of her life is dead. 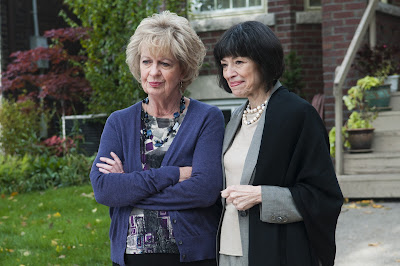 Betty’s sadness of this news quickly melts away the hostility with which she greets Pete at the door. She, Pete, and her friend Selina (Cayle Chernin) then sip some Scotch and reminisce about their days together with Joey in Toronto. The reunion is a touching one and an especially sweet one to watch too, for as Selina’s oft-thrown glances at Pete suggest, it wasn’t only Betty whose love drove off to Vancouver decades ago. As Selina, the late Chernin offers a fine performance for Canadian viewers to remember her by.
The nostalgia is briefly interrupted when Betty’s fiery daughter, Betty Jo (Kathleen Robertson), walks in and learns of her father’s death. As a request to learn the father she never knew, Betty Jo cons Pete into taking her with him en route to Nova Scotia to disperse Joey’s ashes. With Betty Jo along for the ride, Down the Road Again unearths more of what happened between the original film and the present day, with Pete sentimentally recalling his and Joey’s vagabond way of making a living in Canada. The pleasant road trip takes the pair along many scenic stops from the Greater Toronto Area to a cosy stopover in New Brunswick (which is actually Flapjacks restaurant near Caledon) until they finally reach their destination of Cape Breton Island. 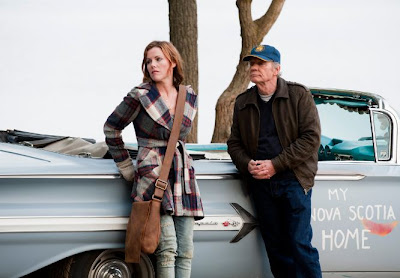 It’s in Cape Breton that the cast of the original reunite again. The final act also explains some of the past motivations for Pete’s aimlessness and Joey’s desertion of Betty, but the new turn in the road does not play out nearly as well as it should. Nevertheless, the second reunion offers a bittersweet bid of farewell to Joey, and consequently a surprisingly moving nod of gratitude to the legacy of Goin’ Down the Road.
McGrath is just as likable and endearing as he was in the original, so the second trip is much appreciated. The same goes for Jayne Eastwood’s especially strong work as Betty, offering the film’s best performance with a fine blending of acerbic delivery and sensitive deference to Joey’s memory. Kathleen Robertson does quite well as Betty Jo, making an amiable newcomer to fill Joey’s absence. Finally, the film itself looks much better than the original did, so the heightened production value of the second Road movie suggests that Canadian movies have come a long way.
While Down the Road Again might not add anything new, it certainly does not provide a disservice to the canon. (It’s hardly the Godfather III of Canadian film.) The film honours the memory of the original quite well and provides a fun vehicle for bringing to a close one of the most touching stories of our nation’s cinema. Down the Road Again is a pleasing bit of nostalgia for Canadian moviegoers, and one that will hopefully lead new a generation to open the Canadian film vault and discover a classic.
Down the Road Again is currently playing in Ottawa at the AMC Kanata and in Toronto at the Varsity and Cumberland cinemas.
*Photo credit: Caitlin Cronenberg
Posted by Pat Mullen at 10/29/2011 01:22:00 PM