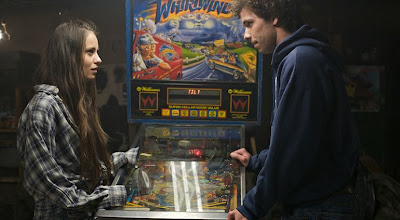 Tilt is a fine debut for director/co-writer Viktor Chouchkov. The film sets a lively story against a provocative political backdrop and tells it in a fresh original voice. The title comes from an early scene between Stash (Yavor Baharov) and Becky (Radina Kardjilova). As the friends play pinball in their dingy hangout, Stash explains that “tilt” is the word for defeat. He describes all the ways a player can work to beat the machine, learning when to tap, when to defend, or even when to simply cheat and lift the table. Angel (Ivaylo Dragiev)  interrupts, though, and says that no matter how hard you try, the machine always wins. 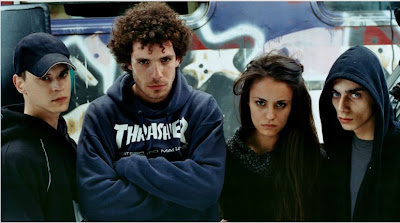 The setting is Bulgaria, 1990. A group of four friends – Stash, Gogo (Ovanes Torosian), Angel, and B-Gum (Alexander Sano) – make a living hanging out in an underground hole, playing pinball and distributing bootleg porn on VHS. In the midst of the political unease of Eastern Europe at that time, someone rats on the friends’ smut business and they find themselves thrown into the Bulgaria’s shady legal system.
To their luck, the system is too crowded to fit the friends into a cell. However, the cantankerous officers decide to call the friends back in to the HQ on a daily basis. Frustrated with the poor treatment and the lack of other opportunity to better themselves, three of the friends – Stash, Gogo, and Angel – hitch a train to Germany upon seeing the fall of the Berlin Wall on TV. 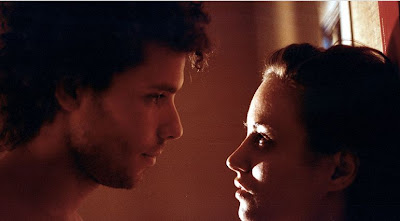 Also joining in is Stash’s new girlfriend Evgenia aka Becky. Stash and Becky meet during the group’s pre-jail days, as he wowed her with his mad/unfortunate skateboarding skills. (Note: broken limbs are a sure-fire way to get a girl’s phone number!) Although Stash and Becky fall quickly and madly in love, their relationship comes under strain when Gogo, Angel, and B-Gum suspect Becky of being the one who tipped off the police. Complicating things further, however, is Becky’s father, a police high-ranking officer, who insists that Becky have nothing to do with a hooligan like Stash, and goes so far as to separate the two by force.
As the friends try to escape the misery of their current situation, their arrival in Germany throws an odd perspective on their life back home. Finding themselves in a small town with a foreign language and only meager job prospects, the friends take up with other migrants, forming a sort of pseudo-vagabond commune. While the friends huddle around their TV and watch reports on the declining social conditions back in Bulgaria, Tilt shows a generation in a place of aimlessness and rootlessness. The friends are forced to wander and scrap together what they can, resorting to petty crime now and then; however dire their situation in Berlin seems, though, they all agree that there is less opportunity back home.
Except for Becky. At the heart of Tilt is the complicated love story between Stash and Becky. Stash’s longing for her eventually brings the friends back to Bulgaria, where they find their homeland a far different place than they left it. (Notice the changes in mise-en-scene, especially the new graffiti.) Through the changes between Stash and Becky, as well as the forces that keep them apart, so too does Tilt effectively show the strains and psychological pressures faced by their generation. Tilt is much more than a love story. 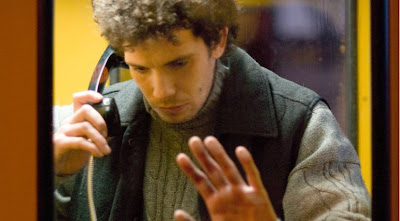 Well played by a handful of good performances, particularly Baharov as Stash and a funny Torosian as Gogo, and shot in a sober realist style, but infused with light and humour, Tilt is confrontational in its political ponderings and its fresh cinematic language. The film is frequently funny, yet the surprising and jarring ending ensures that Chouchkov doesn’t dumb things down simply to please the audience. Chouchkov’s film – and Bulgaria’s official entry for Best Foreign Language Film for the upcoming Oscars – should satisfy art-house auds, as well as act as a pleasant first dip for viewers less frequently inclined to stick their toes into the waters of world cinema.
Tilt was reviewed as part of this year's European Union Film Festival by the CFI
Posted by Pat Mullen at 11/26/2011 02:19:00 PM