The Best from Toronto comes to Ottawa!

I'm very happy to report that Alexander Payne's The Descendants opens in Ottawa this week! As you might recall, it was easily the best film I saw at the Toronto International Film Festival this year. The Descendants stars George Clooney as Matt King, a hard-working realtor who finds himself in a quandry when the time comes to take his wife off life support, as she is in a vegetative state after a boating accident. Matt discovers that his wife was unfaithful, and he undertakes the horrible task of confronting his wife's lover (Matthew Lillard) so that a) he can accept his wife's infidelity and b) her lover can say goodbye before Matt pulls the plug. It might sound dark, but this story of the King Family Tree is one of the smartest, funniest, and warmest films this year. 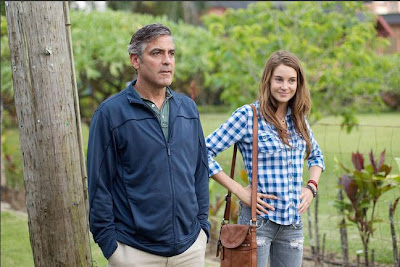 The Descendants also has the perfect family of actors. George Clooney gives one of the best performances of his career as Matt, a role that allows Clooney to embellish the suave, charismatic traits of his persona, but also the fine dramatic maturity he's been showing off lately. Clooney's well-paired with actors Amara Miller and Shailene Woodley as Matt's daughters: Shailene Woodley especially gives a star-making performance, as her comedic timing and dramatic chops frequently threaten to steal the spotlight from Clooney. (The pool scene makes a particularly good clip for Oscar night.) Two other actors that I neglected to mention in my TIFF review, but are equally worthy of praise are Robert Forster and Judy Greer. Forster plays Matt's father in law, giving a hilariously ornery performance that's his best work since Max Cherry; Greer appears as in the complicated role of Matt's wife's boyfriend's wife, and her small screentime offers an impressive element to the tragicomic dynamic of the film.

Based on the novel by Kaui Hart Hemmings, which I have yet to read but is next on my reading list as I finish the last pages of Tinker Tailor Soldier Spy, The Descendants is another impeccably written film by Alexander Payne. As I wrote in my review during the festival, "Payne does a remarkable feat of balancing the heart and the humour of the film. The Descendants has the rare skill of being able to elicit uproarious laughter one moment, but then prompt tears the next. In his first film since Sideways, Payne makes a film that is equally strong as his last one, but in some ways, The Descendants more neatly blends the flaws and follies of everyday folks. The Descendants is a sharp, funny, and endearing story of family ties."

The best of the festival and now one of the best of the year, one could also call The Descendants "sheer perfection from first frame to last." (Sorry, I couldn't resist.)