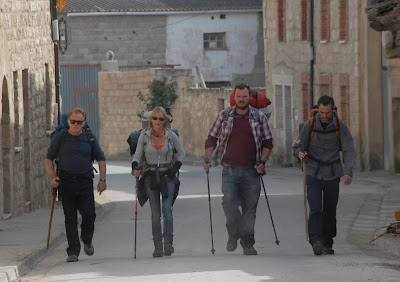 In his latest feature as writer/director, Emilio Estevez takes us down the beaten track of the road movie. The Way employs the equally common trope of the multigenerational journey, in which family members “share” a journey and discover themselves/each other along the way. (Re: Incendies, Down the Road Again.) It’s a mild disappointment after the perceptive Bobby, but while Estevez treads a familiar path in The Way, it is one mostly worth taking. 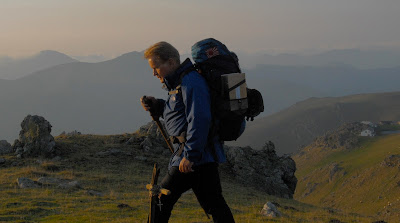 The journey literally goes along The Way, which is the nickname for “El camino de Santiago,” a trail that runs from France to Spain. It’s a path on which many travellers embark on a spiritual journey or, in some cases, for trendy vacations. Making this trip is Tom, an aged ophthalmologist played by Martin Sheen. While Tom makes a living by helping others see the world more clearly, he fails to focus on the finer things himself; however, Tom learns to look at the world through a new perspective when he learns that his son, Daniel (Emilio Estevez), died in an accident during a trip around the world.
Tom goes to his son’s final destination – the starting point of El camino – to collect Daniel’s remains. While talking things over with the local police commissioner (Tcheky Karo), Tom sombrely relives his final conversation with Daniel: a cold, stern fatherly talk in which he judged his son for opting to halt his PhD studies in order to find himself through travel. By reviewing this conversation, though, Tom recalls Daniel’s harsh observation that he was leaving America because, unlike his father, he did not want to experience life from behind a desk. To honour his son’s last wishes, Tom decides to complete Daniel’s journey and scatter his ashes along The Way. As Tom straps on Daniel’s large assortment of gear from The North FaceTM and begins the hike along El camino de Santiago, he sees his son everywhere he looks. Daniel’s first appearances offer a touching image of the presence of the past guiding his father’s journey, albeit a haunting one too. 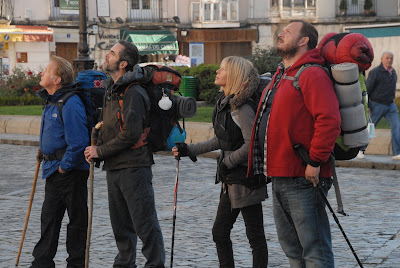 During his trek, Tom encounters a few other travellers making the pilgrimage to Spain. The first to stumble upon Tom is Joost (Yorick van Wageningen), a happy pot-smoking Dutchman who claims to be hiking The Way to lose weight, although he spends most of the trip searching for a party or indulging in roast lamb. The next wary traveller is Sarah (a near unrecognizable Deborah Kara Unger). Sarah is an angry chain-smoking Canadian who claims to be making the journey as an incentive to quit smoking. The last to join is Jack from Ireland (James Nesbitt) an energetic non-smoking Irishman who claims to be walking The Way as inspiration/research for a novel. Like Tom, their brief reasons for making the trip are pat and elusive, so one can presume that the film will probe deeper the farther it takes us along their voyage.
Unfortunately, though, The Way gets a bit lost. The quartet of characters seems rigidly defined at first impression. Blunt, repetitive dialogue hammers in their flaws at the beginning. Then first glances become second ones and Tom, Joost, Sarah, and James desperately cling to their character traits more firmly than the cast of Lost. For a film that employs the journey trope, The Way inadequately traverses the route of discovery one expects to find in such a well-tread motif. It’s as if the travellers are on a flat circular path, arriving back at their point of departure without ever having to climb.
There is, admittedly, an abrupt moment of self-discovery and serenity at the end – especially for Tom. The small changes arrive so suddenly, though, that I found myself yearning to see these characters evolve much more strongly than they actually did. Most complicated, though, is the fact that the travellers enjoy their moment of clarity only when Tom treats them to a night at a posh five-star hotel they stumble upon near the end of their trip. It seems that personal growth comes not through walking sticks and hiking boots, but rather through plush bathrobes and smart pedicures.
The Way also relates the travellers’ quest via an odd soundtrack selection. The music tracks are a bit too Zach Braff-y to suit the tone and the random use of Alanis Morissette’s “Thank U” provoked a collective snicker from the Ottawa audience. Tom’s fondness for James Taylor fits the mood, though, and the pieces of original music are often affective.

Despite the bumps along the journey, The Way is a frequently moving film thanks to the touching lead performance by Martin Sheen. Collaborating once again, the father-son duo of Sheen and Estevez complements the family dynamic of the film, and makes it a poignant and personal story. The Way is frequently funny and a sincere humanitarian essay on self-discovery.  Estevez captures his father’s journey through the beautiful lensing of cinematographer Juan Miguel Azpiroz, whose aesthetically pleasing landscapes will undoubtedly inspire some moviegoers to book a flight to Spain. Emilio Estevez again proves himself a competent realist filmmaker who is willing to tell personal and affecting stories. The Way is a worthwhile trip and one you can bring the whole family on, but perhaps one best taken with the detour offered by the ‘skip a scene’ option of DVDs.
The Way is currently playing at The ByTowne in Ottawa
Posted by Pat Mullen at 11/17/2011 04:09:00 PM