The Gods Must be Crazy 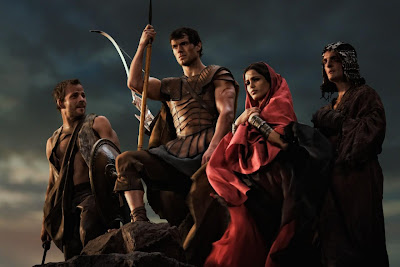 A dopey sword-and-sandals pic, Immortals at least gets credit for being a step above Trespass, although the latter almost seems better by comparison since it clearly lacked higher aspirations. Immortals is trash. Not the good ’ol blood-spattered and sleazy kind of trash that makes for fun curbside viewing, mind you. Immortals is rather the kind of trash that wraps itself in gilded olive branches, hoping that the fancy surface obscures the rotting bits of cheese and ham that comprise the substance of such mindless rubbish. Aside from thirteen-year-old fanboys who squeal over three-dimensional blood splatters, Immortals is just about as exciting as a visit from Hypnos, the god of sleep. 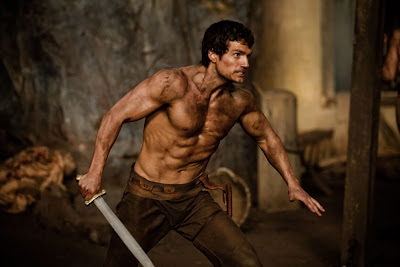 Unfortunately, the sandman never comes to relieve your tired eyes, which are weary from the heavy burden of 3D glasses. Instead, viewers are left with the chiselled Adonis Henry Cavill (re: Charles from The Tudors) in the central role of Theseus. While Cavill’s abs look impressive in 3D, there is little else to admire for in Theseus’s nonsensical quest to avenge his mother, kill a badass warlord (Mickey Rourke), and save a comely maiden (Freida Pinto). As scripted by Charley and Vlas Parlapanides, Immortals unfurls with Herculean fury; however, while the bodies pile up as King Hyperion rapes and pillages the land of the gods, there is little drive to tempt one to join in the lunacy. Adding to the video game logic of this mindless frenzy are the idle musings of Zeus et al as they watch from their ivory tower. The constant tease at divine intervention is but one way that Immortals aspires – poorly, I might add – to align itself within the higher arts. 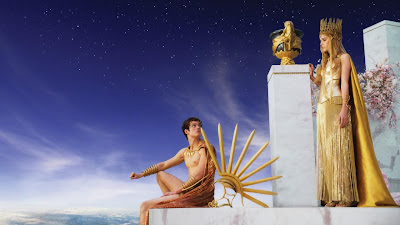 The gods must be crazy to watch this madness by choice, but perhaps they too heard that Tarsem Singh was directing. Immortals disappoints in this regard, too. For those who recall the sumptuous and entrancing compositions of the director’s previous works (The Cell, The Fall), Immortals is a big step backwards when it should be a great leap forwards. A director whose work is usually so visually entrancing, Singh’s style seems ideally tailored to the sensorial boldness of 3D filmmaking. Immortals, however, is a missed opportunity, since Singh rarely incorporates the extra dimension into his visual scheme and instead offers a surprisingly flat composition whose digital rendering simply looks cheesy (and fuzzy) through the new lenses. The 3D visuals, moreover, pop up so infrequently that one need not bother spending the extra money for the added effect. The gimmick adds solely in the scenes on Mount Olympus (as well as in the occasional decapitation), but it detracts from many of the hand-to-hand action scenes, which simply seem blurry. Add to the haphazard visuals some wonky sound work and some disjointed editing, and Immortals equals one big mess. 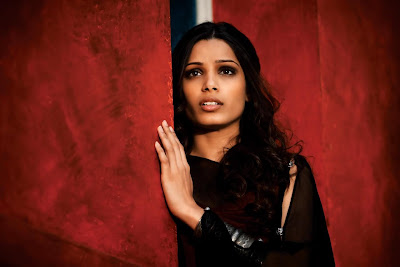 As further evidence that Immortals is one of the year’s lesser offerings, please allow for one more fact: after piling over 500 words upon this fetid trash heap, I have yet to stomp on the cardboard box that is Freida Pinto. Once again, Pinto proves that she’s among the prettiest faces in Hollywood, but once again, she also proves that she can’t carry a film. Even in 3D, the girl is as flat as a pancake. To Pinto’s credit, though, her performance hardly ranks as one of the lesser aspects of the film. This isn’t saying much, but it’s the closest she’ll get to a compliment from me. A gold star for you, Miss Pinto!
Immortals is now playing in wide release
Posted by Pat Mullen at 11/11/2011 08:16:00 AM