Nic and Nic Cook a Turkey 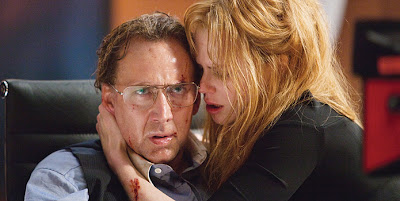 Straight from Roy Thomson Hall to the Bargain Bin comes Trespass, the TIFF turkey in which Academy Award winners Nicholas Cage and Nicole Kidman prostitute their talent for some paychecks. Trespass is a beyond ludicrous tale of a family in terror. The murder and the mayhem are as dumb and as badly scripted as even the worst of episodes of CSI: Miami. The question is, just what possessed these two A-listers to sign on? Contractual obligation, one hopes. Ditto for director Joel Schumacher, who creates such a mess that even Horatio Caine wouldn’t be able to clean it up, lest he sweep away all the DVDs collecting dust at Wal-Mart. Hopefully the new career-low the talents reach with Trespass will teach them to choose more wisely in the future.
An embarrassment for all parties involved.
Trespass is available to rent/own on DVD & Blu-ray
Posted by Pat Mullen at 11/04/2011 03:13:00 PM