The Apprenticeship of Roman Kogler 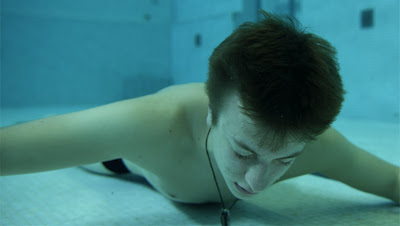 Roman (Thomas Schubert) passes through the high concrete walls of a juvenile detention centre. Upon his return, he strips before a pair of guards, bends over, and coughs. He has been through this routine before, having spent almost the entirety of his adolescence in a cell. Before that, Roman was in and out of orphanages and foster homes, as his mother gave him up when he was a baby. A lost, seemingly unwanted child, Roman floats through life without care.
Thanks to the aforementioned scene, as well as Roman’s biography itself, Breathing echoes Jacques Audiard’s harrowing prison drama A Prophet. While Breathing is far less gritty and visceral than the French masterwork, it nevertheless offers a similarly potent story of a young man who has grown up while removed from everyday life. Breathing more readily relates to the 2008 Japanese film Departures, just without the unabashed sentimentality that many viewers of the latter film found repellent. Like Departures, Breathing celebrates life by examining the rituals of death. 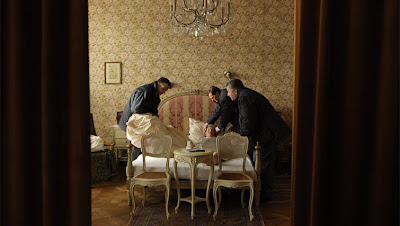 Roman gets a break from his cell when he takes a job as a coroner’s assistant. The apprenticeship has practical reasons, since Roman is due for a parole hearing and needs to show that he can easily transition into society if he is released. He doesn’t take to the job easily, though, and seems a little squeamish and shy around his first few corpses.
Roman returns to juvy from his job every day, performing the same old routine. Each time, though, he seems a bit more withdrawn, rather than invigorated by how close he is to freedom. Every day, Roman finds himself floating in the centre’s pool, testing his limits and experimenting with life and death. He always surfaces, though, and returns to work the next day.
The work is visibly draining for Roman. As the film later reveals, and does so startlingly, Roman is in detention because he killed a boy at age fourteen. It therefore appears that he took this morbid job as a kind of penance, forcing himself to confront his past actions whenever he handles a new corpse: note his volatile reaction at his first homicide job. 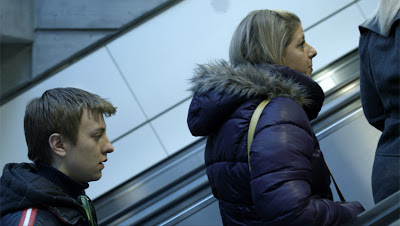 While Roman’s job sounds bleak, it is often surprisingly funny. The civil servants of death have an odd job. They are quirky and have an upbeat, idiosyncratic way of coping with the daily reminders of their mortality. Writer/director Karl Markovics has a droll way of finding the humour in the slight banalities in this odd branch of the civil service. (In Austria, it seems that undertaking is not the privately owned industry cash cow it is in North America.) Adding a sense of Six Feet Underness to the film experience, too, Breathing handles a heavy subject with heart and humour: while the laughs alleviate the sombreness of the tone, they never detract from the gravity of Roman’s story.
Roman gets a second mission when arrives at the home of a dead woman who shares his family name. He wonders if she’s his mother. She is not; subsequently, Roman finds himself entering a second quest, searching for his mother. It seems that this young man is willing to do anything – and everything – to put his soul at ease before he can get his life back on track. 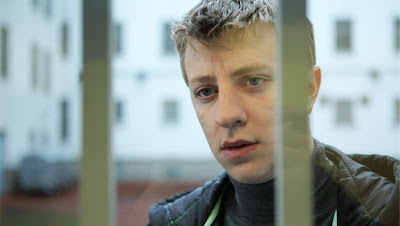 As the young Roman, Thomas Schubert displays impressive maturity. He allows his character to evolve slowly and quietly; Roman only explodes when he’s underwater. For his first role, it’s remarkable how well Schubert carries every frame of the film. Perhaps it helps that Markovics is also an actor, a veteran of Austrian cinema who appeared in the 2007 Oscar winner The Counterfeiters. In his feature debut as a director, Markovics excels in his careful balancing of the film’s tone, which is best held through the restrained and minimalist visual style of the film.
Markovics’ connection to The Counterfeiters is worth mentioning, as Breathing is this year’s official submission by Austria to the Best Foreign Language Film category at the Oscars. It’s a worthy entry, too. Like the 2008 winner Departures, Breathing is an emotional, cathartic story of second chances and of embracing life. As did Departures, Breathing should appeal to a large audience through its impressive ability to raise heavy themes without weighing you down. Breathing is an affecting film, and one very much worth seeking out.
Breathing screened at the European Union Film Festival in Ottawa, hosted by the Canadian Film Institute.
Posted by Pat Mullen at 12/04/2011 11:16:00 PM