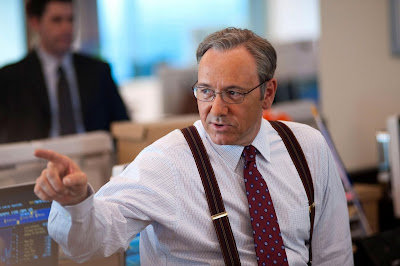 Fourteen years ago, Gordon Gekko convinced us that greed was good. Now, after seeing what the greedy will do to cover assets, Gordon seems wrong. Margin Call is like the anti-Wall Street, dramatizing the harshest aspects of the financial world, without glamourizing or glorifying it. Margin Call provocatively stabs at the black heart of American capitalism, and offers a damning portrait of the times. It’s hard to imagine a 2011 film more timely than Margin Call. Easily the “zeitgeist film” of the year, Margin Call lets us occupy Wall Street for two hours and watch the machinery of the 1% as they willingly make the decisions that precipitate the economic meltdown. A talky, spectacularly acted ensemble film in the vein of Glengarry Glen Ross, the drama of Margin Call gains an additional jolt of urgency through its relevancy. 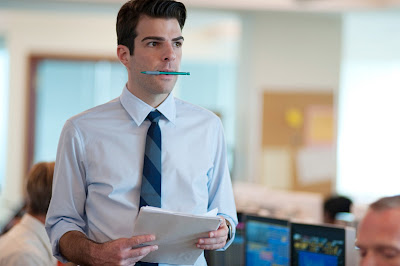 It’s an awful day at the office. Peter Sullivan (an impressive Zachary Quinto) sees 80% of his coworkers on the floor get their notice when the honchos at the firm decide to clean house. Things are tough in these times, so much that Peter’s boss, Eric (Stanley Tucci), gets the ax after twenty years with the company. It’s bad news for the firm, too, since Eric was about to crack something big. As security escorts Eric from the building, Peter runs over to say a quick thanks and farewell. Eric gives him a parting gift – a USB with the last thing he was working on. “Be careful,” are the final words Eric says before the doors close.
Curiosity kills the cat when Peter looks at Eric’s work and sees an ominous future for the firm. He punches some numbers and does some calculation, but nothing looks good. At 11 pm he sounds the alarm and calls in his co-worker, Seth (Penn Badgley), and new boss, Will (Paul Bettany), to look at the numbers. It seems that Eric foresaw that the firm was trading poorly, holding on to worthless assets they could never recoup. Moreover, the guys realize that any attempt to liquidate the assets would cripple competitors, creating a ripple effect of poverty beyond Wall Street. 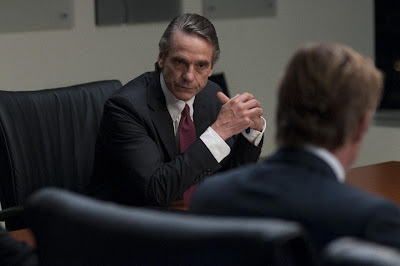 In comes the cavalry. Within the hour, all the execs are back at the firm. They listen to Peter’s equation and try their best to understand: he’s a rocket scientist, but numbers mean nothing to the top players at the firm. As Seth suggests, they’re basically high-priced bookies at an off-track betting location. Tuld (Jeremy Irons), the top bookie, has a strategy that allows the firm to escape somewhat intact, with only having to break a relatively low number of thumbs.
“Be first. Be smarter. Or cheat,” is Tuld’s motto. He doesn’t like to cheat (although what ensues doesn’t seem much different). Nor does he think the firm (rocket scientists and all) can outsmart a loss this big. The only solution is to cast the first stone. Get the losses over and done with, it seems. Irons is a terrific embodiment of the callous but charismatic man in a suit. Tuld is crass but well spoken, steely-eyed but jovial. It’s no wonder that he stays on top of the dog-eat-dog players at the firm, among whom is the shrewd, snaky Cohen (Simon Baker). 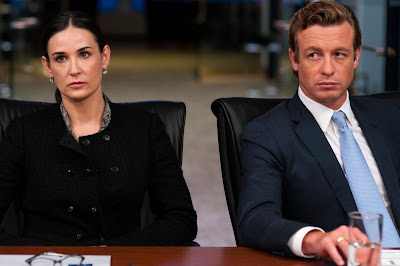 Not all the top-level players are so confident, though, as they know someone will have to go down with the firm. Standing out among the A-grade cast members of Margin Call are Kevin Spacey and Demi Moore as the two of Tuld’s minions with a moral center. At first, Sam Rogers seems like another of the slick sleaze balls that Spacey plays so well. As the film progresses though, and the strain of the deals breaks through Spacey’s straight-talking demeanour, Sam looks to be the only man standing up for the ninety-nine percent. Ditto Demi Moore, who offers perhaps the film’s finest moment when Chandor holds a long reaction shot on her, allowing the audience to watch Sarah’s cool calculated shield disintegrate when the axe comes to fall and her world collapses. In moments like this one, Margin Call is a punch in the gut.
As further deals go down in the late hours and behind closed doors, Margin Call offers a white-knuckle Wall Street thriller. It’s harrowing to watch such a ballsy dramatization of the recent economic turmoil. Whether Margin Call is an accurate depiction of the events that set the recession into motion is irrelevant, though, since the implications of the choices made by these top-tier players resonate strongly with the recent protests of the ninety-nine percent. Margin Call is one of the must-see films of the year.
Margin Call is currently playing at the World Exchange Empire 7.
Posted by Pat Mullen at 12/06/2011 11:45:00 AM