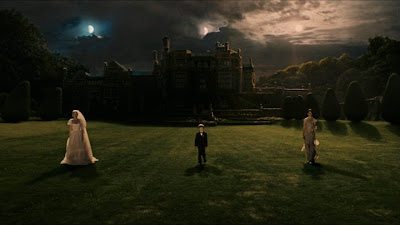 Certifiably insane director Lars von Trier strikes another chord of brilliance with Melancholia, a film that has rightly been dubbed the most beautiful rendering of the end of the world. Like his previous works Breaking the Waves, Dancer in the Dark, Dogville, and, most recently, Antichrist, von Trier puts his leading ladies – and viewers – through a fit of madness. While Melancholia is not exactly the psychological hell of, say, Antichrist (thank God), it nevertheless offers the director’s unrelentingly bleak vision in full force, accompanied by sumptuous visuals and bombastic use of Wagner. As Justine (Kirsten Dunst) says of her dire fate, “The world is evil. No one will miss it.”
The end of the world may as well come soon, since the people of the world hardly seem worth saving. Melancholia presents the hedonistic follies of mankind through one family. It focuses mainly on the dual neuroses of sisters Justine and Claire (Charlotte Gainsbourg). 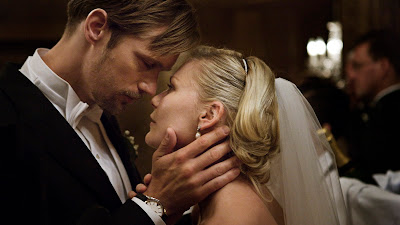 von Trier shapes Melancholia in a disarming two-act structure, shot in his dizzying Dogme style. The first chapter offers Justine’s story. It’s her wedding day, but she should be wearing black. Justine is a pouty, melancholic girl. For her, marriage to Michael (Alexander Skarsgard) seems like an escape from her unhappiness; otherwise, she might simply be too indifferent to life to care whether she says “I do” or “I don’t.”
The wedding seems to be a more important affair for the Claire, as she has organized the reception. All was for the party, it seems. Like Mrs. Dalloway, Claire is always throwing parties to cover the silence. Aka, she wants to escape her marriage to John (Kiefer Sutherland), who keeps her locked up in their opulent castle, which has its own 18-hole golf course.
As Claire frets about throwing the perfect party, she becomes increasingly high-strung during the reception. While Claire assumes the Bridezilla role, Justine gradually withdraws from the festivities. She wanders around the golf course, pees on the green, and ignores all other aspects of social decorum. Claire, John, et al worry about Justine’s evident mental illness, but heaven forbids they discuss anything. So long as everything looks nice, all is well.
Claire gets her comeuppance in Chapter 2, though. Setting the drama on the family estate once again, von Trier presents a world where everything looks nice, but awaits destruction from previously invisible forces. It’s Claire’s turn to go bonkers this time.
In Claire’s story, she awaits the end of the world. (A fate worse than throwing a bad party!) A blue planet, named Melancholia, is hurtling towards the Earth. Claire had no reason to fear Melancholia, for she knew nothing of its existence, as the big happy sun previously tucked it away. If you can’t see it, the problem doesn’t exist. Sounds like Justine’s depression. 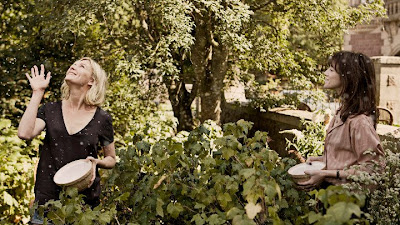 The sisters reunite and go out with a bang in typical von Trier fashion. Justine has strange visions, which, however nightmarish their content, are sumptuous and dreamy. Dunst gives an impeccably understated performance, displaying Justine’s downhearted gloom with resigned acceptance. Claire, on the other hand, goes mad as a hatter. Charlotte Gainsbourg – the only actress crazy enough to work with von Trier twice – plays her brilliantly. Gainsbourg nicely offsets Dunst’s subdued derangement by contorting her face into a broad range of fear, lunacy, and hysteria. While Dunst offers a nuanced, introspective performance, Gainsbourg chews so much scenery that any year-end prizes she receives should be served with a napkin. Worlds collide in Melancholia, but von Trier’s leading ladies complement each other perfectly.

As always, though, the real star of Melancholia is the unrelenting bleakness and cynicism of von Trier’s vision. The self-indulgence and elitism of these self-absorbed sisters suggests there is little worth preserving in this world. As shown by Lars von Trier, even Jack Bauer won’t save it. However, the mad director renders the horror in a slow moving, elegantly captured symphony, with the sisters whinnying amidst pre-apocalyptic sights. Horses frenzy and birds fall dead from the sky, but one can’t help but marvel at the beauty of it, especially as shot by cinematographer Manuel Alberto Claro, who captures the end of days with a sensitivity to light and shadow that belongs in a Caravaggio painting. Finally, von Trier’s recurrent use of Wagner adds an impending sense of doom, as well as some Armageddon artfulness.
Considering this is the same director who had a self-mutilating fox cry, “Chaos reigns!” in Antichrist, one can’t help but accept the dark cynicism with a hint of perverse pleasure. I must tip my hat to von Trier for making the gloomy atmosphere of the apocalypse so pleasing. Instead of becoming morose by the dark bile of Melancholia, I found the film as stimulating as a dose of Prozac. Congratulations Mr. von Trier: when the world came to an end, I was smiling.
Posted by Pat Mullen at 12/02/2011 10:03:00 AM