Doc is Hot to Trot 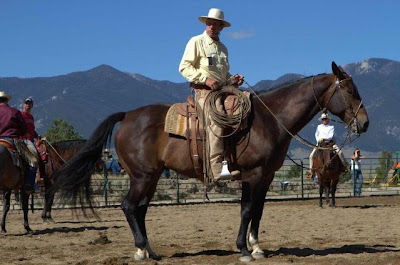 Buck scooped the Audience Award at Sundance back in January and is now ready to gallop to the winner’s circle after making Oscar's short-list for Best Documentary. It’s a sparse portrait of horse trainer Buck Brannaman, whose gentle, humane method of training horses has changed wranglers across America. This small little doc has been trotting through theatres with much success and has only one showtime left in Ottawa, so I’ll be brief. 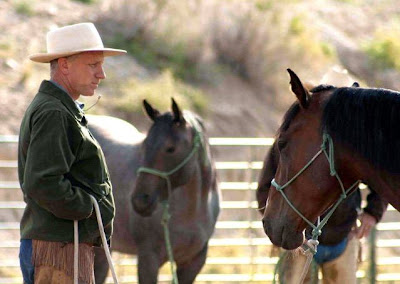 The film shows Buck’s philosophy quite fairly, offering much footage of the cowboy delivering his touring workshops, along with testimony from participants to show how Buck’s work methods have affected them. The film also provides much archival footage to explain how Buck arrived at his gentle approach. His backstory is a moving one: a child of an abusive father, Buck chose not to spread the aggression, but rather used his disdain for roughness to approach animals softly. Through Buck’s story and testimony, the film draws some worthy and insightful parallels/analogies between humans and animals. Buck also worked as a consultant on Robert Redford’s 1998 film The Horse Whisperer, so movie buffs will love the segment that uses Buck’s story to give an insider’s take on Hollywood. Comparing Buck’s method to the convoluted wrangling by Hollywood trainers shows how useful the cowboy’s laid back approach works best.
At times, the film portrays Buck as an oversized, almost prophetic character. It’s a bit odd, since he comes across as very humble at the beginning. Perhaps if the film had been consistent in its down to earth depiction of the cowboy, it might have been more absorbing; however, the testimony offered by interviewees arguably shapes this divine portrait more than any explicit effort by Buck himself, so it’s only a minor quibble. Buck is frequently exciting nonetheless.
Buck is a fun lesson on the relationship between man and beast. Well assembled, with a warm twangy score by David Rollins, Buck is an easy sell for doc fans and casual moviegoers alike. Best gallop on over to The Mayfair and catch the last 7:00 screening!
Posted by Pat Mullen at 12/15/2011 09:36:00 AM