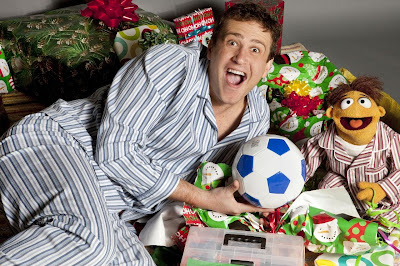 With little to see on a Wednesday night, I skimmed the options listed at the multiplex. I’d seen everything, except for the slew of family-friendly fare released for American Thanksgiving. In the mood for a comedy since I went to the movies as a respite from grading Film 1000 papers, the choice came down to Twilight or The Muppets. Preferring to escape with some dignity intact, I chose the lesser of two evils, opting for fond nostalgia of Kermit and Miss Piggy over bad memories of Bella and Edgar. Thank goodness, since I spent the night laughing like a simpleton. The Muppets brings a smile to even the most cynical face, for one can only be enthralled by the unabashed feel-goodness of the film. 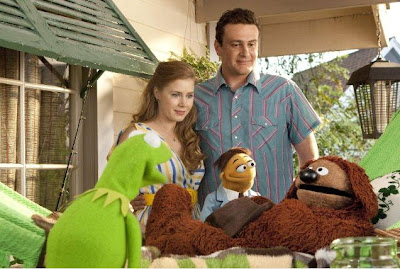 The gang reunites when Walter, a new man-puppet, goes to Hollywood with his brother Gary (Jason Segel) and Gary’s girlfriend Mary (Amy Adams), for their tenth anniversary. A devoted fan of The Muppets, Walter insists they visit The Muppets’ studio so that he can see where the magic was made. However, the studio turns out to be a dusty old relic. This makes it prime real estate for Tex Richman, an evil oil tycoon played by Chris Cooper. Walter overhears Richman’s plot. Terrified that his childhood dreams may soon crumble, Walter enlists Gary and Mary to find the Muppets and get the gang back together for a fundraiser. 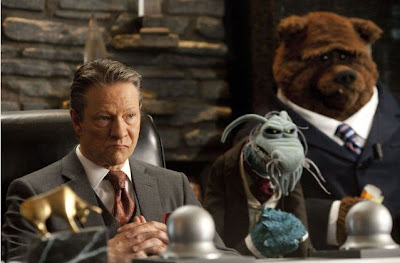 Tex Richman’s storyline puts a fun spin on The Muppets. With a maniacal laugh and a Daniel Plainview-ish plot to control the world through oil, Tex Richman offers a droll comment on American politics. Tex is obviously meant as harmless fun, rather than as hot-blooded liberal activism; however, as the yahoos at Fox Newsrecently suggested, Tex Richman is just another example of the film industry brainwashes kids with left-wing subliminal messages that encourage social conscientiousness and common sense. The bizarre controversy puts a fun spin on The Muppets and it offers an innocuous joke for the older members in the audience, unless they brought the kids in gas-guzzling SUVs.
Viewers young and old will love The Muppets, though, as the film is pure escapism. Segel and Adams provide spirited work as the humans, although their romance is outmatched by the timeless love story of Kermit and Miss Piggy. The film offers plenty of go-for-broke musical numbers, including a revival of the classic “Rainbow Connection.” The best number is the delightfully corny “Life’s a Happy Song,” which opens and closes the film. It is, however, nearly overshadowed by a cover of Cee-Lo Green’s “F*ck You” that is clucked by the Muppet chickens. The Muppets also has celebrity cameos galore, trouncing a slew of big names like Jack Black or Feist through the film. Take a shot every time a celeb walks by!
The film’s overlength and mixed tone has it teetering on the brink of disaster, but the crappy sets, amusingly cheap production values, and shameless camp balance The Muppets into smooth sailing. (Ish.) A joyful piece of liberal propaganda, The Muppets is great entertainment, whether seen with family, with friends, or as a party of one. Bring a flask, too, for The Muppets is probably a hoot to see drunk.
Posted by Pat Mullen at 12/08/2011 10:47:00 AM