Put it in a Love Song

After the awkward incident of 2009’s The Queen Victoria, which saw the French Canadian filmmaker direct a heritage film about a young British monarch, Jean-Marc Vallée returns to his native Quebec and delivers a film worthy of his breakout hit C.R.A.Z.Y. Like C.R.A.Z.Y., Café de Flore is a rich, affecting story of family ties. Café de Flore is a masterfully assembled film, tightly crafted and ingeniously realized – it’s easily the best French Canadian film of the year.

The impact of Café de Flore comes through one doozy of a plot twist. Viewers who don’t see the reveal coming might feel cheated, and I wouldn’t necessarily argue with someone who does; however, Vallée signals the turn of Café de Flore quite well, offering visual and aural keys with which one can decipher the mystery. When one discovers what’s coming at the end, Café de Flore becomes a more beautiful film, for one can appreciate the complex work of Vallée’s hand. It would do the film an injustice to reveal much; therefore, I’ll be brief, for it’s best if one approaches Café de Flore with a blank slate. 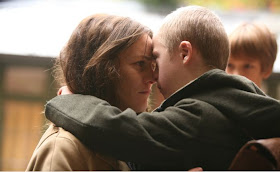 Café de Flore crosscuts between two love stories. In Paris, 1969, a young mother, Jacqueline (Vanessa Paradis), gives birth. The child has Down’s syndrome. Her husband wants to give him up for adoption, but Jacqueline refuses. Her husband leaves her, so Jacqueline devotes all her love and attention to raising her son, named Laurent, as best as possible, making every effort to ensure that he lives past his life expectancy of twenty-five years. It seems there is no love stronger than that between mother and child.
Except, perhaps, for the bond that exists between soul mates. In Montreal, 2011, Antoine (Kevin Parent) has recently left Carole (Hélène Florent) for Rose (Evelyne Brochu). Antoine and Carole had been lovers since high school, and they built a life together, creating a family and raising two beautiful girls. Antoine is okay with the parting, since he and Rose have an unmistakably strong connection. Carole, however, is devastated by the divorce, and Vallée conveys her trauma in a series of night terrors, which are startlingly unexpected, especially since the lucid moments of Carole’s dreams resemble the narrative of Jacqueline and Laurent. At times, her dreams evoke the other storyline explicitly.

Café de Flore weaves between the two narratives seamlessly. Vallée smartly creates striking parallelism and symmetry between the two love stories, allowing one to resonate within the other. His careful framing and astute use of match cuts enables one story to permeate the other, creating a dense web of a film. Much like Tree of Life, Café de Flore is highly involving and requires a great deal of sense making. It’s not quite as difficult or as complex as Malick’s film is, for the narrative of Café de Flore is consistently perceptible. Café de Flore is equally rewarding, though, especially for the high degree of artistry one sees on the part of the director. Every frame of Café de Flore is carefully composed, with the blocking of the actors extremely precise; likewise, the movement of the camerawork is stunningly orchestrated, allowing the motions of the film to flow together in a dreamy opus. The editing (by Vallée himself) accentuates the intricacy of the director’s effort in the shooting of the film, as Vallée deftly cuts the film into a kaleidoscopic experience and delicately shifts between the two time periods of the films, at times bringing them together with one fluid stroke.

While Café de Flore arguably displays one of the year’s best editing feats, the meticulously detailed soundtrack is the most laudable element of the film. Like C.R.A.Z.Y., Café de Flore features a phenomenal playlist, most of which comprises the song from which the film gains its title. The song plays a crucial role in the 1969 story, for it is a favourite of young Laurent. The song reappears in its remixed form by Doctor Rockit in 2011, as it’s a favourite of Antoine, who is a successful DJ in Montreal’s music scene. Vallée allows the songs to reverberate constantly throughout the film: he repeats them endlessly. Rather than grate on one’s nerves, though, the tune of “Café de Flore” becomes the most appreciable component of the film. When Antoine listens to the song on his iPod as he runs in a park, the film cuts back to a scene where he describes to his love for the song. Vallée smartly alters the acoustics of the song, expressing the subjectivity of the song to offer one of the many moments in which Café de Flore shows the power of music. More interesting, though, are the many sound bridges that Vallée employs to show how music connects characters and to show how songs travel and shape experiences over time. “Café de Flore” begins as a jazzy piano tune shared by Jacqueline and Laurent in 1969 Paris and then continues as the scene flash-forwards to present day Montreal, but the song gets a techno beat and pulsates throughout a party where Antoine first lays eyes on Rose. The elaborate layering of sound in Café de Flore makes the film notably evocative.
A beautiful and wholly rewarding film, Café de Flore is well worth the attention. Seeing it once is a unique experience; seeing it twice is surely a genuine treat. Café de Flore is easily one of the best films of the year.
Café de Flore is currently playing in Ottawa at The Bytowne through Dec. 29.
Pat Mullen at 12/20/2011 04:23:00 PM
‹
›
Home
View web version