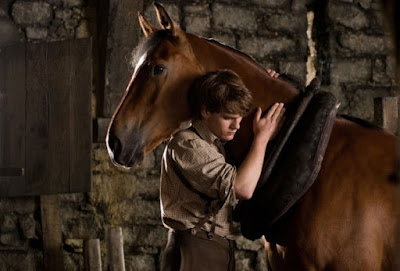 War Horse might have seemed great in the forties. Back when Hollywood restricted onscreen violence so as not to encourage public disorder, such a tidy rendition of the Great War might have seemed fair. Back when Hollywood sought to solicit a positive image of the war effort through film, such an unabashedly sentimental tale could have been appropriate. In 2011, however, Hollywood no longer has the Hays Office or the OWI looking over its shoulder, so filmmakers are allowed to tell the truth and offer portraits that reflect life as it is. Steven Spielberg did it back in 1998 with Saving Private Ryan, which is arguably the grittiest, most unflattering and most honest war film ever made. It is also the best. War Horse most definitely is not Saving Private Ryan.

Like most four-legged foals, this Horse wears blinders. Spielberg looks away from the atrocities of war and instead offers a simple and saccharine tale of battle as seen through the eyes of a horse. Instead of expressing the brutality of it, Spielberg opts for war as told through cutaways, goofy sounds, and cheap sight trick. The battle of the Somme, however, is well realized and hints at greatness; consequently, the strength of the sequence, which appears quite late in the film, reveals how much the director chooses the safe road. War Horse seems intent on perpetuating the same myths that Spielberg himself deconstructed so valiantly in Saving Private Ryan. The foul foal encourages a fond look back at the skirmish humankind had circa 1914-1918, and provides viewers with a cute little horse, which they can stroke and warmly use to see how easy life is if we all just get along. 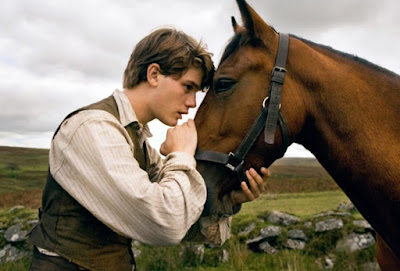 War Horse is unrepentantly sappy. It tries to rouse some jovial spirit in the tale of a young boy (Jeremy Irvine) who longs to be reunited with his horse. This horse, named Joey, trudges through the mud with both the British and German armies. He also takes shelter with some German boys and a French family, and inspires dozens of lives along the way. Please give Joey a carrot for enriching our lives so. Please give Spielberg a carrot, too, so that it might improve his vision.

The great wizard’s work on War Horse redefines the tern “over-directed,” for each frame of the film is saturated in painstaking, exaggerated effort. The film is overwhelmed by tricks and gimmicks, as Spielberg relentlessly pulls in for slow zooms on his characters’ faces as they find themselves swept up in the glory of this divine horse. Spielberg’s usually reliable collaborator Janusz Kaminski adds an air of divinity to the cinematography of War Horse. He floods the frame with enough light to illuminate a football stadium: not only is it inappropriate, but it borders upon laughable how “nice” the war looks. War Horse also pulls at heartstrings with a rousing soundtrack by John Williams. The score probably sounds great as an isolated playlist, yet it proves fatally distracting. They might as well have slapped on the bombastic chords of The Deep Blue Sea; however, that score would hardly solicit the cheery effect to which War Horse aims. 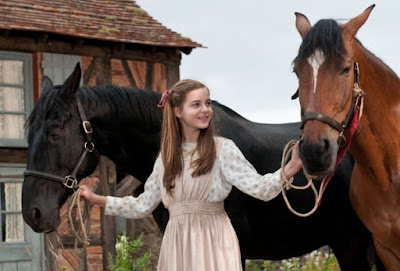 Cheesy, schmaltzy, sappy, corny, are all fine words to describe this maudlin mess. I am unfamiliar with the source material on which War Horse is based, i.e. the novel by Michael Marpurgo and the Tony-winning stage adaptation by Nick Stafford, but such a team of accomplished filmmakers is clearly capable of better. They have accomplished astonishing and inspiring work on similar subjects before, as well as done insightful and intelligent family-friendly fare. Somebody please remove this lame horse from the multiplex and shoot it.