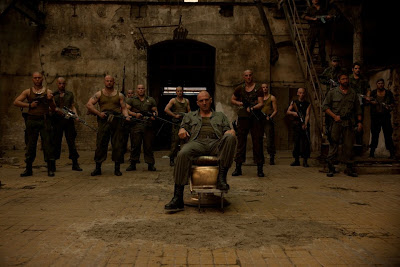 I’m sad to report that Ralph Fiennes doesn’t score as highly as a director as does Angelina Jolie. Fiennes gives a commanding performance in the title role of Coriolanus, but the film itself is not quite as forceful. Based on one of Shakespeare’s lesser-known and infrequently performed plays, Coriolanus is an odd choice for Fiennes to make his directorial debut. On one level, there has never been a film adaptation of this play. Coriolanus has been subject to a few BBC teleplays, which usually come off as little more than a play performed before a camera, but the is no big screen precursor against which one can judge Fiennes’ effort. The lack of precedent works in his favour, for even though the film is not entirely successful in its execution, one always feels a sense of discovery during Coriolanus. It’s one of the few Shakespeare plays that I haven’t read and I’m grateful that Fiennes made an effort to share more Shakespeare. 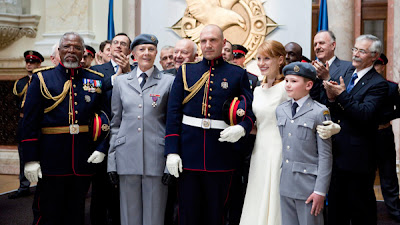 The actor stars as General Caius Martius, who receives the attributed surname Coriolanus upon his victory in battle at Corioles. Swept up in a frenzy of trendy support and some maniacal campaigning from his politico mother, Volumnia (Vanessa Redgrave), upon whom the Mrs. Islen/Shaw character of The Manchurian Candidate is surely based, Coriolanus becomes the lead contender for a seat as consul of Rome. Alternatively, in “Some place calling itself Rome,” as the opening sub-title suggests, showing us that Fiennes is taking us deep into allegory land.

There is, however, a mutiny afoot in “Rome.” Many of the Roman people are upset with the poor food rations and they have been protesting Coriolanus long before his victory. Led by some more vocal scorns from Tribune Sicinius (James Nesbitt) and the peasant Tamora (played by Lubna Azabal of Incendies fame), Coriolanus finds himself an exile, as he is knocked from the top of Rome’s tower to the city margins. Enraged by the swift coup d’état, Coriolanus seeks support from his sworn enemy, Tullus (Gerard Butler), and he vows revenge on Rome.

Fiennes delivers a hot-blooded rendering of Shakespeare’s tragedy. The actor fully and successfully realizes the chaos and brutality of war. He stages some scenes that are on par with a Kathryn Bigelow film. Think of Coriolanus as The Hurt Locker in verse. That Coriolanus invites comparison The Hurt Locker is apt, since both films were shot by cinematographer Barry Ackroyd. The visual style of both films is similar, although not quite as effective in Coriolanus as it is in The Hurt Locker. The isolated action sequences are wholly gripping and visceral; however, while the visual madness works well in the film’s action scenes, it proves fatal when employed in conjunction with the words of Shakespeare’s play. The camerawork in Coriolanus is too frenetic, too active, and too tight. The problem is that it becomes too disorienting while one attempts to absorb the verse: viewers who have trouble following the metre of Coriolanus might find the film impenetrable, as the visual aspect of the film is too busy to ensure that the dialogue is conveyed with the utmost clarity. The lighting and focus, too, are rather inconsistent, which often makes for a frustrating viewing. When Fiennes hold on the actors and allows the drama to speak for itself, however, the film succeeds. 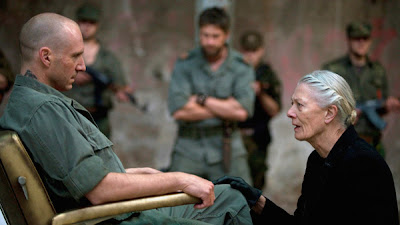 With his assembled actors, Fiennes offers a cast worthy of the finest Shakespearean production. The actor-director gives one of the better performances of his own career. However, Vanessa Redgrave easily steals the show. As Volumnia, Martius’s powerful, if slightly mad mother, Redgrave gives a towering performance. The actress delivers the verse with such force and clarity that one cannot help but think that Shakespeare wrote the part with her in mind. As with 2011’s other (and lesser) Shakespeare film Anonymous, Redgrave gives a performance worth the price of admission itself. Her work in Coriolanus is arguably superior and is easily her finest work since Atonement, if not Howard’s End. Also offering fine work is Jessica Chastain as Coriolanus’s wife, Virgilia. The role is nowhere as large or as baity as the other item on her impressive CV for 2011, but a decent credit in a Shakespeare film further displays her endless versatility.

Fiennes himself displays his versatility with Coriolanus. This directorial debut is certainly ambitious, and Fiennes’s production succeeds more than it does not. Some fault in the pacing and action might simply be a fault of the source material itself. While the effort is appreciated that Fiennes realized one of the Shakespeare’s minor works, one can only hope that it enabled Fiennes to fine-tune his skills and will soon set to work on one of the Bard’s masterpieces.