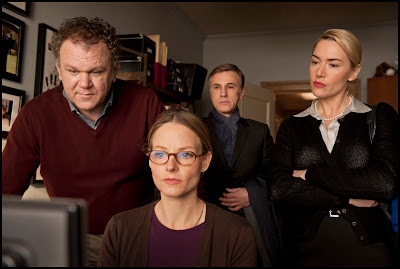 What is the loudest film of 2011? Transformers 3? Super 8? Captain America? Nope. None of these explosion-filled blockbusters is as raucous as the small-scale ensemble drama Carnage. A bombastic bitch-fest, Carnage imagines the four most detestable human beings known to man, puts them in a room with a bottle of scotch, and lets the venom spew. It’s cringe-inducing fun.
Alan and Nancy Cowan (played by Christoph Waltz and Kate Winslet) are having a civilized meeting at the home of Michael and Penelope Longstreet (John C. Reilly and Jodie Foster). The Cowans’ boy hit the Longstreets’ son with a stick, which damaged the boy’s teeth and caused other pain. The Longstreets want to settle this the old-fashioned way, talking about it like adults rather than duking it out in a lawsuit. 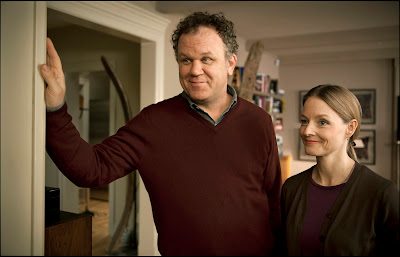 It all goes well to begin with. The parents agree on passive, non-judgemental language to word their statement of the encounter between the boys. They use the same during their obligatory post-business niceties and they slap on a smile whilst they shoot the breeze over Penelope’s apple cobbler. The attitude takes a turn, however, when a small grain of truth works itself into the conversation. 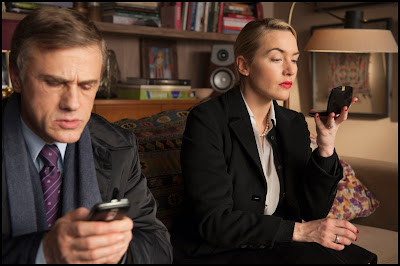 As the Cowans and the Longstreets gradually voice what they are actually thinking, Carnage offers an ugly snapshot of contemporary American fixations. This first arises in the supposed differences between the couples. The Cowans appear more affluent and privileged than their hosts do: Alan, a lawyer, unsheathes his Blackberry relentlessly during the jovial meeting, prompting looks of disgust from his hosts and his wife. While Alan wields his modern-day weapon on civil decorum, Nancy, an investment broker, is the epitome of highbrow indifference: the character is so determined to please the others and be non-confrontational that Winslet barely moves a muscle as Nancy coasts through the meeting in her pleasant “smile-and-nod” mode. Waltz and Winslet are a fine match as the Cowans: usually treated to gleefully over-the-top roles, such as his Oscar-winning turn in Inglourious Basterds, Waltz offers the funniest performance with his droll, sardonically uninterested portrayal. Winslet, on the other hand, offers a fine feat of scene-chewing, delivering Nancy’s high-faulting’ rants with a verbose, menacing slur. (She also gets top marks for projectile vomiting.) Winslet’s gradual removal of Nancy’s polite mask is one of the best ways in which Carnage stabs at the false veneer of bourgeois Americana.
Different than the Cowans, but not dissimilar, are Mr. and Mrs. Longstreet. More middle-class than the other two Manhattanites, the Smiths seem simple and sincere. Placating the powerful Mr. Cowan in order to avoid a countersuit, the Longstreets appear to be a nostalgic view of the happy American couple, like Don and Betty Draper before the divorce. However, when the discussion becomes a bit too sensitive, the bleeding-heart liberal Penelope reveals herself more high-strung and hypocritical than Nancy seems to be. Likewise, Michael Longstreet comes off as the antithesis of Alan Cowan – i.e. a simpleton Joe Schmo who is more likely to take a call from his mother than from his lawyer. Both Michael and Alan, however, are members of the old boys club, as the scotch and cigars suggest. Like Winslet and Waltz, Foster and Reilly are well cast as husband and wife. Foster is shrill and manic as Penelope, while Reilly exploits Michael’s doofusness to good effect. Carnage is acting heaven (or hell) with Winslet, Waltz, Foster, and Reilly chewing it out à la Taylor, Burton, Dennis, and Segal in Who’s Afraid of Virginia Woolf?. 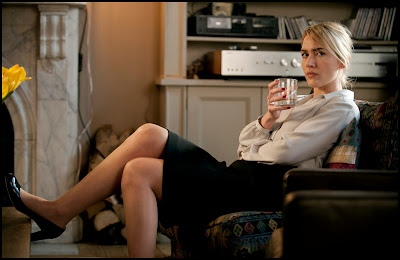 Based on the play God of Carnage (Le dieu du carnage) by Yasmina Reza, Carnage is, like many stage-to-screen adaptations, both stagy and talky. Rather than succumb to the theatrical feel, Polanski exploits one’s desire to see the drama move beyond the confines of the Longstreets’ Manhattan apartment. Carnage teases the viewer by releasing characters from the set, only to pull them back in: an offer for coffee thwarts one attempt, a lingering question voids another exit, and so on. Carnage appropriates the claustrophobic dynamic of the film’s origins and makes it another element of one’s discomfort.
Carnage is all about putting the viewer in a state of unease. Things are nice, simple, and pleasant when the drama begins: a smile or chuckle is afforded in the early scenes, but little else, as it would be impolite to react otherwise in a crowded theatre. However, as the film progresses and viciously tears down all social pleasantries, the madcap efforts of the ensemble solicit genuine belly laughs and guffaws.
Screw the other theatre patrons. Go laugh your ass off at Carnage. If anyone hisses ‘sssh’ as you chortle at the zany antics, take a cue from Nancy and “wipe your ass with their human rights.”
Carnage opens at The ByTowne in Ottawa January 27. It is currently playing in Toronto at the Varsity and TIFF Bell Lightbox.
*Photos by Guy Ferrandis, courtesy of Sony Pictures Classics (via Mongrel Media)
Posted by Pat Mullen at 1/04/2012 02:43:00 PM