Hail to the Streep! 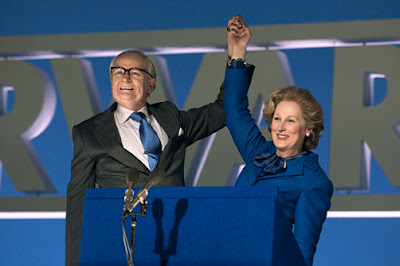 Hail to the Streep! The Iron Lady is a landslide victory for the great actress. Meryl Streep offers another terrifyingly spot-on incarnation of a real life subject. Her turn as Margaret Thatcher truly is the stunner that pundits expected it to be when it was first announced that the actress would play Britain’s controversial ex-PM. While Streep captures her subject both in terms of impersonation and mimicry, her performance, much as was the case with her Julia Child in 2009’s Julie & Julia, offers a unique subtlety in personification and temperament. Streep make Thatcher a character in her own right while still staying true and respectful to her. 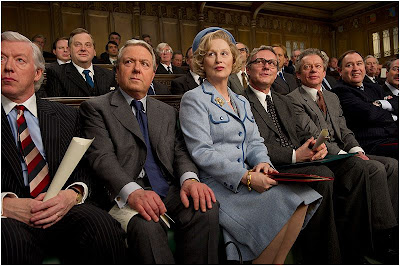 Much like J. Edgar, The Iron Lady takes a retrospective look at the life and career of its subject via a series of well-framed flashbacks and crosscuts. The film also begs comparison to the Hoover biopic thanks to its impressive, if not superior, make-up work that ages Streep and makes her the spitting image of the Iron Lady. While J. Edgar offers the more conventional angle of having Hoover dictate his memories, The Iron Lady sees the present-day Margaret Thatcher at home in London, alone in her flat with her memories. Miss Thatcher, now suffering from dementia, struggles with accepting the death of her husband, Denis. Played by Jim Broadbent, Denis appears throughout the flat as Margaret tries to come to terms with his death, which happened eight years prior to the story time, and throw out his old things at the behest of her daughter, Carol (played by a terrific and unrecognizable Olivia Colman [Tyrannosaur]).
As Margaret sorts through Denis’s belongings, her mind shifts back to the early days of her marriage and career. The flashbacks show that Thatcher came from simpler backgrounds and she faced a genuine struggle in advancing her career. The daughter of a common grocer, Thatcher’s colleagues thought she was too pedestrian to be a Member of Parliament; moreover, her status as a woman excluded her from much of the old ‘Boys Club’ aspects of British politics. As played by an impressive Alexandra Roach, the young Margaret seems earnest and idealist. The Iron Lady suggests that Thatcher began her career as a woman highly in tune with the people; being a grocer’s daughter, she always knew what the average citizen paid for milk and butter.
The film also shows that Denis was quite instrumental in advancing Margaret’s career. An admiring classmate of Margaret’s, Denis asks Margaret to marry him, both for love and for the sake of her political chances. As Margaret protests, though, she will never be one of those women who stay home and do the dishes. Denis agrees, saying that is exactly why he married her. 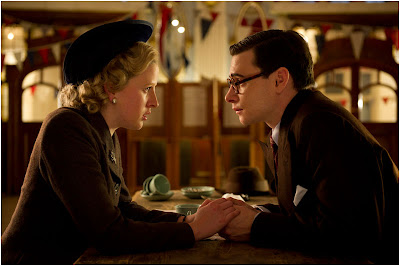 Such is the angle of The Iron Lady. Like J. Edgar, it puts a love story as its main drive. It is frequently effective. More importantly, the film shows that Thatcher genuinely broke barriers and overcame considerable odds in her ascension to power. Despite whatever drawbacks resulted from her policies, the film shows that audiences can and should appreciate how much she broke through gender divides. Consequently, the film often sidesteps the more volatile aspects of Thatcher’s persona in order to portray her career favourably.
It would be rather unfair, however, to outright dismiss The Iron Lady for the positive spin it puts on Thatcher’s career. All biographies must take an angle on a subject and this choice inevitably results in a skewing of politics to one side or the other. Finally, it would simply be in poor taste for Lloyd, Streep, Morgan et al to lambast Thatcher’s legacy since the PM is still living, but no longer in a mental state that allows her to judge the film and respond to it fairly. 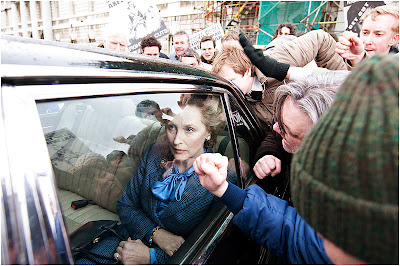 While The Iron Lady frequently encourages a favourable reading of Thatcher’s career, it nevertheless acknowledges alternative readings of her policy and regime. While the drama of Morgan’s script often plays the greatest hits of Thatcher’s career, Lloyd includes much archival footage that shows the public’s admonition of Thatcher’s policies. The added element of reality afforded to the newsreel footage shows that the facts of Thatcher’s reign will always be on public record, and thus the film hardly ignores the outcries to Thatcher’s term in office. The film is often quick to offer a dissenting voice, only to then have Streep quickly cut the outspoken party down to size. 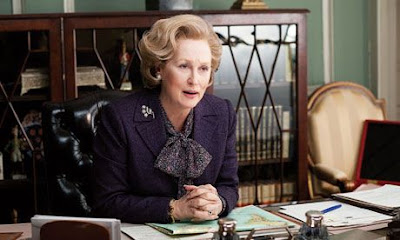 In this sense, the film acknowledges Thatcher’s problematic choices, however superficially, and it then uses Thatcher’s brash leadership style to suggest that her bull-headed persona was ultimately her downfall. It is problematic that the film elides weighty questioning of the social discord (and a bit disappointing since screenwriter Abi Morgan dared to probe so deeply in her other 2011 script, Shame) and puts the burden squarely on Thatcher herself. As a result, though, the strength of Streep’s performance offers a fine, sympathetic reading of the ex-Prime Minister as she reviews her legacy via her muddled memories.
The Iron Lady might benefit through comparison to another affecting biopic about a controversial politician from the Twentieth Century. That film, surprisingly, is Downfall, the 2004 film by Oliver Hirschbiegel that actually made viewers sympathize with Hitler. This is not to say that Thatcher is as bad a person as Hitler or that The Iron Lady is as good a film as Downfall, but as a work of art, The Iron Lady does an impressive job in finding the humanity and fortitude of a polarizing figure. If viewers could shed a tear for Hitler, they can sympathize with Thatcher. 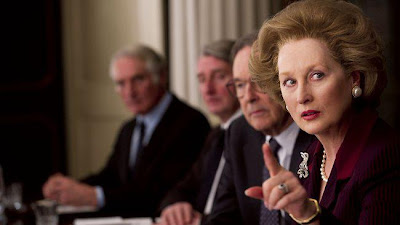 More than anyone, Streep deserves praise for conveying both sides of Margaret Thatcher. She brings out Maggie’s quick-tongue and oft-wagging finger to show how this wife and mother shook up Britain’s Parliament. As always, though, Streep excels best in close-up. Particularly in one of the film’s later scenes, when Thatcher loses her cool and bullies her allies, Streep brings together a complex and objective portrayal of Thatcher: her motivation is clear, yet Streep shows how Thatcher’s strong personality was, at times, incompatible with the qualities required of leadership. Nevertheless, Streep’s full-dimensioned portrait provides a strong-willed woman who broke gender barriers and persevered in face of adversity, as well as one who was too stubborn and obstinate, and perhaps lost sight of the principles that first led her to lead. Despite her tumultuous career, The Iron Lady not only shows that Margaret Thatcher always knew the price of a pint of milk, she is also just another woman who does the dishes.
The Iron Lady opens Jan. 13
Posted by Pat Mullen at 1/12/2012 10:38:00 AM