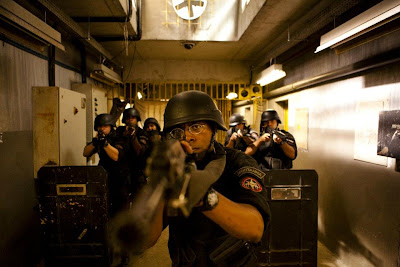 Quite possibly the biggest film sensation to come from Brazil yet, Elite Squad: The Enemy Within finds its way to Canada after racking up a slew of awards and become the highest-grossing film of all time in its native country. It’s no wonder that audiences and critics alike have responded to this sequel so strongly. One need not have seen the first Elite Squad to appreciate this energetic, thoroughly entertaining film, which offers a potent condemnation of the systemic injustices that have long run rampant in Brazil. Elite Squad: The Enemy Within, Brazil’s worthy submission to the Foreign Language Film category at this year’s Oscars, is unquestionably a high-octane action-thriller, but it’s undoubtedly much more, too. 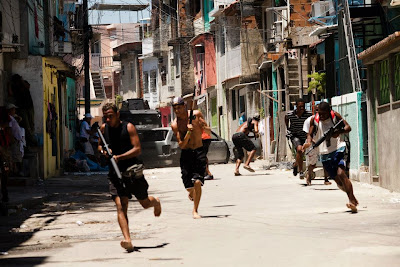 Brazilian cinema certainly got a big boost back in 2002-2003 when Fernando Meirelles and Kátia Lund’s City of God caused a worthy stir through its formalist rendering of youth crimes in the favelas of Rio de Janeiro. Elite Squad: The Enemy Within similarly offers a story of the brutal violence and crime within Brazil’s slums; however, this film shows it from a different angle and it takes an alternate approach. Moviegoers expecting the dizzying swish-pans and rapid-fire editing of City of God may find themselves disappointed, yet the taut, seemingly straightforward telling of Elite Squad suits the film better. The convention of Elite Squad is hardly a bad thing, either, for the film has excellent production value and it is on par with many high-budget Hollywood action films. Elite Squad is less City of God and more Bad Boys 2, but with a purpose. 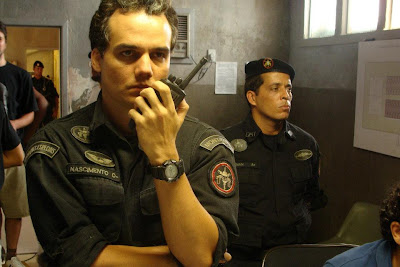 The action begins with a chaotic prison riot. Several inmates have taken control and are eliminating rival gang members while taking other inmates hostage in hopes of negotiating an exit. At the same time, civil rights activist Fraga (Irandhir Santos) is giving a lecture on the flaws of Brazil’s penal system. He argues that unless the country curbs its approach to crime, 90% of the population will be behind bars in the near future. He is quickly called away from class, though, and the governor asks him to intervene in the riot in hopes of ending the standoff between the inmates and the guards without bloodshed. The negotiation goes horribly wrong, however, and Fraga exits the prison with an inmate’s bloodstains covering his T-shirt, which says, ironically, “Human Rights.” 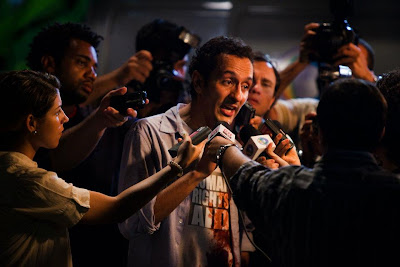 Rather than offer Fraga’s perspective of the execution, though, Elite Squad: The Enemy Within tells of the fallout through the point of view of Lt. Colonel Nascimento (Wagner Moura), the supervising officer of the force that won the standoff with the inmates. The film offers Nascimento’s thoughts on the policy of Brazil’s elite squad BOPE, which has a policy of “shoot first, ask questions later.” (As the open titles of the film state, while this film is a work of fiction, it heavily corresponds to real events.) His voice-over is incongruous with the onscreen action and the ironies of his statements illuminate some of the flaws that allow such systemic wrongs to exist. While some films blur the line between cops and criminals, Elite Squad erases the line altogether.
At times, Elite Squad: The Enemy Within is a bit too blunt with how it takes aim at the system. There are also a few moments where the anthemic rock score almost glorifies the same brutal violence that the film seeks to condemn. Nevertheless, one should applaud the film for being so potent, both in action and in thought. Elite Squad: The Enemy Within is a solid action film.
Elite Squad: The Enemy Within is currently playing in Ottawa at TheBytowne
Posted by Pat Mullen at 1/06/2012 04:02:00 PM