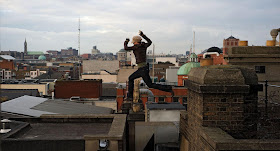 Haywire offers some good old-fashioned butt kicking. This latest caper from Steven Soderbergh is a genuine old-school action film. It’s sleek and stylish, but also very talky. The film features a car chase, and some fast-paced action, but most of the thrill of Haywire comes through the unexpected punches that Soderbergh et al throw throughout the film. Haywire proves that a filmmaker can deliver something new by using old favourites as inspiration, rather than simply rehash esoteric gimmicks in black and white. 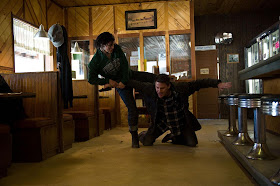 Haywire stars mixed martial arts and “American Gladiator” star Gina Carano in her first lead film role as Mallory Kane. Mallory is a privately contracted black ops soldier. The film begins with what appears to be a reconnaissance step in her next mission, as Mallory surveys a roadside diner before entering. She then makes contact with Aaron (Channing Tatum), so it then seems like her mission is already underway. After a series of unfortunate events, Mallory finds herself on the lam with a hostage named Scott (Michael Angarano). As Mallory drives and Scott repairs the gunshot wound on her arm, Mallory explains that her previous mission went bad. Haywire then cuts back to Barcelona and explains how Mallory’s current predicament began.
Telling the story in non-linear fashion, the screenplay by Lem Dobbs (who previously collaborated with Soderbergh on the exceptional The Limey) jettisons the action from Barcelona to Ireland and from mainland USA to the beaches of Majorca. Haywire also jumps back and forth from different stages of the mission, which show Mallory in action and various players plotting with deceit behind desks and closed doors. 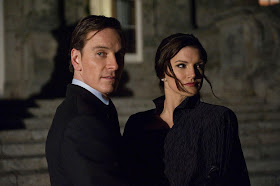 The film’s greatest sequence occurs at the midpoint of Mallory’s mission. Kenneth (Ewan McGregor), Mallory’s boss and former flame, sends her on a routine mission to Dublin. “Simple babysitting stuff,” he says. In Dublin, Mallory teams up with MI:5 agent Paul (Michael Fassbender) and they pose as a pair of newlyweds while surveying the crowd at a posh Irish castle. It’s in Dublin, though, where shit goes down. Mallory finds herself betrayed, and with a quick punch to the back of the neck, she finds herself set-up. 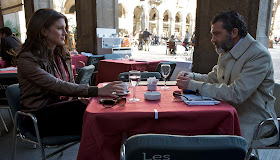 As Mallory, Carano looks to be one of the hottest up-and-coming action stars. She holds her own in her first leading role, facing off with a roster of stars like McGregor, Fassbender, as well as Michael Douglas and Antonio Banderas – there hasn’t been so much A-list talent in a film since Soderbergh’s Contagion. At times, one can’t help but wonder what someone like, say, Angelina Jolie might have done with this character, but whatever Carano lacks in delivery she makes up for in physique, skill, presence, and believability. This is a mostly physical performance, anyways, and Carano packs a mean punch. 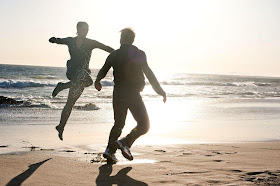 All the action of Haywire comes through the small-scale fistfights between Mallory and her male counterparts. Carano throws and takes some bareknuckle blows, and she and Soderbergh deliver some thrillingly intimate and well-choreographed action scenes. They have an impact through the film’s playful dose of realism, rather than the gratuitous visuals on which most action films rely. All the special effects of Haywire, rather, are the flairs of Soderbergh’s camerawork (he once again shot the film as Peter Andrews) and editing (Soderbergh again, credited as Mary Ann Bernard). Haywire has the stylish look of a caper from the Seventies, which composer David Holms complements with a jazzy score. Soderbergh orchestrates some great visuals, offering some of the action is thrilling long-takes and tracking shots.
The tone of the film, however, might ultimately be too subdued for some members of the audience. There’s much dialogue amongst the small-scale pizzazz. There’s even a tumbleweed that floats though the background of one scene, if you’re lucky enough to spot it. In short, moviegoers looking for style and substance will not be disappointed, especially if you favour the latter.
Rating: ★★★½ (out of ★★★★★)
Pat Mullen at 1/29/2012 10:17:00 AM
‹
›
Home
View web version